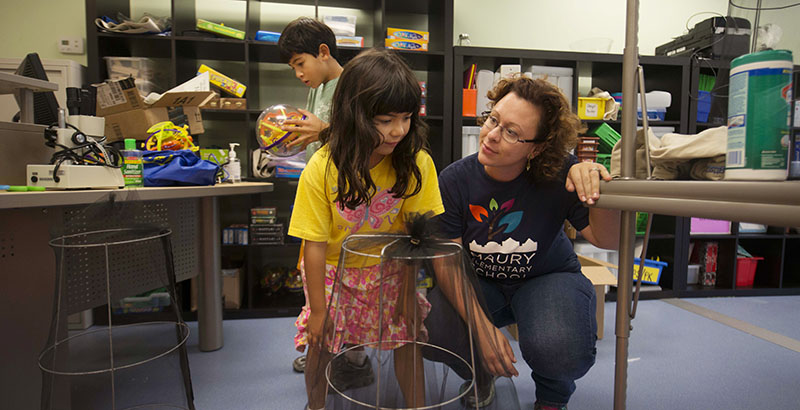 Amanda Voisard for The Washington Post via Getty Images

When Nilda Irizarry was a sophomore in her Springfield, Massachusetts, high school, she didn’t raise her hand and she didn’t participate in class discussions. Although she loved learning, she was certain she didn’t fit in.

But her teacher Patricia Gardner saw something very different. One day, she pulled Irizarry aside and asked why she didn’t speak up more, because she was such a good writer. Irizarry said that she didn’t feel smart and didn’t want to be embarrassed.

“‘No, your ideas are worthy,’” Irizarry recalled Gardner saying. “‘You need to know you can do this.’”

Irizarry — now a middle school principal in Farmington, Connecticut — didn’t have a term for it then, but her teacher was acting as an “emotion scientist,” a new phrase that describes what some educators have been doing for a long time: investigating what lies behind student behavior. If you haven’t heard the phrase, you probably will soon. The concept — coined by Marc Brackett, director of the Yale Center for Emotional Intelligence — is becoming increasingly popular through its use in the Center’s social-emotional learning program, RULER. Helping students and teachers investigate their emotions can lead to healthier humans and better learners, Brackett said.

Brackett has used the phrase for several years, but he really only started to explicitly define it as he was writing his book, Permission to Feel, to be released in September. When Brackett talks about “emotion scientists,” he often contrasts the phrase with “emotion judges” — people who are quick to label someone else’s emotions or dismiss them without figuring out what’s behind their reactions.

He estimates that the world is likely filled with far more emotion judges than scientists because it’s much easier to quickly make assumptions about someone else’s feelings. But this can create problems in schools if educators and students incorrectly make assumptions about each other’s feelings and experiences — and subsequently make decisions based on those false inferences.

A teacher, for example, might think a student with his head on his desk is bored and being disrespectful. In reality, that student might be depressed or tired. If the teacher doesn’t first investigate what the issue is, there’s a risk that the underlying problem will go unresolved, Brackett said.

“How many times have any of us been misread?” Brackett said.“It’s a big ‘aha!’ for teachers because they realize how frequently they probably are misreading students.”

Irizarry, who now works at Irving A. Robbins Middle School and attended the RULER training with Brackett this summer, discovered that she was finally able to put a label on how her teacher had helped her years ago.

“She acted as an emotion scientist,” Irizarry said. “I didn’t realize that until the training. She sought to know me as a person and a learner.”

The work requires teaching both educators and students to ask themselves questions about how they’re feeling, why they might be feeling this way, and how they can regulate their feelings so that they can continue teaching and learning. For teachers to be able to set aside their own feelings to address uncomfortable student behavior, they also have to be trained on how to understand and regulate their own emotions, Brackett said.

Adrienne Wheeler, assistant principal of Justus C. Richardson Middle School in Massachusetts, who also attended the RULER training at Yale, sees this work as important for not only her teaching staff but also the students who are sent to her office for discipline. Before staff meetings, for example, Wheeler plans to use the “Mood Meter,” a RULER tool that allows staff to privately share their energy levels and emotions. This then helps Wheeler understand what her team members need before she puts them to work.

It’s important to build a relationship with students, Wheeler said, so she can figure out the root cause of misbehavior. Often after summer vacations or long breaks, students might act up more frequently because something may have changed in their family life while away from school. Asking questions to understand this greater context is important to addressing the real problem, she said.

“Emotion scientist” might sound like an oxymoron — after all, can something as intangible as a feeling be understood? Some of the educators Brackett has worked with have also been skeptical, questioning whether it is really necessary to invest time toward dissecting emotions during a school day packed with academics. And Brackett admits this work does take time.

But educators like Wheeler who have seen how emotions affect academics aren’t surprised by the phrase.

“When I think of science, I think of an action and a reaction, and for every cause there’s an effect, and I see a correlation there with emotions,” Wheeler said.

Both Wheeler’s district in Massachusetts and Irizarry’s district in Connecticut are adopting the RULER approach to social-emotional learning this year, but both said they’ve been practicing this kind of work in their schools already. Research shows that having support for social-emotional learning in school can boost academics, increase graduation rates and improve student well-being.

“Helping students collaborate, be autonomous in the classroom — all of those things are emotionally based,” Irizarry said. “Emotional intelligence is as important as academic intelligence.”

Disclosure: The Chan Zuckerberg Initiative provides financial support to RULER and The 74.