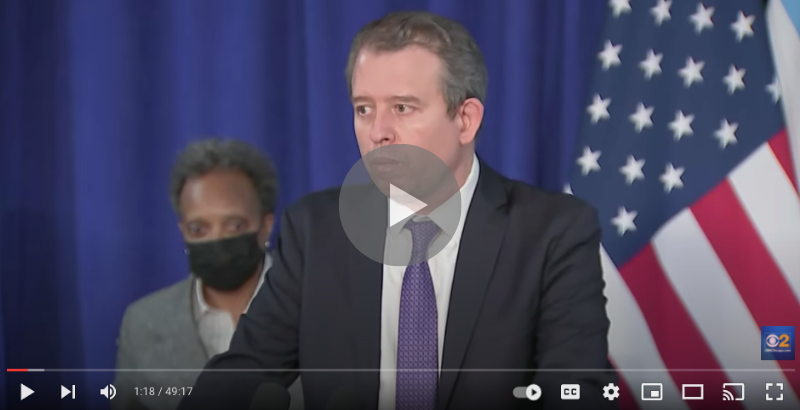 Chicago Public Schools CEO Pedro Martinez and Mayor Lori Lightfoot addressed local media Tuesday evening, just ahead of a vote by the Chicago Teachers Union to return to remote learning for two weeks, unless the number of positive COVID-19 cases decline or an agreement is reached with the district over safety precautions.

Watch a full replay from the hearing:

Lightfoot compared the situation to the movie “Groundhog Day,” insisting “there is no basis in the data, the science, or common sense for us to shut an entire system down when we can surgically do this at a school level.”

Martinez emphasized the district’s empowerment of school principals: “There is no evidence [that schools aren’t safe]. Now, what is real is cases are rising and we have said, the best solution is to do it at the school level. Our principles are empowered, our teachers are empowered, they have safety committees, we have invested in the filtration systems…”

CTU spokesman Chris Geovanis said that while some schools implement all COVID mitigation strategies, not all do.

Geovanis said the union doesn’t hold Martinez responsible for the lack of agreement and instead faults Lightfoot, who has control over the school district. “It says nothing about Pedro. He’s not the boss,” ​​Geovanis said, accusing the mayor of wanting to appease parents in wealthier parts of the city, saying she’s siding with “the business class who relies on CPS for free child care.”

Shortly after the press conference CTU voted to halt in-person instruction, and classes were immediately canceled on Wednesday as a result. Read Linda Jacobson’s full report on the reactions to the Tuesday evening vote.