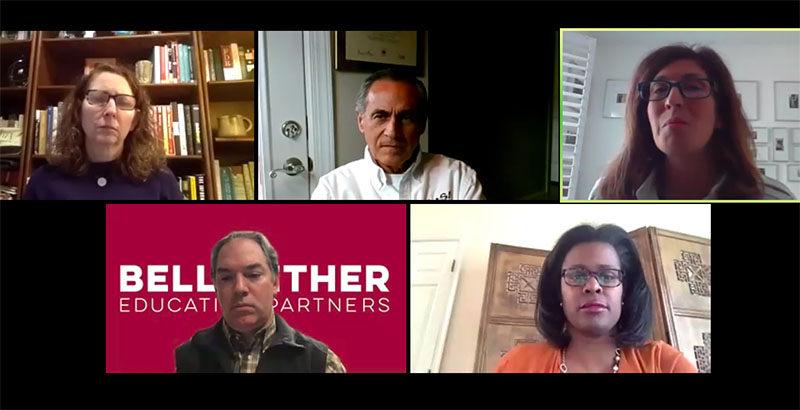 When federal lawmakers recently agreed to pump billions of dollars into America’s schools, Daniel Domenech was disappointed. Given the widespread disruptions to schools as they closed their doors due to the coronavirus pandemic — pivoting to online learning while offering additional supports like free meals — top education leaders say schools need at least 10 times as much funding as they’ve been given.

Domenech, executive director of AASA, The School Superintendents Association, said schools will need more than $200 billion, a significant hike from the $13.5 billion lawmakers earmarked for schools last month. In a letter earlier this month, AASA and 11 other national education groups called on federal lawmakers to invest in a significant increase in schools, including at least $175 billion in emergency funding to states to stabilize their K-12 education budgets.

“That’s the amount of money that schools are going to need as we go forward into next school year to deal with the many cost factors that have emerged,” from cleaning schools to buying new technology for the transition to online learning, Domenech said Thursday on a webinar hosted by the nonprofit Bellwether Education Partners. On the webinar, Domenech and other top education leaders discussed how schools have handled the virus-induced disruptions up to this point — and predicted they may never be the same.

Under the $2.2 trillion federal stimulus law passed last month, districts can use the funds to transition to online learning and to bolster special education and mental health services. The package included an additional $3 billion for governors to distribute to K-12 schools and colleges.

During the Bellwether event, Domenech pleaded with lawmakers to fund school employee retention efforts and paid sick leave. He expressed concern about what would happen to employees who are not currently on the job if schools continue with online instruction into the next school year.

“How do you continue to pay them?” he asked, noting that the last stimulus bill “completely overlooked the needs of government workers and school district employees.” While lawmakers are “taking care of the private sector in terms of allowances for pay and allowances for family leave,” he said, they “did nothing to deal with the needs of public school employees.”

Nina Rees, president and CEO of the National Alliance for Public Charter Schools, offered a similar sentiment, though she described the current level of aid as “not insignificant.”

“This last relief package was seen as a Band-Aid to stop the bleeding around industries that were suffering immediately,” she said. “The amount that we received was not as much as we should have received.”

Despite what the leaders described as widespread financial need within the education community, school leaders across the country transitioned their approaches quickly during a moment of unprecedented uncertainty. But the shift exposed long-standing inequities, Domenech said. While most schools weren’t ready for the transition to online learning, districts in wealthier communities were better positioned than low-income systems.

In Baltimore, district leaders moved quickly to address their “essential first steps,” including ensuring that students were fed, said Sonja Santelises, the district’s CEO. The Baltimore City Public Schools offers up to four free meals a day to students who need them. Then, the district sought to innovate. For example, when it came to distance learning, the district turned to public access television, where reading, math and science lessons are being broadcast for students in grades K-8.

“We knew we could not only rely on Chromebooks,” she said. Because many children lack technology at home, she said, district leaders had to get creative. Some strategies, she said, have been “low-tech.” One high school teacher, for example, used the social media platform Instagram to connect with her students. “We’ve used some of those folks who are far more adept with technology, with connecting, to then help train their peers.”

“If there was only one thing I could do as a school leader — I couldn’t do anything other than one thing — it would be reading,” she said. “Listening to books, even if you cannot read, that has profound educational advantages.”

School leaders predicted the coronavirus would leave a major footprint on America’s public education system. The nation’s experiment in online education will bring with it lessons that will likely carry into the future.

“I think we’ve seen that online learning is the future,” Domenech said. “This is a time to move into the 21st century aggressively.”

Disclosure: Andrew Rotherham, co-founder and partner at Bellwether Education Partners, serves on The 74’s Board of Directors. Campbell Brown, The 74’s co-founder, serves on the Success Academy Charter Schools Board of Trustees. The 74 and the National Alliance for Public Charter Schools receive financial support from the Bill and Melinda Gates Foundation, the Doris and Donald Fisher Fund, the Walton Family Foundation and the William E. Simon Foundation.