Thousands of charter school parents across New York City are trying to get their mayor’s attention.

The letter initiative was organized by Families for Excellent Schools, a lobbying group that advocates in support of charter schools. “All public school students deserve access to public space. Please give our kids the space they need to learn,” the letter states. 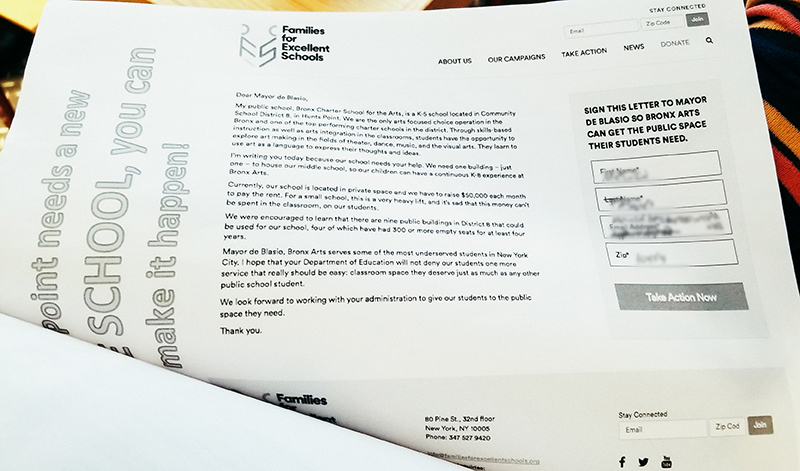 Several parents rallied at City Hall Thursday to deliver more than 3,500 signed copies of the form letter; the Daily News reports that additional letters are expected to arrive via email and snail mail.

City charter leaders had set a deadline of September 1 for the mayor to respond to their requests for space for the 2018–19 school year, the Daily News reported. The requests have not been approved, leaving administrators unable to formalize plans for their schools or inform families about the developments.

“Enough is enough — public charter school families need the de Blasio administration to identify space for their children no later than October 13th,” said Families for Excellent Schools CEO Jeremiah Kittredge in a statement emailed to The 74.

Some parents have stated publicly that they’re frustrated because they don’t know where their future school will be located.

“I think it’s unfair to have charter school parents in this limbo,” Miriam Reyes of East Flatbush told the Daily News. Reyes’s son son attends Success Academy Bergen Beach charter school. She wants him to attend a new Success Academy middle school next year, but the school is one of several waiting for location details from City Hall.

A spokesman for the New York City Department of Education, however, says the process is more complicated than just matching schools with available empty spaces.

“When siting a school in a DOE building, whether district or charter, we believe in a lot of community engagement,” said Michael Aciman via email. “Public feedback and open meetings are important to a successful schools siting. We’ll continue to closely coordinate with each charter organization requesting space.”

Here’s the full text of the letter that parents signed:

I am a resident of New York City and a supporter of public charter schools.

No public school student should be shut out of public space. It is your duty to provide equal access to every student in their care, and bias against some of the kids in your public school system is unacceptable. 112 schools across NYC have been sitting half empty for years, but public charter school kids haven’t been given classroom space.

Mayor de Blasio — all public school students deserve access to public space. Please give our kids the space they need to learn.

Laura Fay is the engagement editor at The 74.