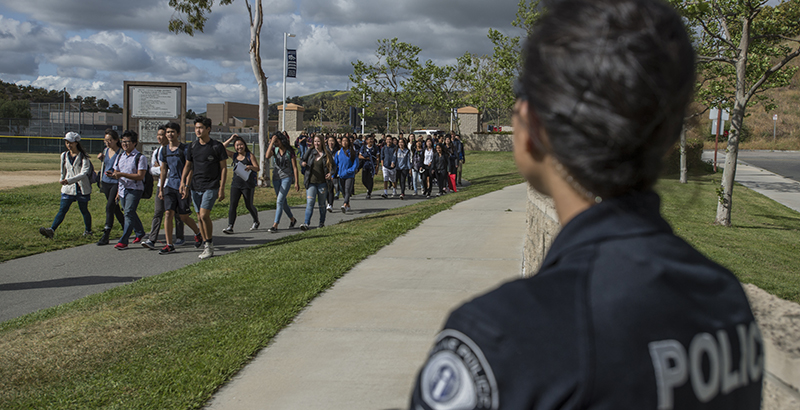 In a predominantly white and affluent suburban community, school resource officers worried most about intruders. Yet in an urban district made up predominantly of students of color and those who were low-income, police perceived students as the primary threat.

Juvenile arrest rates were similar in both communities, suggesting the results weren’t motivated by the prevalence of crime. Instead, researchers suggest, implicit racial bias among school-based police could be at play. But the divide suggests a problem that transcends a few “bad apples,” one that could be “baked into the system,” said Ben Fisher, an assistant professor of criminal justice at the University of Louisville.

“It’s not necessarily individual officers, but it’s sort of the way that people, and especially law enforcement, make sense of what counts as criminal,” he said. While police tend to view places with large concentrations of people of color “as more dangerous and scary,” the opposite is true in areas that are predominantly white, where they view people as “pure and deserving of protection,” he said.

Fisher is lead author of the forthcoming, peer-reviewed report, which has been accepted for publication in the academic journal Social Problems.

The findings are particularly timely given the nationwide protests for criminal justice reform following George Floyd’s death at the hands of Minneapolis police. That movement has since expanded to the schoolhouse: Earlier this month, the Minneapolis school district cut ties with the city’s police department, ending a long-standing agreement that stationed officers on campuses. Education officials in Portland, Oregon; Denver; and Charlottesville, Virginia, have since announced similar plans. In Madison, Wisconsin, the teachers union urged the district to remove campus police from the city’s high schools and replace them with counselors and psychologists.

The union, Madison Teachers, Inc., previously backed school police in the high schools “to create safe places for our students and staff,” it said in a statement. “However, it has become apparent from conversations with our children and community that the benefits of having police officers stationed inside our schools is outweighed by the racialized trauma experienced by some of our community members of color.”

Racial stereotypes likely shape how school-based officers perceive threats on campus, according to the first-of-its-kind study, funded through a grant from the Department of Justice’s National Institute of Justice. Researchers relied on interviews with 73 officers — most of whom were white — from two unidentified communities that formed the basis of a pair of separate studies of campus police. The urban district was located in the Midwest and the suburban schools were in the South.

Though the officers didn’t comment directly on their schools’ racial demographics, they frequently relied on what the researchers called “racialized tropes” to describe the students in their schools. While some officers claimed to not “see color,” police in the urban district blamed childrens’ upbringing and family dynamics — “a common racialized trope” — for creating schools where they felt educators “were at risk of losing control of the students at any given moment,” according to the report.

Just a few decades ago, a small fraction of public schools in the U.S. had police officers on campuses full time, but their ranks have grown exponentially in recent years in the wake of high-profile, but statistically rare, school shootings. Despite that growth, research has largely failed to articulate benefits of school-based police, while a growing body of work points to a range of negative implications, including disproportionate arrest rates among black children — including for minor offenses.

In the suburban community the study cited, the 2012 mass school shooting in Newtown, Connecticut, motivated officials’ decision to station police at every campus, including elementary schools. In fact, officers were ordered to prioritize preventing school shootings and, in turn, frequently compared their community to places like Newtown.

“They saw their school district was white and wealthy like those students at Sandy Hook, like those students at Columbine,” Fisher said. In the urban district, however, officials’ desire to station officers at schools wasn’t clearly articulated, and mass shootings weren’t as big a priority. “The concerns that the [school police] had by and large were about the students themselves. It wasn’t about protecting these innocent [youth] from dangers that could come from the outside — the students were the danger. Their work seemed to be much more about the policing and the behavior management of the students rather than protecting them.”

In both communities, officers said student aggression, including fights, posed a potential risk, but officials at the suburban schools were most concerned about cyberbullying. At the same time, the officers suggested student misbehavior wasn’t a major problem “because they were from upper- and middle-class families.” In contrast, officers in the urban community described student threats “as a certainty, not a possibility.” As such, officers’ perceptions could “expose students of color to more frequent and intense police interactions,” according to the report.

These differing perceptions of youth, in turn, could contribute to the way students perceive police. According to a new Tulane University survey of students in New Orleans, black students are far less likely to report that police officers make them feel safer. While 69 percent of white students reported feeling safer in the presence of cops, just 40 percent of black students agreed. The gap remained consistent in schools. More than half of students reported feeling safer in the presence of “school security guards,” who may or may not be sworn police officers, including 77 percent of white students and 54 percent of black students.

Speaking to the growing body of research on the negative implications of school policing, Fisher concludes that activists demanding officer-free campuses — rather than simply reforming the current system — are on the right path.

“If we’re relying on a strategy where everything has to be lined up just perfectly for it to work,” he said, “I fear that it’s a system that’s flawed at its core.”