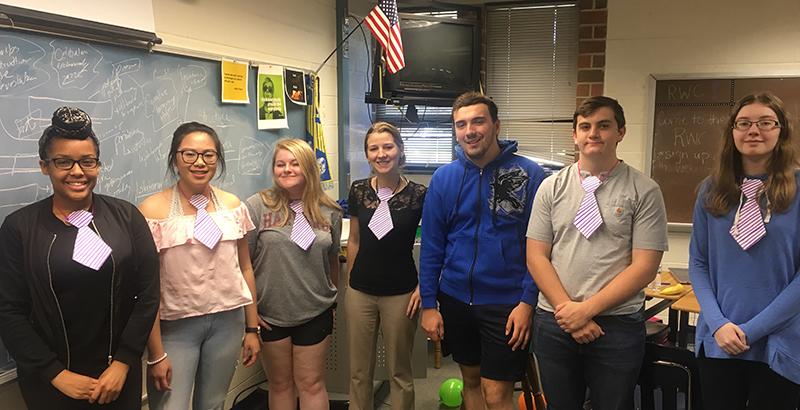 The Senate on Tuesday released a revised version of its tax reform bill which not only restored the teacher tax deduction for classroom supplies but doubled it from $250 to $500, Education Week reported. The GOP tax bill approved by the House Ways and Means Committee last week eliminated the deduction. The two bills will eventually have to be reconciled.

When I was a teacher, I didn’t have a “cute” classroom. My colleague upstairs designed a reading space for students, complete with comfortable seats, a special carpet, and twinkle lights.

I was lucky if my posters stayed on the wall (which often they didn’t because of the school’s erratic temperature changes).

Regardless, most students loved my class as much as they loved my colleague’s. I think they actually developed an affectionate spot for the chaos of the room. Some generously told me that it mirrored the personality of my energetic teaching.

Despite outward appearances, both my colleague and I spent hundreds of our own dollars, as well as a lot of our free time, to make our classes fun and welcoming places where students wanted to go to learn.

My colleague’s expenses were obvious. She created a place where children want to go to read. That’s money well spent.

My expenses weren’t so obvious. You couldn’t tell from looking around my classroom, but it was also money well spent. No amount of colorful paper or pretty lights would have helped me keep a tidy and cute classroom, but I too purchased things to keep my students engaged in learning. These were my hidden costs of teaching.

I stocked my classroom library — a concept strongly encouraged but not funded by our district — with books I thought my students would want to read, like Looking for Alaska and Feed, rather than leftovers from the “one dollar/free” bins.

Even though I taught English, I purchased and put up a beautiful world map when I realized my ninth-grade students didn’t know that Great Britain was an island.

At the beginning of the year, students bonded over naming the classroom fish (Finley), and they took turns feeding him. They did the same when I bought the second fish (Dobby the House Fish) and a better fish tank, after the first one — the fish, not that tank — died.

I created a game for vocabulary practice that used board games and a cowbell. It was as delightfully bizarre as it sounds. It was also effective, though: the students learned their roots and words. They had to do their homework if they wanted to play.

Before winter break, we did a community-building activity involving toothpicks, marshmallows, and paper plates. 145 students participated. It was a competition to design and build igloos. On the daily agenda, I labeled it “spatial reasoning test,” just to mess with the kids before class started.

There was more too, of course. I didn’t regret a penny I spent (well, except for the third fish, Little Sebastian; alas, there’s a time to cut your losses) because I believed that my work mattered, that every creative choice I made had an impact on the lives of students.

The GOP’s tax plan cuts the $250 deduction that teachers were allowed to take to compensate for their personal spending on school and classroom supplies.

For me, the subtext behind this move is equally as upsetting as the monetary loss that comes from eliminating the deduction.

Many teachers actually spend a lot more than $250 on their classrooms, but the deduction embodies a symbol that society values teachers, their ingenuity, and the sacrifices that they make out of their commitment to the kids.

Allowing the GOP to cut this deduction will send a strong message about the value that we, as a nation, place on those who attempt to make a profession out of educating America’s youth.

It’s no secret that teachers make a lot less money than other similarly educated professionals. After all, no one goes into teaching for the money, but, surprisingly, teachers also don’t leave teaching because of the money.

The pay wasn’t the reason I left teaching. I left teaching because I felt that, despite my education and expertise, society didn’t regard the work I did as equal in value to that of other professions requiring similar education levels and skills.

Teachers teach because they love their students and their subject matter. That’s always the silver lining, but, for many people, being a teacher means knowing that policymakers don’t include your voice in their decisions. Parents, school districts, and school boards undermine your authority and take away your autonomy in the classroom. You won’t receive raises based on your merit, and tenure laws not only protect the jobs of your ill-qualified colleagues, but also ensure that they receive larger paychecks.

For a lot of teachers, the GOP’s slight will be just another in a very long list of unacknowledged frustrations. It’s another sign that those who should regard teachers as equals actually don’t respect their profession. Politicians either praise teachers as heroes or use them as scapegoats, but they rarely listen to them or support their professionalism.

We live in a society where school districts increasingly expect teachers to have a master’s degree and simultaneously expect these educated professionals to sacrifice the right to go to the bathroom. It’s not surprising that we have a hard time attracting talented people to the profession.

When I told my students I was leaving teaching, a few started to cry. One student was particularly upset. I tried to comfort her by reminding her that I wouldn’t even be her teacher the next year, but she kept crying and saying: “You don’t understand.”

Maybe she’s right. Maybe we don’t understand. Maybe the only people who truly value and understand the importance of having good teachers are the ones who experience the difference they make on a daily basis. Indeed, they’re the ones that stand to lose the most as the nation continues to struggle to recruit highly qualified people into teaching.

Unfortunately, they have no voice, and the people that do are speaking loud and clear in a familiar tone that reminds me of why I left the profession.