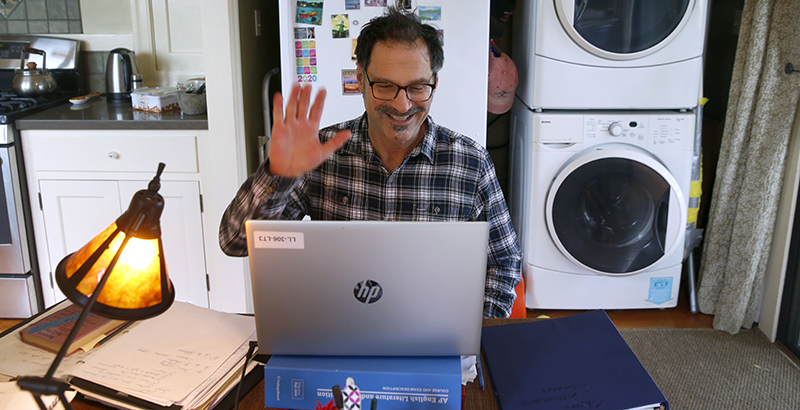 Will Cautero waves to Las Lomas High School students as they log in for an 11th grade English class conducted remotely from his home in Oakland, California on April 16. (Paul Chinn / Getty Images)

With campuses closed nationwide, remote learning has become the norm in communities across the country and the vast majority of teachers are offering instruction online. But few students regularly attend the virtual classes, according to a new survey of public school teachers.

Given COVID-19’s disruption to schools and its potential to cause widespread learning loss among students, teachers unsurprisingly have strong opinions about how the move to online education has worked so far — and what should come next. While most teachers support in-school remediation during the regular school day to address potential learning loss, for example, fewer than 1 in 5 favor a shorter summer break or longer school days.

Across the board, the survey revealed that the closures are having a far more negative impact on historically marginalized students, including children of color and those who live in poverty.

“Teachers predominantly serving students from low-income households are reporting particularly worrisome trends,” Sydney Morris, the group’s co-founder and co-CEO, said in a news release. “Educators’ experiences show that we will need to prioritize vulnerable students as we move forward.”

Addressing students’ “COVID slide,” however, may come with added pressures on teachers — and they’re already worried. Nearly half of teachers said they’re concerned about “unrealistic expectations” surrounding the push to get students back on track once campuses reopen.

The online survey of a nationally representative sample of 600 public school teachers was conducted in early May. It has a margin of error of plus or minus 4 percentage points.

Here are some of the key takeaways:

1 For most teachers, online education has become the sole mode of instruction — but student participation is abysmal. Vulnerable children face a heightened risk of falling behind.

For many students, that downturn in participation has led to a decline in completed coursework. Just 2 percent of teachers said assignment completion rates are “much better than before” the pandemic, while 27 percent said it’s “much worse than before.” Again, assignment completion rates are far lower in schools with the largest shares of low-income students, the survey found.

The low participation and completion isn’t for a lack of trying, however. Nearly three-quarters of teachers said they spend more time reaching out to students and parents than they did before the transition to remote learning. But in order to better support students, about a third of teachers said they wish they had more time to spend on academic instruction and social-emotional support.

For many students, computer access has been a particular challenge. Only a quarter of teachers said that all of their students had access to a computer or a tablet for schoolwork.

Vulnerable children, including those who are homeless or disabled, are at a heightened risk of falling behind, the survey found. Just 21 percent of teachers reported that their schools are able to meet the needs of homeless students “often.” Just over half of teachers said the same about students of color.

2 The switch to remote instruction has also been a learning process for teachers. Most said they weren’t prepared.

Like students, teachers experienced major challenges in the switch to remote education, the survey found. Few reported having experience with distance learning prior to the outbreak. Teachers who work at charter schools, however, were twice as likely to report having a “great deal of experience” with online learning.

Navigating the new environment has been a challenge, but teachers have found one crucial outlet: each other. Nearly two-thirds of teachers said they’ve received “a great deal” of support from their colleagues during the pandemic, while just 27 percent said the same about their district or charter school network.

3 Teachers want added safety precautions in place before they return to their classrooms. But when campuses reopen, they’re most concerned about “unrealistic expectations.”

As lawmakers and school leaders weigh strategies to safely reopen campuses, teachers expect major changes to the school day, the survey found. In order to reopen, more than half of educators said, additional health and sanitation measures, such as regularly disinfecting classrooms and requiring people to wear masks, were their most important considerations. A similar share listed smaller class sizes and staggered schedules as top priorities.

Once students return, teachers advised that schools consider a range of strategies to get them back on track. While 60 percent of teachers said their districts should explore in-school remediation during the regular school day, a similar share supported tutoring and afterschool programs. Just 19 percent of teachers favor a shorter summer break and 16 percent favor longer school days.

Despite the need to combat learning loss, nearly half of teachers say they’re concerned about “unrealistic expectations” in helping students get back on track. In fact, teachers report, those expectations are more worrying than layoffs or physical health issues.