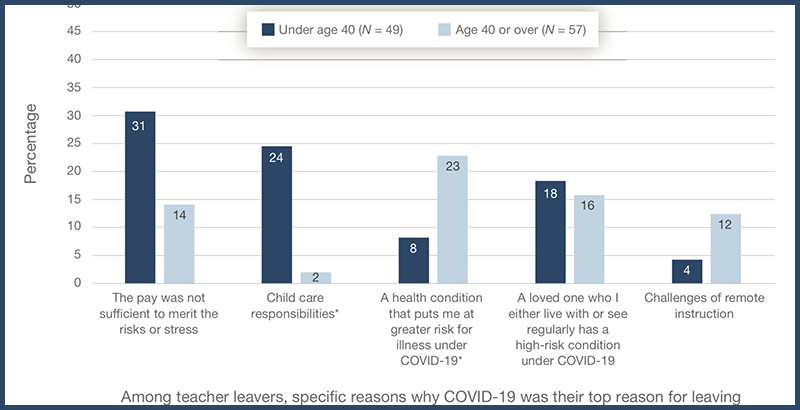 Almost half the teachers who left the field early over the past year blame the pandemic, a new survey shows. But many say they would be willing to return when their schools begin frequent coronavirus testing or when teachers and students have been vaccinated.

Those who stepped away because of COVID-19 cite stress, child care responsibilities and health concerns as their top reasons for leaving, according to data released Monday from the RAND Corp. In fact, teachers were almost twice as likely to blame their departures on stress (43 percent) than inadequate pay (24 percent).

“High stress on the job is a marker of teachers who left the profession, and it’s unlikely to go away once COVID fades,” said Heather Schwartz, a co-author of the study.

Teachers who have left since March reported working longer hours and sleeping less than those who left the profession over a year ago. But Schwartz noted that exhaustion contributed to teachers’ decisions to leave the field before the pandemic, so there wasn’t “much room to grow.”

While the survey sample is relatively small — about 431 pandemic and 527 pre-pandemic teachers responded — the results underscore challenges states face as they rebuild a workforce that was already experiencing shortages before the pandemic, especially in math, science and special education. Michigan, Arizona and Kansas are among states reporting a pandemic-related drop in the workforce. Policymakers are responding by creating incentives to lure back retired teachers, recruiting college students and proposing pay raises to avoid losing more educators. But some former teachers have already moved into new professions where they enjoy more flexible schedules.

RAND researchers didn’t explore the actual number of teachers who have left during the past year. A November survey, however, showed that 27 percent of teachers were considering leaving due to the pandemic.

Technology challenges contributed to some departures, especially among older teachers. They noted frustrations over remote instruction, including inadequate training, lack of high-speed internet and outdated computers. 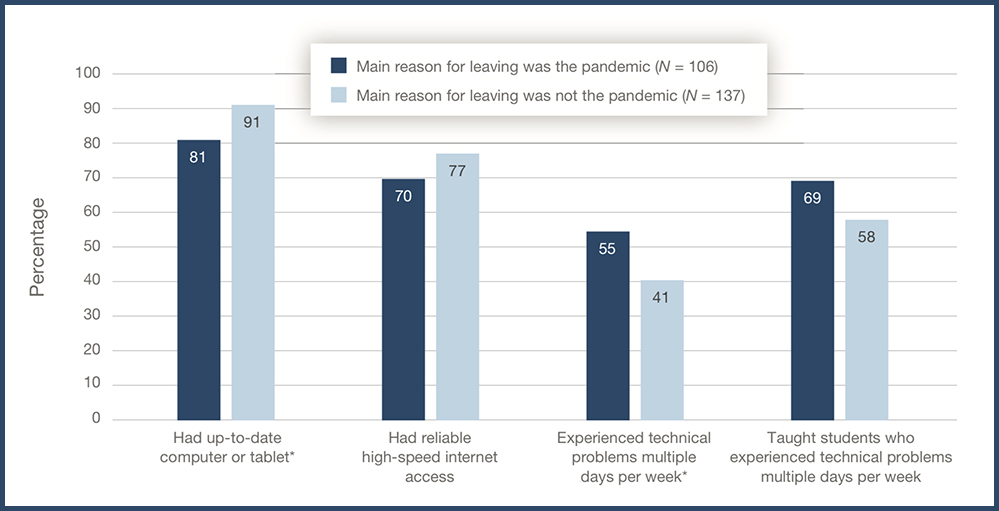 Teachers who left early because of the pandemic cited more problems with teaching remotely. (RAND Corp.)

Teachers in southern states were more likely to leave before retirement than their counterparts in other regions, a trend continued over the past year.

“We already knew there was a big shortage,” said Stephen Pruitt, a former Kentucky education commissioner who now serves as president of the Southern Regional Education Board, a nonprofit focusing on improving education in 16 states. Megan Boren, a program specialist at the organization, added that states are coping by increasing their use of long-term substitutes and allowing teachers to work with emergency certifications.

Pruitt said it’s important to understand what’s causing teachers to leave the field so policymakers can improve working conditions. For now, that means putting a premium on ensuring safe classrooms when teachers return to in-person teaching, he said.

RAND researchers noted a few differences between those who left before and after the pandemic. Black teachers represented a higher proportion of those who left the profession during the pandemic than before — 11 percent compared to 7 percent.

But early-career teachers were less likely to be among those who left since March — 3 percent compared with 6 percent of those who left before the pandemic.

Jeanne Maurand, who taught high school chemistry at a private school in Massachusetts, grew accustomed to teaching on Zoom last year and performing experiments involving acid and base reactions on her dining room table. She had planned on teaching at least five more years.

But when her school initiated a hybrid attendance plan in the fall, the stress of managing cameras, microphones and multiple websites grew overwhelming. She struggled to engage with students on Zoom, including a group dialing in from other countries, while simultaneously managing an in-person classroom where she and students communicated through masks. With windows open for ventilation, the temperature got down to 58 degrees.

“There were so many things you had to be good at,” she said. “It was exhausting, plus, you’re dealing with the mental health issues of the students. Their whole world was turned upside down.”

When a couple teachers at her school got the virus, she was further convinced that “the most important thing is to stay alive.”

Those who left education altogether said they now enjoy more flexibility and higher pay. But about half of those who became teachers in small group pods or microschools said they don’t plan to return this fall, even if they’re earning less.

The survey also found that “more-highly paid teachers are now willing to leave earlier than would otherwise be the case.”

Educators who took positions at private schools or are working as tutors, for example, cited less standardized testing and fewer work hours as additional perks.

The authors noted the findings reveal “persistent structural problems that likely will outlast the pandemic unless there are changes to the teaching profession.” They recommend involving teachers in efforts to reduce stress, building more flexibility into the job, and ramping up COVID-19 testing until everyone is vaccinated.

Pruitt, with the Southern Regional Education Board, said the findings reinforce the notion that job satisfaction rests on more than pay. “I wish people would stop thinking just in terms of salary,” he said.

But Boren noted some positive signs that states will be able to increase salaries as well after several pay-hike proposals died in state legislatures last year. Some states aren’t seeing the budget shortfalls they expected. In the South, five states have recently proposed teacher pay increases and one, Tennessee, passed a 2 percent hike in a special session.

While fewer college students have pursued teaching in recent years, “there’s some evidence that trend may reverse,” Boren said, noting there are teacher preparation programs in the South reporting enrollment growth. That could be the result of the economic downturn, she said. “The teaching profession is viewed as a stable career with some job security.”