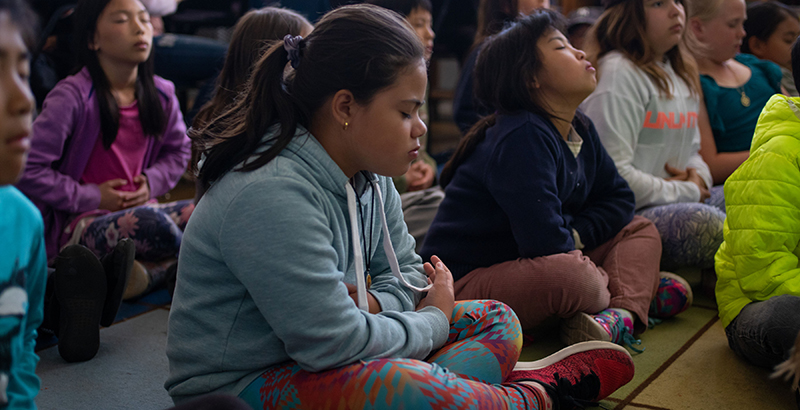 Children around the world will be paying particular attention to their breath on Friday in what may be the largest joint practice of mindfulness in schools.

Called a “Mindful Moment,” students will participate in a meditative exercise at 11 a.m. in their time zone. It will be led by a video lesson from ClassDojo, an education app, that created the lesson in collaboration with the Yale Center for Emotional Intelligence, and partnered with the U.K. charity Beyond Shame Beyond Stigma to promote the global mindfulness day.

Friday also marks the release of ClassDojo’s new series of videos and exercises created with Yale to promote mindfulness in schools, an effort they first started in 2017. The activities, which are aimed at K-8 students, will be rolled out through next week and are free for teachers to access. The mindfulness exercises cover topics like gratitude, focusing on the breath, relaxing the body and helping students manage anxiety.

“It’s really about creating a large movement to get everybody across the world … to just pause and recognize the power of mindfulness,” said Marc Brackett, director of the Yale Center for Emotional Intelligence. “We are well trained at being inattentive.”

The practice of mindfulness has been growing in schools, and while research shows a promising start in helping students pay attention and be more empathetic, there is still more to learn on the lasting benefits. Mindfulness practices can be short and therefore easy for teachers to fit into the school day.

Research on students’ mental health shows that many are stressed and anxious. A recent national survey found that three-quarters of teens reported feeling stressed, while only half said their schools did a good job of teaching them ways to cope with these feelings.

ClassDojo released its own survey of parents and teachers that use its app, which found that about two-thirds said students are better able to handle emotions after practicing mindfulness.

Lynn Bamrick O’Meara, a kindergarten teacher at Beacon Elementary School, outside Detroit, will be leading her students in the Mindful Moment on May 10. O’Meara first started incorporating mindfulness into her kindergartners’ school day 14 years ago, having learned it from her own yoga practice. She uses the mantra “smell the roses and blow out the birthday candles” to help her young students breathe deeply.

“We have many kids with challenges, and mindfulness really works,” O’Meara said. “We’re really trying to get them to own what they can have control over because there’s so much they don’t have control over, but how they choose to react is something they can control.”

There’s Lots of Social-Emotional Support for Students, but Not for Teachers. Here Are Some Programs Looking to Change That

Mindfulness is part of the larger umbrella of social-emotional learning that is also gaining traction in schools. Many educators are realizing that helping students practice skills like self-regulation, compassion and getting along with others is helpful to learning academic material. Social-emotional learning is supported by a growing field of research that indicates that teaching these skills can improve graduation rates, academic performance and mental health into adulthood.

The Beyond Shame Beyond Stigma charity, which is helping promote the Mindful Moment, is headed by Jonny Benjamin, who is advocating for better mental health support for children in the U.K. Children in U.K. schools can participate in raising money for the charity as part of the Mindful Moment.

Benjamin himself was diagnosed with schizoaffective disorder, and he credits a stranger for saving his life when he was considering jumping from London’s Waterloo Bridge 11 years ago. Since then, he’s launched mental health programs for schools, spoken on suicide prevention and written a book about his experience, with a foreword by Prince William.

“I can honestly say that mindfulness has been life-changing for me, and I only wish I had been taught it when I was young,” Benjamin said in an email to The 74. “I really believe it would have made all the difference to my mental well-being.”

ClassDojo doesn’t know how many schools will participate, but it hopes the Mindful Moment will reach thousands of children in the 180 countries that use its platform. The organization said that 15 million children have watched its mindfulness videos from 2017.

13 Best Education Articles From the Month