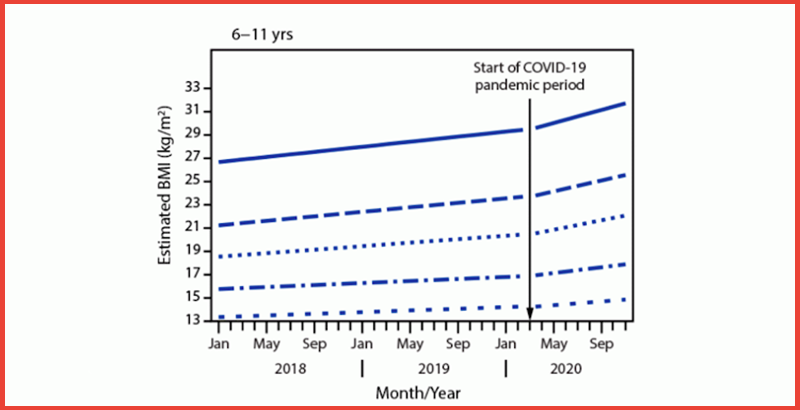 Since COVID-19 first shuttered schools last spring, American children have been subjected to a kind of natural experiment in inactivity. The last 18 months have seen three school years interrupted sporadically by closures, quarantines, and virtual instruction, during which time children have spent more time in front of screens than ever before. And the physical effects are now becoming clear.

According to a paper circulated last week by the Centers for Disease Control and Prevention, body mass index (a common measure of weight relative to height) in a sample of 430,000 children increased between March and November 2020 at nearly double the rate that it did before the pandemic began. The changes were especially prevalent among elementary-aged children, as well as those who were already overweight or obese. 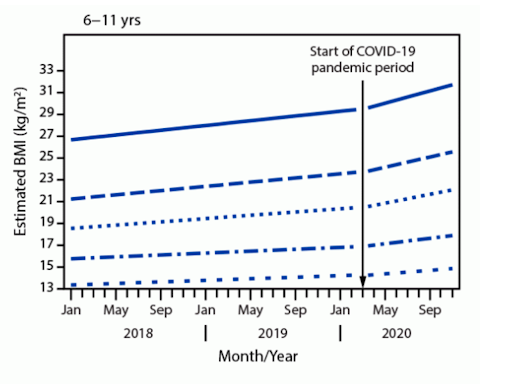 “It’s never been this bad,” she added. “So the research is definitely accurate.”

The CDC’s findings echo those of other research released in the past few months. A study published last month by the Journal of the American Medical Association (JAMA) showed that rates of overweight and obesity have soared among children measured in California between the ages of 5 and 17. Two others — one published in The Lancet and another appearing in the journal Pediatrics — found that the weight gain was greater for certain demographic subgroups, including Hispanic, African American, publicly insured, and low-income children.

The spate of publications suggests a national spike in pediatric weight gain as kids have been restricted in their movements outside the home.

Corinna Koebnick, a nutrition scientist at Kaiser Permanente Southern California and a co-author of the JAMA paper, wrote in an email that it was “safe to say” that children have gained weight during the pandemic, and that it was unclear whether opening schools to in-person learning will be enough to reverse the trends that have taken hold.

“The increase in obesity over the 11 months [we] analyzed compares to the increase seen in national data over almost the last two decades,” Koebnick said. “Children who have social and financial disadvantages, who live in school districts with less money or…less access to parks and meal programs may have additional challenges returning to healthy weights.”

Koebnick’s study used Kaiser Permanente electronic health records for over 190,000 children whose body-mass index (BMI) was measured during a medical visit both before and during the pandemic. Researchers divided patients into three age groups (those between the ages of 5 and 11, 12 and 15, and 16 and 17) and studied their tendency to be overweight (at or above the 85th percentile of BMI for age) or obese (at or above the 95th percentile.)

Children in all three age groups gained more weight during the pandemic than they did before. But elementary-aged kids saw the biggest relative gains, with an average increase of BMI of 1.57, compared with an increase of 0.91 for the next-youngest group and 0.48 for the oldest. Adjusted for height and translated into actual weight, those figures indicate average gains of 5.07 pounds, 5.09 pounds, and 2.27 pounds for the respective groups.

Demeule-Hayes, said that the wave of research on pandemic-related weight gain reflected the reality she and her colleagues face every day. Some patients referred to her, none older than 17, weigh as much as 400 pounds, and it has become typical to treat children diagnosed with what are typically seen as adult ailments, such as hypertension, high cholesterol, diabetes, and osteoarthritis.

Several papers presented earlier this summer already showcased the rising prevalence of type-2 diabetes. In both Washington, D.C., and Baton Rouge, Louisiana, researchers discovered that pediatric diagnoses of the dangerous and chronic condition approximately doubled in the year after school closures began. Among children diagnosed during that period, one study found that 60 percent required hospitalization for complications like severe hyperglycemia, compared with just 36 percent in the year before COVID emerged.

“There are a whole lot of sleep disturbances with these kids because they’re tired, they’re not getting good-quality REM sleep,” Demeule-Hayes said. “So they’re coming home and taking naps, which just perpetuates that sleep-disturbance cycle — they can’t get to sleep later because they’ve taken a three-hour nap after school.”

Experts are still investigating how the coronavirus changed the lifestyles of both children and adults. Consumer figures have shown that sales of packaged and processed foods shot up in the early months of the pandemic, and survey evidence from Europe suggests that consumption of fresh foods declined. Demeule-Hayes pointed to the monthslong stillness that followed school closures, during which she watched her own young children learn from inside the house.

“Having them be on a computer literally all day, not having any of the recess or the steps outside or even just walking up and down the halls — they’ve been so, so sedentary,” she lamented. “Pre-pandemic, even if they were getting driven to school, they were still at least walking around the school and walking up one or two flights of stairs to classrooms.

According to tech firm SuperAwesome, the time children spent on screens each day went up by as much as 50 percent after COVID-related closures began; 40 percent of kids aged 3-9 said they spent “much more” time on screens. Respondents to a 2020 survey of Canadian youth reported lower levels of physical activity, less time spent outside, more sedentary behaviors, and more sleep than before the pandemic.

As school districts around the country reopened for full-time, in-person learning, educators have welcomed back students whose lives were meaningfully — and perhaps permanently — altered by COVID. The extent of the academic damage is thought to be extensive, and hospital records suggest that many children may have suffered prolonged abuse while separated from their schools. On top of those severe setbacks, the bodily changes that some have undergone may prove long-lasting: Obese children and adolescents are vastly more likely to be obese as adults.

Koebnick recommended that parents limit screen time and encourage their kids to exercise and drink lots of water. Demeule-Hayes said that she recognized that some parents might still be leery of outdoor play given the dangers of the Delta variant. Still, she said, there was much that families and educators could do to combat further weight gain.

“As much as teachers and administrators can work [movement] into school time, they should. For parents, it’s taking walks as a family, after dinner, whenever you can work it in. Our message is always to make changes as a family so there’s not a stigma around a child’s ‘weight issue’; it’s really about making healthy changes for the family.”