Telecommunications goliath Sprint has begun a national expansion of its 1Million Project, a campaign to provide internet access and electronic devices to disadvantaged high schoolers. Through its philanthropic arm, the Sprint Foundation, the company hopes to reach a million students by 2021.

Announced last year, the project initially developed as a pilot in 10 major cities and high schools across the country, including Providence, Rhode Island, and Paterson, New Jersey. Thousands of low-income students have already been given hotspots to provide broadband access at home, as well as a smartphone or tablet. Each device comes equipped with 3 gigabytes of data, as well as unlimited 2G connectivity.

To coincide with the beginning of the 2017–18 school year, the initiative is now being rolled out in 118 school districts across the country. Some 300 pupils at New Jersey’s New Brunswick High School were connected in September, along with around 500 in Richmond County, Georgia, earlier this month.

The 1Million Project aims to close the so-called homework gap, the huge number of American families with school-age children that lack high-speed internet at home. According to the Pew Research Center, the number of unconnected households could number as many as 5 million out of 29 million nationwide. Those families are disproportionately under-resourced, representing about one-third of all families with incomes under $50,000 and children between the ages of 6 and 17.

By contrast, home internet use is almost universal among the more affluent. Of Americans with six-figure incomes, at least 94 percent use a smartphone, a laptop, or home broadband, and 74 percent use a tablet. Some 66 percent have access to all those digital assets, while just 17 percent of Americans with incomes under $30,000 can say the same.

According to a 2015 report from the Council of Economic Advisers, home internet use is much sparser among older Americans of all incomes. But a 90-year-old from the highest income bracket is much more likely to use the internet than a 15-year-old from the lowest. 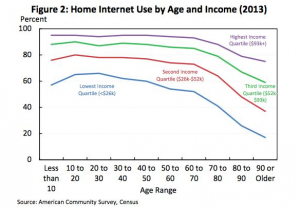 That’s particularly troubling when academic work is increasingly being assigned and completed on the internet. A 2009 report from the Federal Communications Commission’s Broadband Task Force revealed that over two-thirds of teachers give homework that requires internet access to complete. Libraries and after-school programs can step into the breach, but the vast majority of students do homework … well, at home. Many students are left asking to borrow a classmate’s computer or device just to keep up.

“It’s stressful and embarrassing to keep asking my friend,” one student told The New York Times. “I don’t want to keep bothering her. But I also don’t want my teachers to think I’m making excuses.”