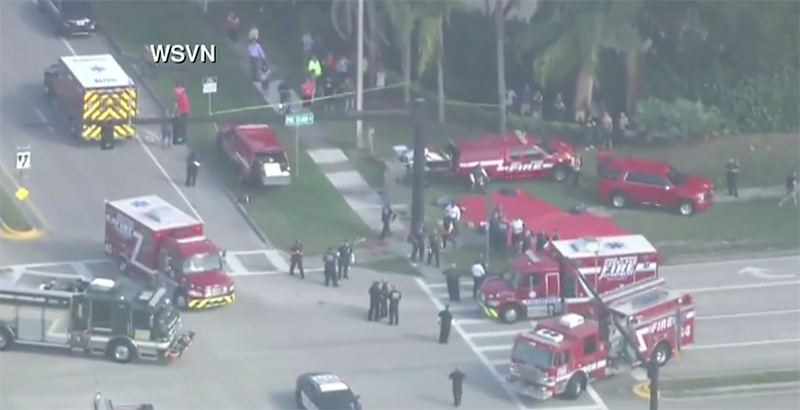 People are brought out of the Marjory Stoneman Douglas High School after a shooting at the school that reportedly killed and injured multiple people on February 14, 2018 in Parkland, Florida. Numerous law enforcement officials continue to investigate the scene. (Photo by Joe Raedle/Getty Images)

This report will no longer be updated. It was last refreshed at 10:30 p.m. EST; follow us on Twitter @the74 for the latest updates on the incident.

Officials report that at least 17 people have died and more than a dozen have been injured following a Wednesday afternoon shooting at a South Florida high school. Photos and videos shared on social media in the minutes and hours after the attack captured scenes of heroic rescue efforts, chaotic evacuations, and confusion as students streamed out of school, parents rushed to reunite with their children, and law enforcement officials descended on the scene, fighting to get the situation under control.

Some of the sights and sounds from the day:

The shooting happened at Marjory Stoneman Douglas High School, in Parkland, Florida, which is about an hour northwest of Fort Lauderdale. The school is part of Broward County Public Schools.

• The shooting took place at a high school in Parkland, Florida
• Multiple people have reportedly been injured
• Authorities said the shooter remained at large https://t.co/RJHGRmYuj9 pic.twitter.com/xFcbSYJfT0

BREAKING: Authorities are responding to reports of a shooting at a high school in Parkland, Florida. This is a developing story. https://t.co/0KpCmq0gMe pic.twitter.com/VQxuZ0iOdq

And students evacuating under police protection:

Students at Stoneman Douglas High School in Parkland, Florida flee amid reports of a shooting at the school. https://t.co/O0pXTKDQ3y pic.twitter.com/s53xK8mcBp

Students at Stoneman Douglas High School in Parkland, Florida flee amid reports of a shooting at the school. “The school immediately went on lockdown but is now dismissing students,” Broward School District says. https://t.co/BuEAqGjCN1 pic.twitter.com/TWqjnIVT87

As those students ran out, a SWAT team ran in.

A harrowing livestream captured the moments students fled their school, hands over their heads:

BREAKING: Aerials over the scene in Parkland, Florida where there are reports of possible school shooting. https://t.co/4UhSrwOtEh

One parent called CBS to share what he heard from his daughter, who was inside the school at the time of the shooting:

MORE: "She said she heard gunfire," father of student in Parkland, Florida, high school tells CBS News. "She said the window blew. She said she screamed and ran into the closet with her friends." https://t.co/1Y5NBGZMdE pic.twitter.com/uAQ7qLPaAi

One teacher spoke to CNN about hiding in the closet with her students during the incident.

Teacher who escaped the shooting said they had training on this kind of situation just weeks ago. https://t.co/4Oam3zlAnD

Other parents waited anxiously for word from their children.

Mr. Furatta pictured here can only stand and wait as he looks upon the sea of police and emergency vehicles. Somewhere outside the high school is his daughter. #ParklandShooting pic.twitter.com/z8hSsQQfac

At least 14 were transported to area hospitals, Broward Sheriff Scott Israel said during a press conference.

Florida Sen. Bill Nelson says there is "a number of fatalities" in Parkland, FL shooting pic.twitter.com/Uek6eKPY9B

Israel described the incident as “catastrophic.”

Police are giving us an update: "It’s just catastrophic" https://t.co/Cl1X3SvANn

"It shows us that a tragedy can happen anywhere at anytime." pic.twitter.com/UPn7rtjQfO

Authorities said the suspect, who was identified as a former student at the school, was taken into custody without incident.

Sen. Chris Murphy of Connecticut, an outspoken advocate for stricter gun regulation, spoke about the incident on the Senate floor. “If you turn on your television right now, you’re going to see scenes of children running for their lives.” He said the United States is seeing an “epidemic of mass slaughter” that doesn’t happen anywhere else in the world.

Senator @ChrisMurphyCT speaks on the floor about Parkland shooting: "We are responsible for a level of mass atrocity that happens in this country with zero parallel anywhere else."pic.twitter.com/0U1Y4NfHfS

MORE: "There are fatalities that are involved," Broward County Public Schools Superintendent Robert Runcie says of Parkland, Florida shooting. "We can't confirm the number at this point." https://t.co/1Y5NBGZMdE pic.twitter.com/QWdjdP0tNc

My prayers and condolences to the families of the victims of the terrible Florida shooting. No child, teacher or anyone else should ever feel unsafe in an American school.

As helicopters hovered overhead, families reunited. A family reunion site was set up at a nearby hotel, according to WSVN.

The 74 has been tracking every incident of gun violence on school property in 2018. (You can see our recap of all the incidents thus far here.) To get the latest school safety news delivered straight to your inbox, sign up for The 74 Newsletter.