Seen and Heard: Thousands of Pro-Charter School Parents Turn Out to Rally Ahead of Controversial Moratorium Vote at L.A. Board Meeting 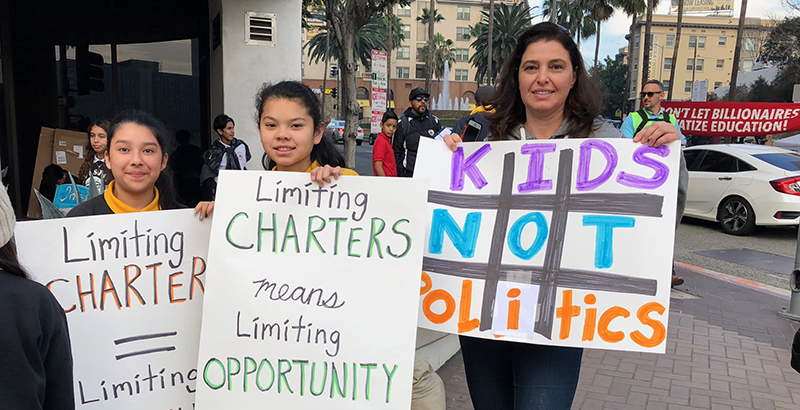 Thousands of parents and supporters turned out to show their support for charter schools ahead of Tuesday’s Los Angeles Unified School board meeting Tuesday. Hours before the meeting was set to begin, parents arrived to rally, urging board members to vote against a resolution calling for a moratorium on new charter schools and asking the state to study their impact on L.A. district schools.

Charter school students are arriving at the rally outside @LAschools. School bands are playing while families chant, “My child my choice.” pic.twitter.com/OxMmuIt65P

As many as 4,000 parents cheered and chanted at the district headquarters, according to an estimate from the California Charter Schools Association, which organized the demonstration. They held signs declaring “Kids Not Politics” and “School Choice Now.” L.A. Unified School District police estimated the crowd at 3,500 people, according to an officer at the boardroom entrance.

We're estimating 4,000!!! That's how many parents, students, teachers and charter leaders are outside LAUSD headquarters right now to speak out against the charter ban! Join them: https://t.co/C85xqTCWVI #NoCharterBan #KidsNotPolitics #StandForAllStudents pic.twitter.com/Hw36zpYeZv

The anti-charter rhetoric and backdoor negotiations put kids in the middle. They deserve more from us. We can and must do better. Let’s march together in Sacramento for more funding, let’s advocate together for a parcel tax. But first, we must vote #NOCharterBan. #KidsNotPolitics pic.twitter.com/UbRnzDnOmf

As The 74 reported, the resolution was a part of L.A. Unified and United Teachers Los Angeles’s agreement to end the six-day teacher strike in district schools last week but was not included in the contract. If passed, it would direct the superintendent to pursue a moratorium on new charter schools in the district, and it also would require the school board to call on state officials to study the financial impact of charters on the district to inform revisions to the state’s charter law. Four of the six board members — the majority of whom were elected with charter organization backing — would have to approve it for it to go into effect.

As the L.A. School Board Votes on a Resolution That Would Call for a Freeze on New Charter Schools, Inside the Debate — and Backlash — That’s Roiling America’s Second Biggest District

The rally included a series of speakers, including teachers, students, and parents who talked about their personal experience with charter schools in the district.

Throughout the rally, supporters chanted “My child, my choice” and “Let us learn.”

Los Angeles families are speaking out against a divisive and harmful LAUSD charter ban that would limit their ability to choose a school that works best for their kids. #NoCharterBan #KidsNotPolitics #StandForAllStudents pic.twitter.com/7TNhFcpvt8

Shaquinta Bevans is happy she chose a charter school for her daughter. Her daughter struggles with dyslexia and was able to flourish with a small nurturing environment. #NoCharterCap @Monica4LAUSD @Kelly4LASchools pic.twitter.com/HnkXrrsToZ

This @EdnovateSchools dad says “Churros YES” and “Charters YES”. We hope the LAUSD board agrees and does the right thing for ALL students today. #KidsNOTPolitics #NOcharterBan pic.twitter.com/eT9keJgyoX

Board members Mónica García and Nick Melvoin spoke to the crowd before going in to the meeting, with García saying she wanted to see and hear the parents who “in the past 15 to 20 years … have shown up to help L.A. Unified serve all students well.” Melvoin told the crowd he was with them and that the resolution “only continues the cynicism of the politics of the past. It does nothing to help out kids.”

"I came outside because I wanted to see you and hear you,” @Monica4LAUSD tells #charterschools rally. “Because in the past 15 to 20 years, you have shown up to help L.A. Unified serve all students well. … I appreciate when families in L.A. demand choice.” pic.twitter.com/oxJJRRaxSr

“This resolution only continues the cynicism of the politics of the past. It does nothing to help out kids. … You know what my vote will be, I'm with you! Thanks for what you do for our kids and our district.” @nickmelvoin @LASchools pic.twitter.com/hIEOGxrbho