America’s skyrocketing rate of high school graduation is one of the biggest puzzles in education policy.

Cheery headlines have announced the news in recent years: Some 85 percent of American students completed high school with a diploma in 2017, up from just 79 percent in 2011. Education commentators, none more prominent than President Barack Obama, lauded the trend as proof of the success of his policies. And it is difficult to argue with millions more young people passing a critical milestone on the way to successful adulthood.

But a chorus of doubters has emerged as well, warning that schools and districts may have lowered their standards in order to award diplomas to students unprepared for college or employment. Some singled out the vogue for “credit recovery” programs that allow pupils to quickly — many would say too hastily — make up for courses they failed earlier. Others pointed to the disconcertingly long list of schools and districts that have resorted to administrative legerdemain and outright cheating to inflate their graduation statistics.

All of which has led researchers to ask whether the climbing rates of high school completion were simply a form of observer effect. Perhaps the introduction of high-stakes accountability, a product of the 2001 No Child Left Behind law, was distorting the actions of teachers, principals and superintendents, who responded by simply waving along kids who should have been retained. If the threat of closure or loss of funding hung over educators, it was reasoned, they were incentivized to graduate their students by any means necessary.

A new study from the Brookings Institution finds some truth in that theory — but also some rather encouraging news. According to its findings, soaring graduation rates are indeed the result of federal accountability mandates, but they can’t be explained away by fraud or slackened expectations. Common manipulations to artificially boost high school completion don’t fully explain the positive trend around the country; instead, the watchful eye of bureaucrats seems to have catalyzed real growth in student knowledge and skills.

Study author Doug Harris, an economics professor at Tulane University and the director of the Education Research Alliance for New Orleans, said he was “surprised” by the discovery, which flies in the face of gloomy news accounts and expert skepticism.

“Going into it, we were motivated by those scandals and anecdotes we were hearing about in Louisiana,” he said in an interview. “I was thinking, ‘This is not going to be good.’ But the more we dug into it, the more it actually seemed like pretty good news. And I think that it’s big news.”

To identify the importance of federal policy, Harris and his co-authors studied the movement of high school graduation rates following the implementation of No Child Left Behind.

Under the law, states were required to set graduation targets for districts to hit, or else face administrative penalties. Using information from the Common Core of Data, the researchers calculated the average freshman graduation rates of every American school district, and compared data from the pre-NCLB years 1999 and 2000 with the post-NCLB years of 2009 and 2010.

As expected, they found that high school graduation increased the most in districts that fell beneath the accountability thresholds set by their states, as well as in states with more districts under those thresholds. Meanwhile, districts already hitting their state benchmarks made the least progress. That indicates that districts and schools were responding directly to the mandates set out in federal policy.

The evidence suggests, therefore, that accountability directly led to progress in getting kids to graduate. But was that progress honestly achieved? To answer that question, the authors looked at various forms of “strategic behavior” — i.e., measures taken to satisfy state requirements that don’t actually improve student learning.

One obvious obstacle to statistical inflation is the presence of high school graduation exams, which are used in more than a dozen states. Since passing the test is a baseline requirement for students to collect a diploma, educators in those states can’t simply massage poor grades or fudge attendance figures. If those types of practices were largely responsible for the uptick in graduation, then the trend would be muted in the presence of exams.

But the study finds that the opposite happened: Graduation rates actually increased more in states with graduation exams.

Next, the team looked at the impact of credit-recovery courses, which have come under considerable scrutiny as easy ways for students to gain credit toward graduation despite failing a given class — often by passing online tests that are vulnerable to cheating. Focusing on Louisiana, the researchers found that in schools threatened with accountability sanctions, students were between four and five percentage points more likely to take at least one credit recovery course. This was especially true in math, for which subject-specific graduation requirements were tightened in the state at the same time graduation accountability was implemented.

Statistically, however, this phenomenon was much too small to explain Louisiana’s sizable spike in its high school graduation rate. That jump, from 64 percent in the 2005-06 school year to 81 percent in 2017-18, can’t be accounted for by the kind of “strategic behavior” the researchers were looking for.

Aside from schools’ overall improvement in moving high schoolers toward the finish line, another positive recent development is the significant narrowing of the credential gap between black and white students. In the past 40 years, the “status completion rate” of blacks between 18 and 24 (a measure that includes high school graduation as well as GED attainment) has caught up with that of their white peers, according to a January report from the Institute of Education Sciences. 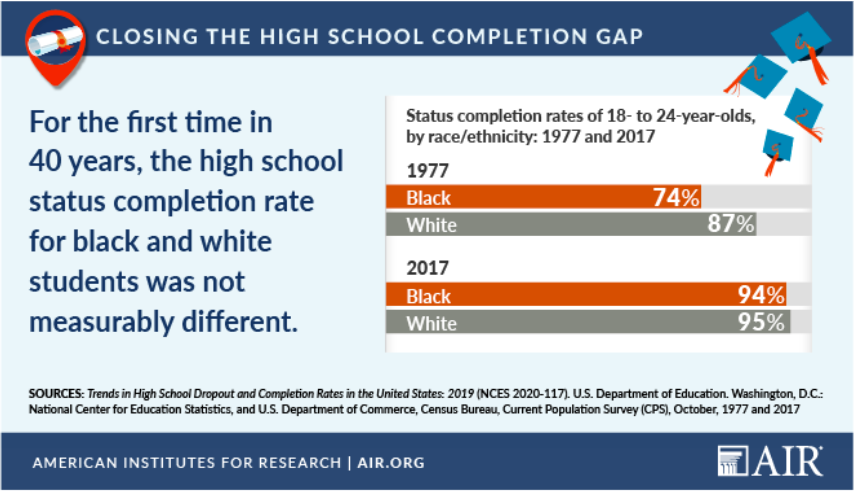 The Brookings study does not disaggregate by student racial groups, but Harris said it was logical to conclude that black students, who are more likely to attend underperforming schools, would derive the most advantage from policies aimed at those schools.

“The districts that were below the threshold were almost certainly disproportionately attended by students of color, so those are the students who benefited more from the policy.”

Harris acknowledged the limits of the research, principally the variations in state accountability practices and the availability of credit recovery, which he said is particularly common in Louisiana. But he said the findings were evidence of the effectiveness of NCLB and its successor legislation, offering “probably the best news for federal accountability policy, ever.”

“All signs point in the right direction: that graduation accountability was a substantial cause of the increase, and that the ways in which the increases have happened [reflect] an increase in real knowledge and skill. It’s nice to see.”