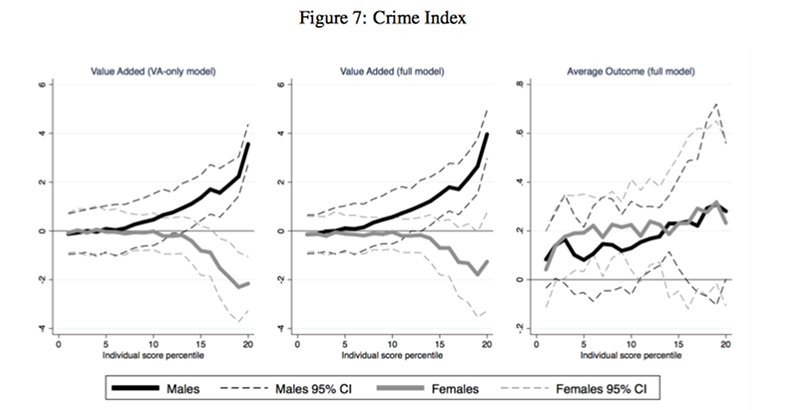 With the nationwide expansion of both charter schools and voucher-style tuition subsidy programs, growing numbers of families are selecting from an array of places to enroll their children in school. The question is, how do they make up their minds?

Many in the education reform movement no doubt wish that those choices were entirely based on academics — particularly how well schools performed in lifting student scores on standardized tests. But recent studies have indicated that many parents care more about whether a given school is close to their house, offers extracurriculars like football or marching band, or features an extended school day.

Now, recently published research provides further evidence that parents often look past test scores when choosing schools for their kids. Co-authored by Northwestern University professor C. Kirabo Jackson and international economist Diether Beuermann, the study finds that parents of different kinds of children favor schools that excel in different areas. And that might be wise, given the authors’ other finding: Schools that improve test scores may not be doing much to improve other life outcomes, such as teen pregnancy or employment.

The study employs school information from the Caribbean nation of Trinidad and Tobago, where children enroll in secondary education (grades 6-10) after completing the Secondary Entrance Assessment (SEA) and submitting four ranked choices for possible schools. Following the British model of secondary schooling, pupils take an additional low-stakes test in eighth grade, as well as a high-stakes exam that determines completion of the 10th grade. Higher-performing students take another high-stakes test around age 18, which qualifies participants for enrollment in college.

Jackson and Beuermann examine data from more than 320,000 students between 1995 and 2012, collecting test scores as well as families’ initial ranked preferences for schools. They also track data for teen pregnancy, arrests, high school dropouts, and employment (via mandatory contributions to the country’s social security system). In doing so, they aim to discover how extensively test performance in Trinidad’s 152 public secondary schools is associated with those important life outcomes.

The answer, they found, was not much. A school’s success in lifting student scores on high-stakes examinations is only very lightly correlated with reductions in incidence of teen pregnancy. They found no correlation between testing improvements and encounters with the criminal justice system, and a small negative correlation between testing improvements and employment.

“Generally, the patterns suggests that school output is multidimensional such that … schools that improve academic skills are not necessarily those that improve broader adult well-being,” the authors write.

That’s not to say that exam performance is meaningless, either to families or Trinidadian society at large. Passing those tests is a prerequisite for a range of benefits, including employment within the public sector and eligibility for university scholarship programs. And judging from the rankings they submit when applying for secondary schools, many families generally exhibit “strong preferences” for schools that raise scores: The average parent is willing to drive twice as far to drop their child off at a school in the 85th percentile of testing improvement rather than a school in the 15th percentile, the applications show.

But those averages hide significant variation among different groups. Perhaps paradoxically, among the parents of kids who placed in the bottom half of SEA scores, there was no pattern of favoring schools that lifted scores on subsequent exams. It’s high-performing students who are ushered into those schools, Jackson and Beuermann find.

“In contrast, parents of high-achieving children value school effectiveness a lot,” they write. “For those in the top decile of incoming test scores, parents … would be willing to travel more than four times as far to attend a secondary school.” In this case, four times the median school distance would be roughly half the width of Trinidad.

The greater the specificity of families being studied, the more the data reveal about their tendencies. Parents of high-achieving girls — who would obviously stand to lose the most if their schooling were sidetracked — show a willingness to triple their commute time to enroll their daughters in schools where teen pregnancy is comparatively rare. Parents of top-scoring boys are happy to select schools that increase their daily travel time by a staggering 1,000 percent.

Parents, and especially parents of top students, are therefore capable of discerning between school benefits that extend well beyond test scores. That shows the potential of school choice to improve students’ lives, the authors conclude.

“These results suggest that parents may be using reasonable measures of school quality when making investment decisions for their children — which is a key requirement for the potential benefits of school choice. The fact that parents do not only prefer schools that improve academics but also those that improve non-academic and longer-run outcomes suggests that the benefits to school choice may extend to a wide range of outcomes.”

Best of the Month

The 14 Best Education Articles From May