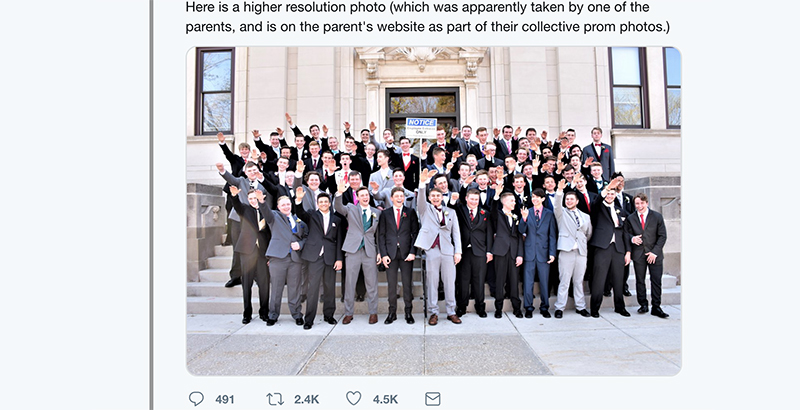 Two hours northwest of Milwaukee, Wisconsin, is the close-knit community of Baraboo, home to roughly 12,000 residents and a school district serving 4,000 kids across five elementary schools, one middle school, and one high school.

It’s an outlier town perhaps best known for the Circus World Museum, which draws tourists and families from across the country every summer.

But over the past 12 hours, city officials and school district leaders have been racing to respond to an online controversy now surrounding the Baraboo School District, its current senior class, and what appears to be a photo of more than 60 boys giving a Nazi salute last spring, around the time of the junior prom.

If anybody from Baraboo High School in Wisconsin can clue me in on why it appears the entire male class of 2018 is throwing up a Sig Heil during their prom photos – that would be great.

It was a 1 a.m. tweet from journalist Jules Suzdaltsev, a frequent contributor to Vice, that went viral over the late-night hours, earning tens of thousands of shares on social media and morning headlines across Wisconsin’s top news outlets.

Suzdaltsev tweeted that he was quickly flooded with reactions, comments, and anecdotes from other alleged Baraboo students and alumni who said they wanted to share their own experiences with district bullying and hate speech and what they encountered when they attempted to report these incidents to school authorities.

I am being flooded with messages from students of this school about some of the guys in the group photo.

It sounds like there is a lot of racist bullying and the school tends to do nothing about it. pic.twitter.com/yvPZWI196A

City officials are now weighing in, and the district says that although the photo did not occur on school property or during a school function, administrators are investigating the image and considering what actions to pursue:

The Baraboo School District sent the following letter to parents this morning in response to a photo circulating on social media. We are launching an investigation, and as such, are unable to provide additional details at this time. pic.twitter.com/oRxcl82lJT

The Baraboo Police Department is aware of a controversial photo of a group of high school students that has been posted to social media. Officers are assisting the Baraboo School District with their investigation into this matter.

The photo of students posted to #BarabooProud is not reflective of the educational values and beliefs of the School District of Baraboo. The District will pursue any and all available and appropriate actions, including legal, to address.

The photo of students posted to #BarabooProud is not reflective of the educational values and beliefs of the School District of Baraboo. We are investigating and will pursue any and all available and appropriate actions, including legal, to address.

The Auschwitz Memorial tweeted that the photo is why the organization works hard “to explain what is the danger of hateful ideology rising.”

It is so hard to find words…

This is why every single day we work hard to educate. We need to explain what is the danger of hateful ideology rising. Auschwitz with its gas chambers was at the very end of the long process of normalizing and accommodating hatred. https://t.co/13AzZaMGJR

School officials told the Baraboo News Republic that the high school was “placed in a ‘soft hold’ Monday due to the photo,” which “prevents students from leaving school premises — such as for off-campus lunch — unless they have permission from a parent and approval through the office.”

Some online commenters have pointed to past controversies at the district as evidence of a toxic school culture. As the News Republic reported back in 2012, many residents were outraged by the use of Confederate battle flags in a student-led memorial for a friend who had died in a car crash.

Go Deeper: 14 things to know about confronting bullying in schools … get the latest bullying news and research delivered straight to your inbox by signing up for The 74 Newsletter.