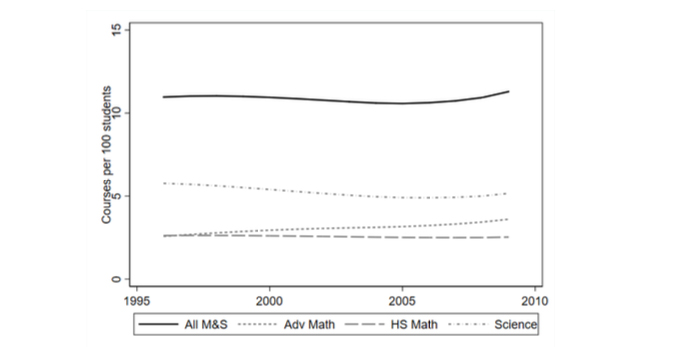 Expanding access to science, technology, engineering, and math (STEM) courses in high school doesn’t increase the number of students who attain college degrees in those subjects, a new study finds. Neither will adding more STEM classes at the high school level push black, Hispanic, and female students to become STEM majors at the same rate as the white and Asian men who currently predominate in those college disciplines. In fact, the authors add, it may only worsen existing gender and race disparities.

Their conclusions throw cold water on recent campaigns to broaden the STEM talent pipeline in American schools. Persistently low rankings on international math assessments and chronic shortages of qualified instructors have fueled warnings of a STEM education crisis. Policymakers often perceive economic growth as dependent on breakthroughs in science and technology, and the Obama White House prioritized the expansion and diversification of the future science and technology workforce through its “STEM for All” campaign.

The administration made both financial and symbolic gestures to emphasize the campaign’s importance; while securing $1 billion in new private funding for STEM education, the president also created the White House Science Fair. In his 2011 State of the Union address, the president set a goal of training 100,000 new elementary and secondary math and science teachers within a decade.

Since students who declare a STEM major or graduate with a STEM degree generally enrolled in more STEM courses as teenagers, some have suggested that offering more of those courses in high schools could attract more students and prepare them to succeed in the subjects at the post-secondary level. In schools with high percentages of low-income or minority students, it is hoped that expanding STEM course access could yield pathways for underrepresented students to lucrative careers. 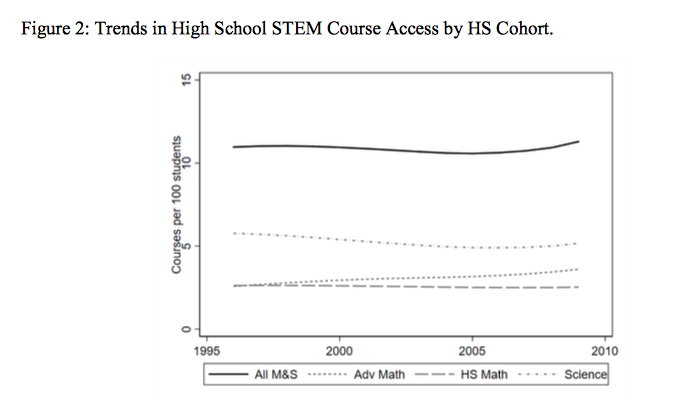 Overall, students who attended high schools with broader STEM offerings were hardly more likely to major (or attain a college degree) in a STEM subject than those whose high schools offered fewer such courses. The authors estimate that offering one more STEM course per 100 students would increase college STEM enrollment and degree attainment by between .03 and .04 percentage points.

What’s more, increasing access to STEM classes for female and minority students in high school doesn’t help them catch up to white and Asian men later on. It could even make those groups fall further behind.

“The estimates suggest that post-secondary STEM outcomes for female and underrepresented minority students are less affected by access to STEM courses in high school than white male students,” they write. “The implication is that broad, untargeted efforts to expand STEM access in high school may modestly exacerbate current race- and gender-based imbalances in STEM fields.”

Darolia and Koedel conclude by suggesting that improving the pool of STEM teachers, instructional methods, or curricular materials might be better paths to improvement than simply expanding access to existing resources. But it’s also possible that the academic inclination toward math, science, and technology is simply activated earlier in children’s schooling.

In a highly publicized study from late 2017, renowned economist Raj Chetty demonstrated that children who later go on to become inventors were typically already performing well on third-grade math tests. They were also much more likely to come from high-income families, especially when one of their parents was also a patent holder. 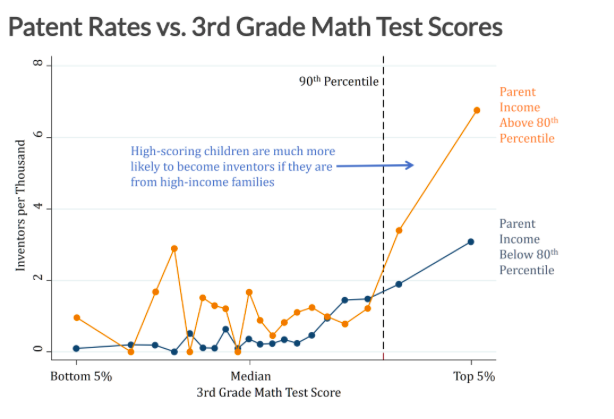 If childhood exposure to technological innovation is the most important factor in later-life technical success, offering more STEM classes to high schoolers simply might not make much difference.