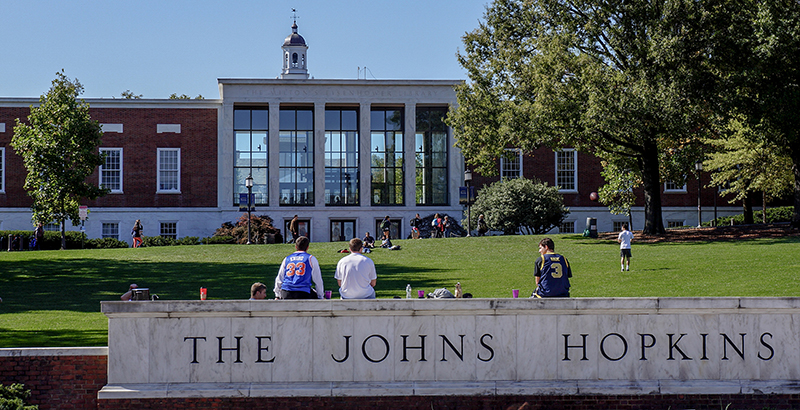 As the toll of mass school shootings confounds the nation, the response has focused largely on heightened school security, from metal detectors to armed teachers. But a more comprehensive approach is crucial, Johns Hopkins University officials argued as the institution announced on Monday the creation of a new center focused on student safety and health.

The Center for Safe and Healthy Schools brings together researchers from across disciplines at the Baltimore-based institution to tackle student well-being with a holistic approach — reaching far beyond high-profile but low-probability mass school shootings. Through research and education, the center aims to incorporate a range of issues — like youth suicide, trauma and bullying — into a broader conversation about how to foster safe and healthy school climates.

Though the new center is housed within the School of Education, it includes faculty from public health, engineering and medicine. The comprehensive approach is crucial, School of Education Dean Christopher Morphew said, because a hyper-focus on school shootings and campus security is inadequate. Through the collaboration, university officials will explore issues including students’ physical and mental health, their relationships with school staff and neighborhood safety.

“It’s certainly not clear that our response to these mass tragedies has done anything to make schools comprehensively safer places,” Morphew said. Part of the center’s work will explore the efficacy of school security technology and its effects on students. “We need to better understand what things like active-shooter training, for example, [are] doing to our kids’ psyches about schools and school environments.”

Despite the heightened attention on the topic following the 2018 mass shooting at a high school in Parkland, Florida, federal education data suggest schools have become markedly safer in recent years. In fact, Johns Hopkins researchers are approaching the new center with that reality in mind.

Sheldon Greenberg, professor of management in the School of Education, said he’s witnessed parent fear of school shootings firsthand. During a recent conference on youth violence, a mother said her 6-year-old daughter came home from school after practicing an active-shooter drill and said, “Mommy, if I die, I want you to know that I still love you.” It’s this perception, he said, that the center needs to work to overcome.

“We’re telling them that their schools are dangerous places,” he said. “It’s not just implied, we’re saying it directly, when in fact schools are very safe places. About the safest place you can be on any given day in this country is in a school.”

Greenberg and other Johns Hopkins researchers have already done significant work exploring the school security industry. In a 2016 report, researchers explored the wide range of school security products on the market and found a dearth of research on their ability to prevent student misbehavior or violence. Without an “honest broker” to test the efficacy of specific products, the report noted, school leaders may rely on vendor-sponsored research or word of mouth. Fear of violence, the Johns Hopkins report noted, plays a key role when districts implement new security measures.

“Research is great, but if it’s not getting to the hands of practitioners and making a difference in the classrooms and in the areas around schools, it’s problematic,” he said. Under the current security push, he said, educators are stripping from students the sense of schools as sanctuaries. “We’re imposing on young children fear of being in school, and we don’t know what the effect is going to be as they grow up. We can’t wait five or 10 years to address these things.”

Between 1993 and 2016, fewer than 3 percent of youth homicides, and fewer than 1 percent of youth suicides, occurred in schools, according to a recent National Center for Education Statistics report. The perception of student safety post-Parkland, however, tells a different story. After the 2018 mass shooting at Marjory Stoneman Douglas High School, one poll found that about a third of parents feared for their child’s physical safety at school, a significant jump from the 12 percent who said the same in 2013. Another recent survey found that about three-quarters of parents with school-age children believe schools are less safe today than they were two decades ago.

Beyond safety within a school’s walls, the center’s work will also track the role that the communities and neighborhoods surrounding schools play in keeping campuses safe. Morphew pointed to a Johns Hopkins study published in February, which found that students who commute to class through high-crime Baltimore neighborhoods are more likely to miss school. And previous research has found that exposure to violent crime hinders students’ test scores and graduation rates.

These out-of-school stressors that children bring into classrooms should also be considered when exploring students’ perceptions of safety, said Amy Shelton, associate dean for research in the School of Education. Rather than focusing exclusively on efforts to prevent threats from entering school campuses, she said, the center will focus on factors within “an environment that fosters that kind of student.”

“We can externally say a school looks safe, but if a child is not perceiving it as safe, or a parent is not perceiving it as safe, that’s almost the same from a learning perspective as it not being safe,” Shelton said. With a background in cognitive psychology and neuroscience, Shelton has focused her research on the academic potential of children from high-poverty communities. “Ultimately, what we want is learning success in these spaces, and the safe school itself is kind of the first step in bringing you there.”

In the current environment, Morphew said, school leaders must make a range of safety decisions without the evidence to adequately understand sound strategies. That’s why a push to better train educators and school leaders will be a key component of the new center’s work, he said. Under the initiative, core courses in the School of Education will focus on strategies to create safer schools.

“When I talk to principals, they tell me that they’re being asked to make decisions about the best security devices or how to spend money or make decisions about staffing or how to evaluate and use” school-based police, Morphew said, yet schools of education haven’t trained future school leaders about how to confront such challenges. “We want to solve that problem.”

How Much Learning Time Are Students Getting?

Reopenings Driven By Politics, Not Science