New Data: NYC Is the U.S. Coronavirus Epicenter, With Thousands of Confirmed Cases. But the School Districts in These 12 Counties Have Been Harder Hit 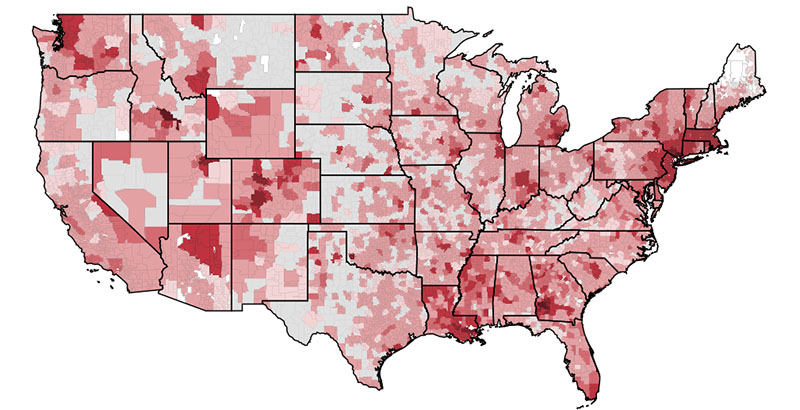 With more than 76,800 confirmed coronavirus cases in New York City and more than 4,000 virus-related deaths as of Tuesday, America’s most populous city is considered the pandemic’s national epicenter.

But while the virus has prompted widespread disruptions in the country’s largest school district, other districts have been harder hit on a per capita basis.

In fact, 12 counties — home to 197 school districts — now have more cases per 100,000 residents than New York City. Through this lens, the 3,800-student school district in Blaine County, Idaho, has been more affected by the pandemic than any other public education system, according to a new data tool by EdBuild, a nonprofit think tank that focuses on school finance.

In Blaine County, home to an estimated 22,500 residents in 2018, officials have confirmed 428 cases of the virus and four deaths as of Tuesday, affecting roughly 2 percent of the population. The surge in cases there has been attributed to area ski resorts that attract out-of-town visitors. Despite the area’s high infection rate, some state officials have offered a defiant response to the global threat, encouraging residents to push back against the governor’s stay-at-home order.

On Monday, the Idaho State Board of Education voted to close school campuses through the end of the school year, though districts have adopted remote instruction. Previous state plans sought to reopen schools by April 20 — weeks or even months earlier than nearly every other state.

To reach its findings, EdBuild researchers merged federal data on school district demographics with a tally of confirmed coronavirus cases and deaths from The New York Times. The tool, which EdBuild researchers plan to update several times a week as the virus spreads nationally, includes data on school district funding, poverty rates and student racial demographics. That context could help policymakers and advocates “understand where communities are already at a disadvantage, where communities are already likely to struggle with a shock,” said Zahava Stadler, EdBuild’s policy director.

The other regions with higher incidence rates than New York City — where the number sits at 931 cases per 100,000 people — include counties in Georgia, Louisiana and suburban New York.

Counties with higher incidence rates than New York City include:

The prevalence of cases in these states can be attributed to a number of factors. In the New York City area, researchers have tied cases primarily to travelers from Europe. In the New Orleans area, scientists say the prevalence of underlying medical conditions and high poverty may have contributed to the region’s outbreak. In rural Georgia, several funerals have been blamed for helping spread the virus.

EdBuild released the tool — and an accompanying data set — to help education officials and advocates explore how the pandemic’s spread could affect schools in their vicinities, Stadler said. As local economies falter, she said, districts should brace for major disruptions in school funding. School districts in areas with high poverty rates that rely more heavily on state funding could be most affected, she said.

“State revenues are going to just plummet in this crisis because income taxes and sales taxes are going to disappear,” she said, which will disproportionately affect lower-income communities. “They’re the ones that are going to struggle the most with the fallout.”