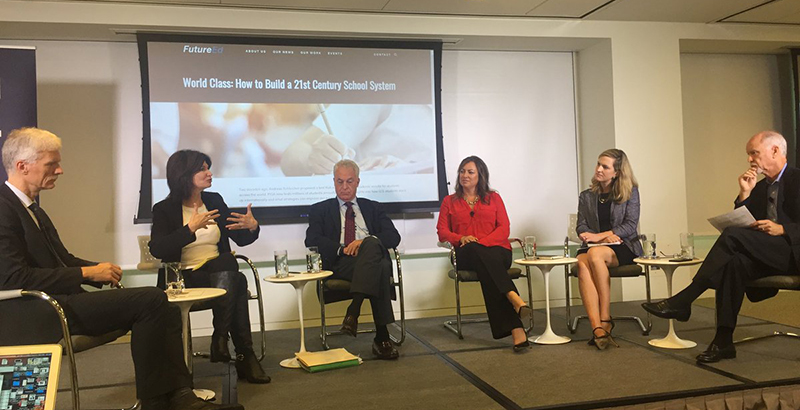 Though poverty often predetermines educational outcomes in the United States, that isn’t so in other industrialized countries — and the United States could learn a lot from its peers as it develops a school system for the 21st century, the director of education and skills at the Organization for Economic Co-operation and Development said Tuesday.

“Poverty is not destiny,” in other countries, Andreas Schleicher told a group of education reform advocates and the president of the nation’s largest teachers union at a Georgetown University forum.

Schleicher is best known for developing the international PISA test, a reading, math, and science exam given every three years to 15-year-olds in developed nations. He recently released a book on building a 21st century school system.

In the United States in 2016, about 32 percent of students were considered “resilient” — that is, they were in the bottom quarter of all PISA countries’ “economic, social, and cultural status” but performed in the top quarter of all students on exams. That’s a little above the OECD average of 30 percent, but far behind places like the Chinese provinces of Macau and Hong Kong, where the number surpasses 60 percent, and Japan and Estonia, where it approaches 50 percent, according to Schleicher’s book. 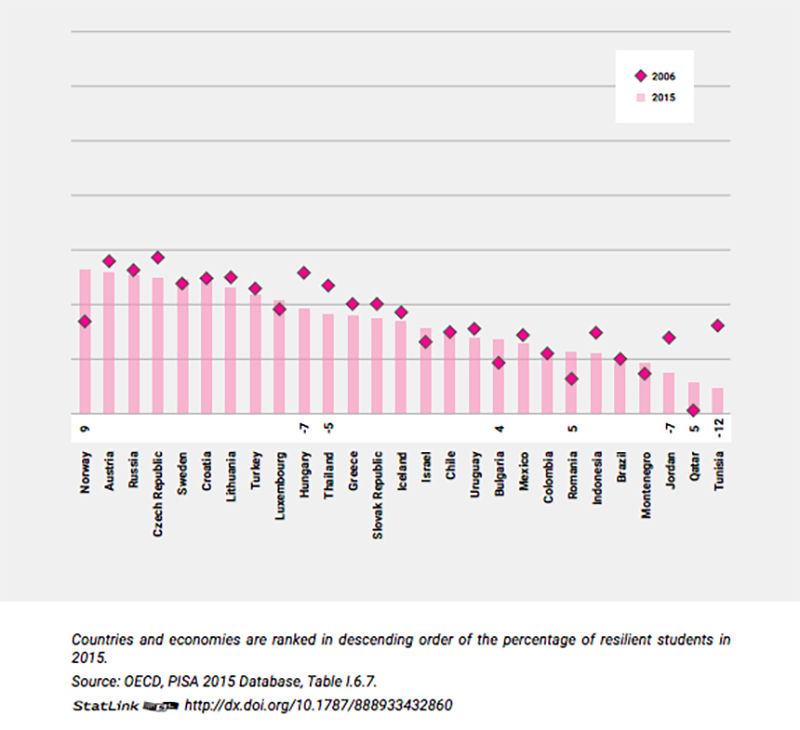 American students ranked 18th in science, 15th in reading, and 35th in math among the 60 industrialized nations whose students took the 2015 PISA exam, the most recent.

The panelists at the gathering, sponsored by Future Ed, a think tank associated with Georgetown, debated Schleicher’s argument before a few dozen people. They touched on centralization versus local autonomy, standardized testing, and private school choice, among other topics where reform advocates and traditional public school supporters are often at odds.

Schleicher said the most successful school systems have strong shared notions of standards and outcomes, with more local autonomy, concepts that are not mutually exclusive, he said.

“I think local autonomy, without a shared notion of what good learning outcomes is about, is not going to get you very far,” he said.

Lily Eskelsen García, president of the National Education Association, said local autonomy was revoked during the No Child Left Behind era. The Every Student Succeeds Act, the K-12 federal education law that replaced NCLB, largely shifts power and decision-making back to states and school districts.

Although shared goals are admirable, they shouldn’t all hinge on one standardized test, Eskelsen García said.

The other panelists, who have led school systems and advocated for more reforms, said that while past versions of tests were subpar and invited memorization rather than real teaching, tests are still needed.

“We are not there with testing. Our version of testing is the best of what we have right now. It could certainly be a lot better,” said Claire Voorhees, national director of policy at the Foundation for Excellence in Education, the group founded by former Florida governor Jeb Bush.

“I kind of shudder at a world where we don’t have that, or where our federal government isn’t requiring that,” she added.

Tests should be low-stakes for educators and high-stakes for students — the opposite of what they are in the United States, Schleicher said.

“The moment you make the stakes for educators high, you end up trading in validity gains for efficiency gains,” he added.

The most intense debate surrounded the role of school choice.

Schleicher said many of the most successful countries have a system with more built-in choices. The Netherlands, for instance, functions as primarily a choice system, and most of the schools in Hong Kong started through philanthropy, not government, he said.

What is “toxic,” he said, is too much deregulation. “When you put the responsibility on parents to make good choices, it rarely works,” he said.

Voorhees, whose group advocates for private school choice, worried that too much regulation in American choice programs could alienate top schools.

“What I worry about is overreaching … Our balance has to be really different, or you’re going to drive out those high-performing players,” she said.

Voorhees pointed to Louisiana, where private schools participating in a voucher program must give students state exams and are kicked out of the program if students don’t do well.

“Why are we not focused on making sure all students have a great, high-performing public school, with programs and services that other parents demand and get in their neighborhood?” she said.

The education reformers on the panel said that like shared goals with local autonomy, improving all public schools while offering more choices for parents who currently don’t have them can co-exist.

Chris Cerf, most recently the superintendent in Newark, said equalized school funding, as exists in New Jersey, where he was also the state education commissioner, is not enough to fight affluent parents’ proclivity to buy homes in the best districts they can afford while racist housing rules of decades past cluster many people of color in underperforming schools.

“Giving parents some significant say that their economic circumstances did not afford them in what is best for their child, is a value that has driven improvements systemwide in many places,” he said.

Most Teachers Don’t Get Enough Coaching

Meet the Etsy of Education