Key Takeaway From International Educator Survey: At a Time of Growing Protests, U.S. Teachers Say They Feel Satisfied but Undervalued 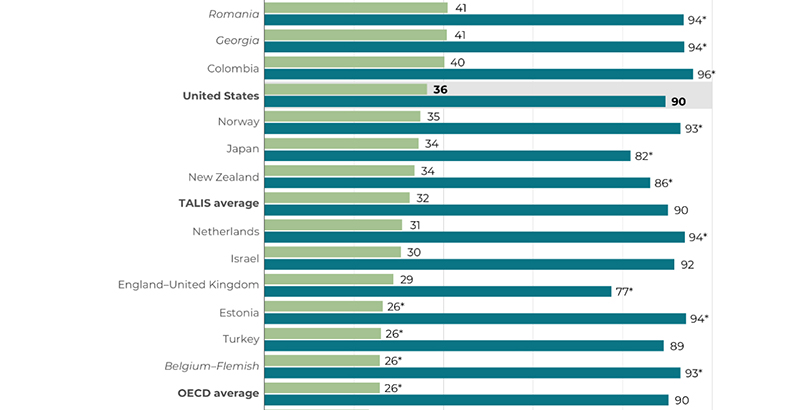 (Organisation for Economic Co-operation and Development)

Teachers in the United States work long hours and feel undervalued by the public — but like their jobs anyway.

Those findings, from an international education survey released Wednesday, offer fodder for all sides of a debate about teacher pay and working conditions that is mobilizing teachers to protest across the country.

The Teaching and Learning International Survey, coordinated by the Paris-based Organisation for Economic Co-operation and Development, surveyed teachers and their principals in 49 industrialized countries, including U.S. teachers and principals involved in grades 7-9. Educators were quizzed on a host of issues, including their backgrounds, professional development and attitudes toward the profession.

Here are five key findings from the report:

U.S. educators also hewed close to the international average on the question of whether they believe society valued their profession. But the results varied widely between the countries: 92 percent of teachers in Vietnam reported feeling valued, compared with 5 percent in the Slovak Republic.

Results from the survey don’t speak directly to the recent rise in teacher activism, said Peggy Carr, associate commissioner of assessment at the National Center for Education Statistics, which administered the survey in the U.S. But she said the findings do provide some insight.

“Teachers love their jobs all across the globe,” she said, but they also feel undervalued. “There’s a message there, I think, that we need to think about.”

Organisation for Economic Co-operation and Development

While the surge of recent teacher protests centered largely on education funding and salaries, the international survey didn’t touch on those issues directly. But another finding, Carr said, could play a role in educator unrest:

Educators in Chile also reported teaching an average of 28 hours per week, while those in Kazakhstan reported teaching only an average 15 hours a week. But classroom instruction is only one part of teachers’ jobs. When factoring in other duties, like grading and planning, teachers in Japan boasted the longest workweeks, lasting 56 hours on average.

The same held true for principals. In the U.S., 99 percent of participating principals reported they hold a master’s degree or higher, significantly greater than the international average of 61 percent. While principals in the U.S. and across the surveyed countries have nine years of leadership experience on average, American principals tend to have less of a background in teaching: 12 years, versus 20 years among their global counterparts.

4 A Global Gender Divide Between Teachers and Principals

In the U.S. and elsewhere, women make up the majority of the teaching workforce. The opposite is true for principals.

Among surveyed teachers in the U.S., 66 percent are female, compared with 69 percent across participating countries. Meanwhile, men comprise just over half of principals in the U.S. and internationally.

5 Teachers in the U.S. Report Little Need for Professional Development