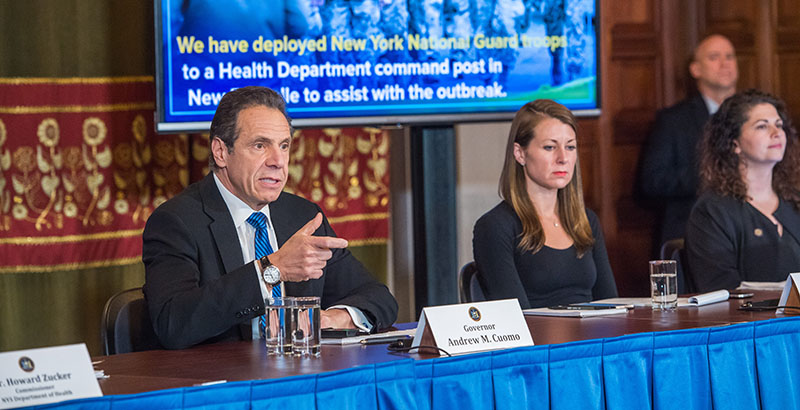 Gov. Andrew Cuomo delivers a briefing on coronavirus including new cases around the state (Darren McGee/Flickr)

New York Gov. Andrew Cuomo on Tuesday ordered school closures in a New York City suburb that’s considered the epicenter of the coronavirus outbreak in the state. The one-mile “containment area,” where public places such as schools and churches are required to close for two weeks, includes parts of New Rochelle and neighboring Eastchester.

“New Rochelle, at this point, is probably the largest cluster in the United States,” Cuomo said at a press conference Tuesday. While he called the one-mile zone “fairly constrained,” he said the move is “literally a matter of life and death.”

The news comes a day after Cuomo and the New Rochelle schools superintendent offered competing messages on school closures in the city. On Monday, Cuomo called New Rochelle “a significant hotspot” for the virus and suggested the schools had closed. But the schools remained open Tuesday, and Superintendent Laura Feijóo resisted calls to shut them down. The schools would remain open, she said in a letter to parents Monday, “unless and until we receive written directive to close.” Feijóo told reporters that she opposed closures because they’d be a hardship for families, especially those with low-income children who rely on schools for free meals.

During a press conference Tuesday evening, Feijóo defended her decision not to close all schools in the district but rather to close schools “only when we absolutely have to.”

“We think kids should be in school. We really think the safest place for them both educationally and safety-wise is in school,” she said.

The spat over whether to close New Rochelle schools cuts to the heart of a dilemma school districts across the country face amid fear over the spread of COVID-19, the name of the disease caused by the virus. Though education leaders have come under pressure to close schools as a precautionary measure, doing so complicates other school functions, such as providing food for low-income children.

As of Tuesday, 621 schools have closed or are planning to halt classes temporarily, according to Education Week. Those closures affect more than 430,000 students.

The number of confirmed coronavirus cases across the U.S. surpassed 800 Tuesday. At least 27 people who tested positive for the virus have died. On Tuesday, a 69-year-old New Jersey man who worked in Westchester County at Yonkers Raceway, near New Rochelle, became the first person in the Northeast to die from the virus.

In New York, a total of 173 people have tested positive for the virus, 108 of whom are in Westchester County, where New Rochelle is located.

In New York City, officials said the country’s largest public school system will remain open unless a student or educator tests positive for coronavirus. At that point, schools would close for 24 hours while officials assess the situation. But an online petition calling on lawmakers to close city schools has received more than 100,000 signatures.

In New Rochelle, district officials have “advocated for help from the Governor’s Office to aid in supporting students who are food dependent,” Feijóo said in a note to parents Tuesday, adding that the district “cannot handle this alone.” She said the district needs the state to commit to food delivery for students who need the support.

“We believe students are safest in schools and are eager to reopen as soon as possible,” Feijóo continued. “It is inevitable that one of our students or staff will contract the virus. What is in our control is to be ready, calm, decisive and responsive to any and all circumstances which may arise.”

As new cases are reported, decisions on school closures are being left to state and local officials. But the federal government has attempted to alleviate concerns over school lunches for low-income children. Over the weekend, the Department of Agriculture relaxed school lunch rules so low-income children can access school meals amid closures.

Local public health officials recommend that the schools remain open “as long as the district can maintain appropriate supervision and adequate services,” according to a statement on the Lake Washington website. However, the district has taken several proactive steps: Activities including field trips, concerts and athletic events have been canceled or postponed through March 18.

On the national level, some public health experts are calling on school leaders to close campuses immediately, arguing that a proactive approach could save lives. Among them is Howard Markel, director of the Center for the History of Medicine at the University of Michigan, whose research includes a study on U.S. cities’ response to the 1918 influenza pandemic. That pandemic, considered the most deadly outbreak in human history, killed roughly 40 million people globally and more than 500,000 in the U.S.

School closures “turned out to be one of the most effective firewalls against the spread of the pandemic,” Markel wrote in The New York Times.

Though the coronavirus mortality rate remains unclear, officials shouldn’t “wait until it’s too late,” he wrote. In a separate study, on the 2009 H1N1 influenza epidemic, Markel found that most school closures in Michigan occurred too late and were therefore ineffective.

“Schools are community gathering places where large numbers of people are in proximity to one another and respiratory infections can easily spread among young people and adults alike,” he wrote. “Shutting them down can be a key part of slowing the spread of easily transmissible viruses so that hospitals are not overrun with sick people.”

Meanwhile, other research points to the potential drawbacks of temporary school closures, including an economic toll should parents be forced to stay home from work to care for their children. Additionally, if students miss extended periods of school, campus closures could carry negative consequences for academic performance.

Research also backs up an argument by Feijóo, the New Rochelle superintendent. Even with school closures, she said, it’s likely that children will mingle — potentially hindering the benefits of school closures. Even though more than 700 schools in the U.S. halted classes in 2009 to limit the H1N1 outbreak, a survey of Pennsylvania residents found that 69 percent of students visited at least one other public location, such as shopping malls or restaurants, while classes were halted.

“While students are home please remember not to congregate unnecessarily,” Feijóo said in a message to parents on Tuesday. “Keep safe and have students work on educational materials provided to you.”

Correction: Previous versions of this article incorrectly stated that the one-mile containment zone covers most of suburban New Rochelle.