In Arkansas, 82% of Special Education Students Graduate on Time; in Mississippi, 31% Do 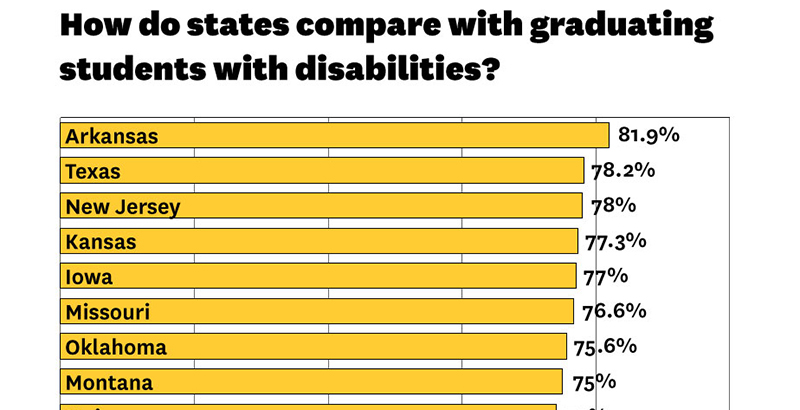 The high school graduation rate for American students with disabilities lags 19 percentage points behind the overall rate, according to an analysis from The Hechinger Report. On-time graduation rates for students who are classified as special education in certain states are beneath 50 percent, and the disparity between the highest-performing states for disabled students and the lowest-performing is enormous.

Multi-year data from the Department of Education shows a 64.6 percent on-time graduation rate for special education high schoolers, who experience learning challenges ranging from deafness to dyslexia to autism to bipolar disorder. That figure is notably lower than the 83.2 percent on-time rate for all public school students. Among states, Arkansas graduates the highest proportion of its students with disabilities — 81.9 percent — while just across its eastern border, Mississippi graduates only 30.7 percent.

Last-place Nevada, even while boasting a 71.3 percent graduation rate for all students, moves only 29 percent of its special education students across the finish line. Although Mississippi improves slightly on Nevada’s performance for classified students, its higher overall rate (75.4 percent) means that it can also claim the largest gap of any state: nearly 45 percentage points.

Writers for The Hechinger Report point to familiar explanations for the states’ dismal results: a shortage of qualified staff, lack of funding for programs, and the walls of bureaucratic obstruction erected by districts determined not to divert resources to special education.

“We tend to see the same districts over and over again,” one Arkansas special education lawyer told the authors. “I still think that they’re lazy in general and they will continue to try to play the odds that they won’t get sued.”

Certain states have become notorious for abuses in both practice and reporting. As the Houston Chronicle detailed in a blockbuster report last year, officials in Texas — the state with the second-highest disabled graduation rate, just behind Arkansas — enforced a secretive and arbitrary cap for a decade on the number of students in each school allowed special education services. Alabama isn’t even shown on Hechinger Report’s list because state officials admitted to artificially boosting its overall graduation rate just last year.

Several other states have experienced eye-popping jumps in special education graduation rates over recent years. Alaska increased from 42 percent to 57 percent between 2014 and 2015; Georgia moved from 36.5 percent to 54.3 percent; and Kentucky rose from 52 percent in 2013 to 70 percent in 2014.

Improvements of that magnitude tend to raise eyebrows, particularly when they occur so quickly.

One positive development that has met with less cynicism is the proliferation of postsecondary programs that specifically cater to adults with learning disabilities. The number of “work readiness” college programs located on college campuses has grown tenfold from 2004 to 2017.

Folded into respected institutions like Syracuse and the University of Massachusetts, the programs specifically aim to include adults with significant developmental delays by offering academic courses alongside training in life skills like résumé-writing.