Schools mold their students in ways so numerous and varied that some remain almost entirely ambiguous. Experts have long studied how teachers impart knowledge and prepare young adults for the workforce, and a flood of more recent research has examined the value of developing patience, persistence, and other social and emotional skills. But the informal relationships that school staff form with kids, one of the most familiar conduits through which they receive life guidance and prepare for adulthood, are comparatively obscure.

New research being released today aims to change that by focusing explicitly on the effects of in-school mentoring. The study, circulated as a working paper through Brown University’s Annenberg Institute for School Reform, finds that high school students with mentors tend to earn better grades, stay in school longer, and make more money than peers who are otherwise similar to them. Unfortunately, the lower-income students who seem to benefit the most from mentoring at school are also the least likely to receive it.

The paper builds on existing research that has detected significant benefits from providing mentors to kids. But that work has usually looked at structured and well-known programs like Big Brothers Big Sisters, which draws together adults and children who are both expressly looking to establish connections. Matthew Kraft, an economics professor at Brown and one of the study’s authors, said that the webs of “natural mentoring” in school environments represent a much more common phenomenon that needs to be investigated in its own right.

“Natural mentoring — when students and adults in school buildings develop relationships that go beyond the formal role of the teacher in the classroom or a coach on the athletic field — happens far more frequently than the ways in which we offer formal mentoring,” Kraft said. “So we need to understand the degree to which that matters for kids, where it’s happening, and where it’s not happening.”

Commentary: Mentoring Can Be a Powerful Force in Kids’ Lives. Here Are 3 Ways Mentorships Benefit Students — and 3 Benefits for Teachers

But Kraft and his co-authors, University of Virginia psychologist Noelle Hurd and Anneberg research analyst Alex Bolves, faced a problem. Natural mentoring is, if not random, organic and difficult to replicate: You can’t design a research trial that will offer identical doses of care and attention to kids in schools and then compare them with a control group.

To help overcome those issues, the team turned to a huge data set, the National Longitudinal Study of Adolescent to Adult Health. Commonly called “Add Health,” the project was launched in the 1994-95 academic year to track a nationally representative sample of over 20,000 middle- and high-schoolers as they aged into early adulthood. Waves of in-home interviews with participants have revealed countless details of their home and social lives over nearly three decades, including their relationships with adults. All told, over 15 percent identified a teacher, coach, or school counselor as an important mentor, with 80 percent of those saying that their mentorship persisted past high school.

Determining the effects of all that mentoring required the researchers to use a variety of statistical methods. They studied the academic records of students from before and after they connected with their mentor; examined similar pairs of adolescents including 1,213 twins and triplets, 1,378 students who named one another as best friends, and 548 students who engaged in romantic relationships with one another; and they controlled for a host of demographic factors including race, gender, disability and immigration status, family structure and household income.

In the end, the data pointed to a clear, wide-ranging set of benefits resulting from mentorship. Students with mentors gained between .06 and .48 points of grade point average, were between 18 and 35 percent less likely to fail a course, and were 10 to 25 percentage points more likely to attend college. Turning to workplace outcomes, the authors estimate that mentorship may boost the annual earnings of students by between $1,780 and $5,337. Those effects compare favorably to some of the most effective education interventions that have been studied, including high-quality pre-K and lower class sizes.

Kraft cautioned that these associations between in-school mentoring and improved short- and long-term circumstances should not be regarded as clear causal evidence. But they offered the “most robust empirical evidence to date” of the importance of school-based mentoring, he said — and they fall in line with existing evidence, both from formal mentoring programs and the lived experience of many people.

“None of our methods are gold standard, and we can’t definitively say without a doubt that natural mentoring causes the outcomes we observe to improve,” Kraft said. “However, we are able to leverage multiple approaches to account for the biases we think might be present. And across all the approaches, we can’t make what appear to be the benefits of natural mentoring go away.”

‘Size of these effects is amazing’

Class was also a noteworthy factor: Over 17 percent of students from more affluent families reported the existence of an in-school mentor, compared with just 12.5 percent of students from less affluent families.The divergence is especially damaging because the apparent effects of mentoring, including reduced course failures and greater college attendance, are significantly larger for children of lower socioeconomic status. 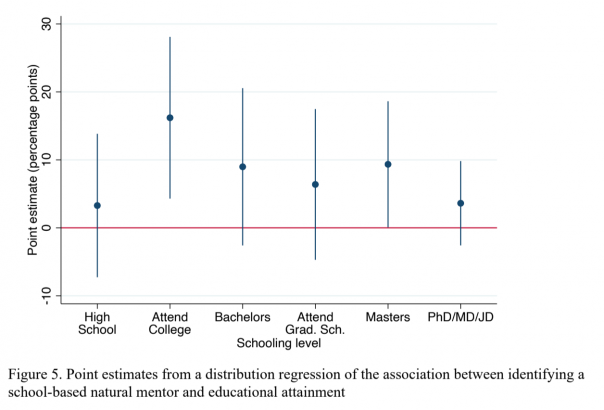 In this aspect, the study’s findings closely coincide with those of another recent working paper, this one examining a more formal mentoring system in Germany. That experiment looked at over 300 high schoolers from 10 cities who were paired with university undergraduates through a program called Rock Your Life! The younger students were drawn from schools in each city’s lower academic track, making them much less likely to attend college. But after years of collecting data, researchers found that receiving mentoring had delivered substantial improvements to their math grades, social skills and declared willingness to attain a workplace apprenticeship.

Ludger Woessmann, a professor of economics at the University of Munich and one of the study’s co-authors, told The 74 that those positive effects accrued almost exclusively to poorer students; in contrast with Kraft’s work, which found the benefits of mentoring to be universal, if weighted somewhat toward the economically disadvantaged, the German experiment showed that more affluent participants received almost no benefits.

“The size of these effects is amazing,” Woessmann said. “It’s somewhat hard to quantify exactly what they mean, but they are huge. And I think it’s a very gratifying result because we really see in all these dimensions — some of these are subjective things, but school grades come from official data — they are really improved, big time. So what we learn is that the life outcomes [of disadvantaged students] are malleable.”