Five years ago, states took back control over public schools.

That’s how Congress framed the adoption of the Every Student Succeeds Act, signed by then-President Obama on December 10, 2015. An unexpected bipartisan gift during a period of divided government, the bill swept aside the top-down mandates of its mostly unloved predecessor, No Child Left Behind. In the future, states would instead be trusted to judge failing schools according to their own criteria and provide them with the targeted assistance necessary to turn things around. The watchword, forever on the lips of politicians and the pens of headline writers, was “flexibility.”

At the half-decade mark, however, some worry that very flexibility could be coming at the cost of equity — and historically underserved students will likely bear that cost. A new report released today from the Alliance for Excellent Education, a national education policy and advocacy group, finds that different states vary dramatically in the schools they identify for support; in several, large percentages of even the lowest-performing schools are not offered crucial federal resources for improvement. The students who attend those struggling schools, disproportionately drawn from poor and minority families, are in danger of being overlooked, the authors warn.

Ominously, the disparities observed don’t even capture the effects of 2020’s unprecedented K-12 event, the coronavirus pandemic. The incoming administration of President-elect Joe Biden still needs to decide whether to allow states to pause this year’s round of standardized testing, but the need to strengthen accountability frameworks is made even clearer by COVID’s disruptions to information-gathering on metrics like absenteeism and high school graduation rates, according to report author Anne Hyslop.

“This data came from Year One of ESSA implementation, before the pandemic, and I don’t think anyone is expecting that these [accountability] systems have gotten better this year,” said Hyslop, the Alliance’s assistant director for policy development and government relations. “If this is the situation before the COVID-19 crisis, it’s incumbent as we think about recovery that we think about what kids need moving forward.”

The analysis relies on publicly available data from 10 states: Arizona, Connecticut, Florida, Indiana, Louisiana, Michigan, Mississippi, New Mexico, Ohio, and Washington State. Hyslop and coauthors Lindsay Dworkin and Ziyu Zhou studied the quality ratings each state assigned to its schools, the demographic composition of those schools, and the criteria by which the states identified them for additional support. The data came from the 2018-19 school year, the first in which states issued ESSA-compliant school ratings and identifications based on the previous year’s data.

The findings show that the law has done what many of its authors vowed it would when debating its provisions in the late Obama era. States are allowed much greater freedom to determine whether a given school qualifies for intervention, a process that requires schools to develop their own improvement plans and allows them access to federal Title I money to implement them.

But that freedom was supposed to be mixed with firm guardrails pushing states to step in when schools persistently underperformed (scoring in the bottom 5 percent of Title I schools statewide, for example, or graduating fewer than two-thirds of high school seniors). Similar rules applied to schools where one or more groups of children, such as low-income students or English learners, were underperforming. Hyslop said that when push came to shove, those precautions didn’t prevent states from under-identifying schools for badly needed help.

“There was hope that the floor that states had to set was high enough,” she lamented. “What we found with this analysis, unfortunately, was that even some of the guardrails that were perceived as the most clear-cut and straightforward…are not so clear-cut in implementation.”

One glaring example involves graduation rates. While states are required to flag high schools where fewer than 67 percent of seniors graduate, in practice, some slip through the cracks because of states’ differing criteria for intervention. Sixty-seven percent may be the federal benchmark, but states don’t have to measure by four-year graduation rate; some rely on a five- or six-year rate, and a few average that rate over successive years. 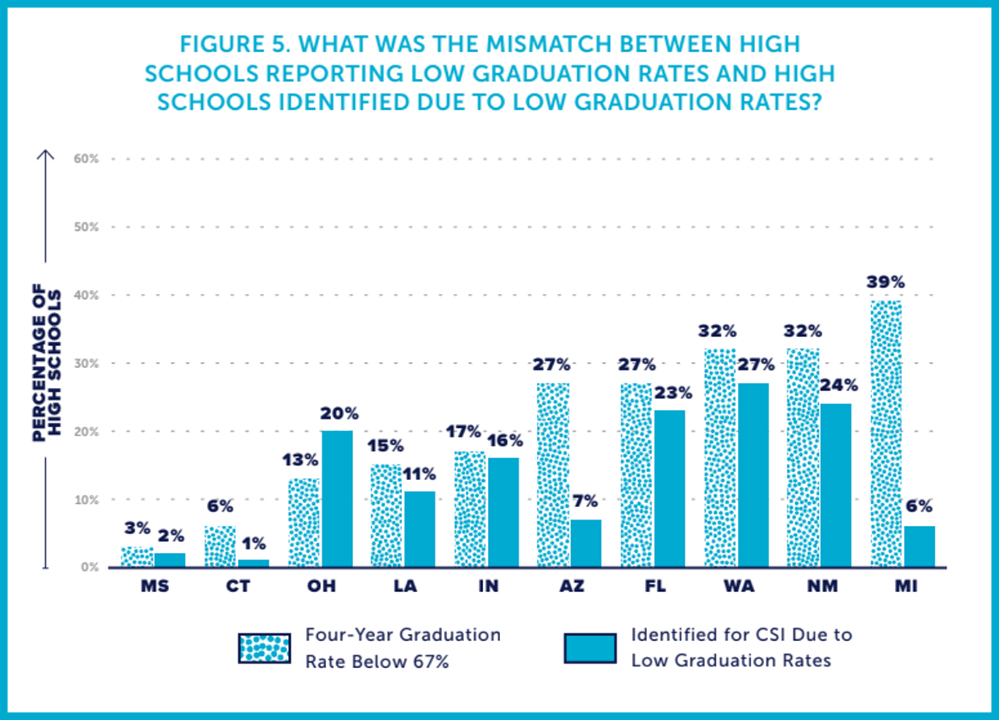 That allows different states to identify radically different portions of their schools. Florida identified nearly 70 percent of its schools for some form of institutional support, while Connecticut identified just 4 percent. Even among schools that are acknowledged to be among the lowest-performing in their states — receiving F ratings — significant differences exist. In Michigan, a full 80 percent of schools rating in the bottom 5 percent statewide were overlooked for support. 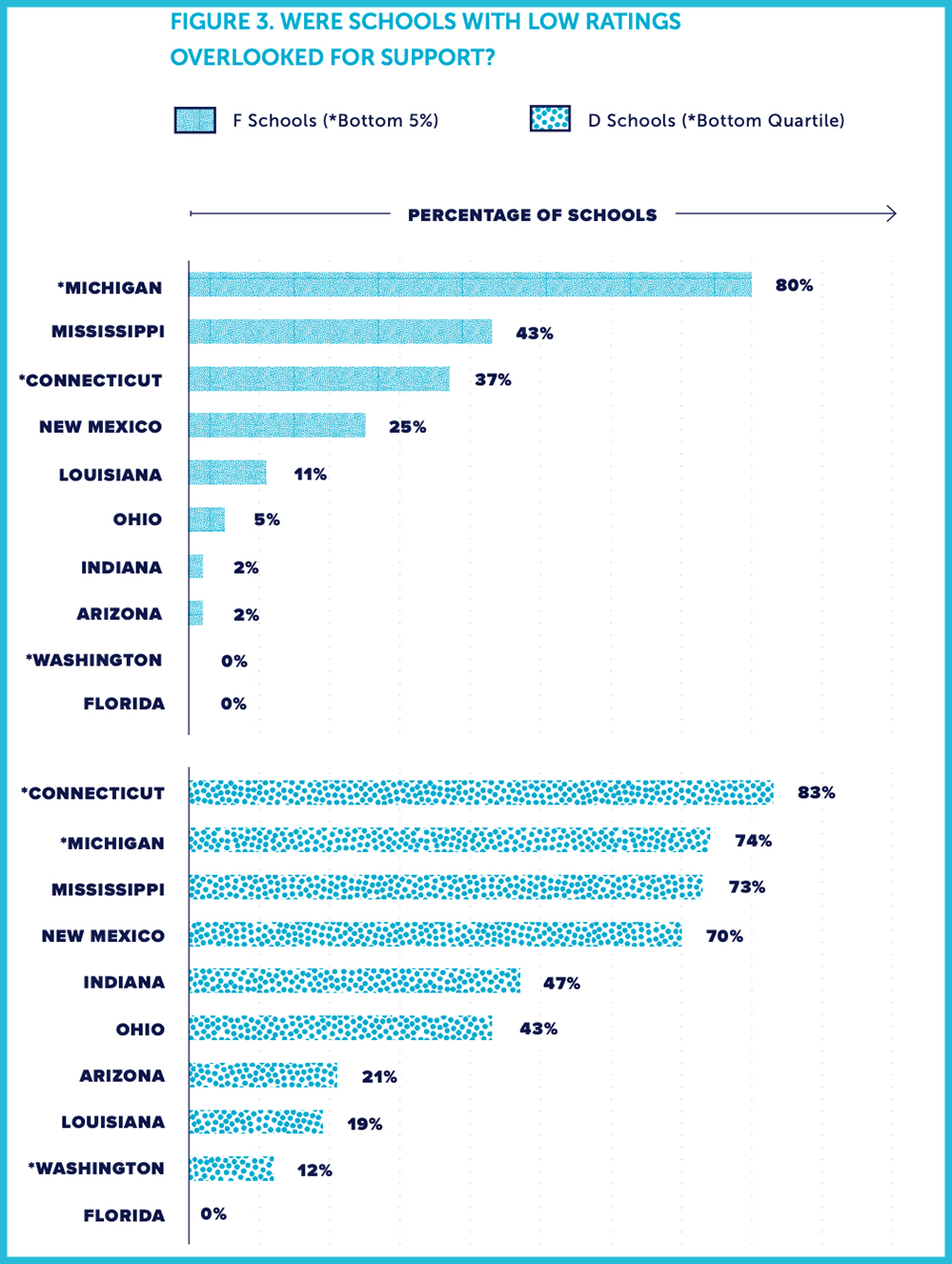 In particular, Hyslop pointed to the example of Connecticut, which is plagued by one of the steepest achievement gaps in the country between white and non-white students. The state’s definition of a “consistently underperforming” group of students is so restrictive, the authors note — it had to perform in the bottom 1 percent statewide across 12 separate academic indicators for three consecutive years — that few, if any, schools met the classification.

Hyslop said she found the process “egregious,” but that it was well within the state’s intended flexibility under federal education law. It “wasn’t a case of Connecticut going around the law,” she added, but rather one of ESSA “[allowing] states to craft a definition of consistently underperforming subgroups to pick and choose which schools it wants to support — and, by extension, which students.”

“There definitely is no Goldilocks, ‘just-right’ number of schools to identify,” she concluded. “But when you see only one school identified for Latino students in the entire state of Connecticut, given the state of their achievement gap, that makes me question whether the system is credible and is set up in a way to make sure that schools serving historically underserved kids are getting the resources and help they need.”