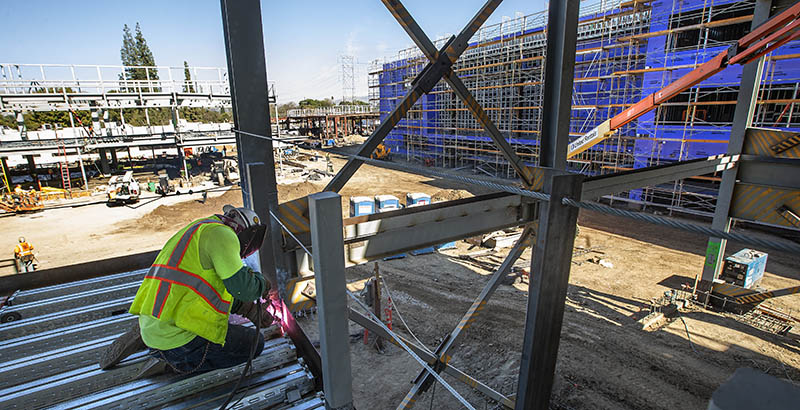 President Joe Biden unveiled half of his massive infrastructure proposal at a Pittsburgh carpentry training center Wednesday afternoon —  a $2 trillion American Jobs Plan that includes building and upgrading schools and child care facilities as well as extending broadband service to all Americans.

While calling on Republicans to support tax hikes on corporations and the wealthy to get the plan through Congress, he also hinted he expects the proposal to face strong opposition.

“Critics say we shouldn’t spend this money,” he said, but added, “There’s no reason why it can’t be bipartisan.”

The plan to spend $100 billion on K-12 facilities includes $50 billion in direct grants for facilities and $50 billion in construction bonds. Another $45 billion in Environmental Protection Agency funds would be used to reduce lead exposure in schools and early-childhood facilities. In addition to expanding broadband, Biden’s plan would seek to lower the cost of internet service.

“Infrastructure was not strong enough even before COVID,” John King, president and CEO of The Education Trust and a former U.S. education secretary and, said Tuesday during a webinar on early-childhood education hosted by New America. “Even before the pandemic, we were underinvesting in the systems and people that are essential in keeping our country running.”

Biden is scheduled to unveil the rest of the full $4 trillion package in the coming weeks. It’s expected to include funding for universal pre-K, lowering the cost of child care for many families and free community college. But it’s unclear whether the plan still includes a permanent increase in the child tax credit, considering that’s a piece likely to see the most opposition from the GOP.

All of these areas — high-quality child care facilities, safe and modern schools and reliable access to the internet — impact children’s ability to learn. And experts have noted for years that major upgrades to the nation’s schools are long overdue. The average school building was constructed 50 years ago, according to the National Center for Education Statistics. Many families with young children, particularly in rural areas, live in so-called child care deserts, where the demand for services far exceeds the supply. And spotty access to high-speed internet over the past year has hampered students’ ability to stay connected to school during the pandemic.

In a statement, Chiefs for Change urged Congress to support the package and said it gives “children from historically disadvantaged backgrounds more equitable access to the tools, programs and facilities they need to learn and succeed in the 21st century.”

But the president’s plan, which calls for a corporate tax hike, won’t be an easy sell. Some Republicans oppose the emphasis on green energy and say Biden should stick to traditional infrastructure projects like roads and bridges.

“School facilities are just like other infrastructure when maintenance and repairs are deferred,” she said. “Operating costs are high, modernization and replacement costs increase, and the hazards to health and safety become more direct.”

But Biden’s plan relies more on bonds than a bill the House passed last year. Sponsored by Rep. Bobby Scott, House education chair, the plan would have used the Title I formula to distribute $100 billion in grants for construction and provide subsidies for interest payments on another $30 billion in bonds.

Deteriorating school facilities, advocates say, are an equity issue. School districts serving low-income students are more likely than those in wealthier areas to report their schools are in poor condition, Filardo’s research shows. But Biden’s plan “does little to nothing for the poorest districts,” she said. Lower-income communities are less likely to pass bonds or have the tax base for repayments.

Students in high-poverty communities and rural areas have also had the hardest time staying connected to their classes since schools closed last year. While districts have distributed mobile hotspots and formed partnerships with service providers, many of those solutions are temporary, according to a recent report. In addition to expanding broadband, Biden’s $100 billion proposal includes lowering the cost of internet service.

Evan Marwell, founder and CEO of the nonprofit EducationSuperHighway, said Biden’s plan “provides the resources necessary to close the broadband infrastructure gap once and for all, and sets the stage for addressing the affordability gap that is responsible for two-thirds of the digital divide.”

Rural areas lack adequate child care facilities as well, but some middle class communities also qualify as child care deserts, according to research from the left-leaning Center for American Progress. Biden’s plan calls for Congress to spend $25 billion on building and upgrading child care facilities and expanding a tax credit as an incentive for businesses to build onsite child care centers. Employers would receive half of the first $1 million they invest on a new facility.

In the coming weeks, Biden is slated to introduce the American Family Plan, which is expected to include universal pre-K and lower child care costs for many families. Biden has proposed increasing Title I funding to pay for pre-K, but it’s unclear how he plans to reach universal access.

On Wednesday, the National Institute for Early Education Research at Rutgers University released a federal and state cost-sharing plan that would expand access to pre-K for 5 million additional 3- and 4-year-olds by 2040. About 1.8 million preschoolers are currently enrolled in publicly funded programs.

In the first four years, the plan would cost the federal government $7.7 billion, with state and local governments picking up $13.3 billion. Spending would increase gradually over time.

“At its current pace and without federal government leadership, the United States won’t reach all children with free preschool before 2100,” Steven Barnett, senior co-director of the institute said in a statement. “This proposed cost-sharing partnership provides a measured and predictable path to universal high-quality preschool within a reasonable time frame.”