Elected School Board Members Are Most Likely to Be White, Wealthy & Republican, New Study Finds 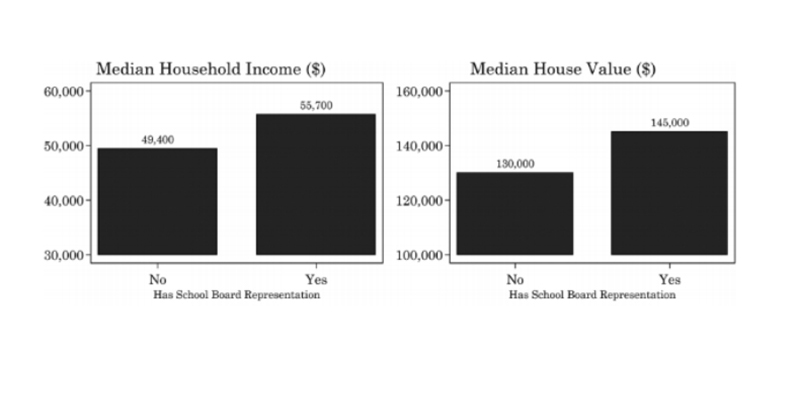 Who should have the greatest say over education? Elected school boards, most agree.

Decades of opinion polling show that the public prefers local control of schools to federal or state mandates. From left-leaning parents bent on reducing standardized testing to conservative activists still ruing the loss of school prayer, Americans generally believe that authority over community classrooms should be wielded by community members.

So who controls the elected boards? In spite of their importance, we know relatively little about the composition of these most basic entities of school governance. But a new study published in the American Educational Research Association’s open access journal has uncovered a big finding: School board members are disproportionately likely to come from wealthier, whiter, and more educated neighborhoods within districts.

The study, conducted by Vanderbilt University professor Jason Grissom and University of Pennsylvania professor Marc Meredith, suggests that the most advantaged areas of a district — and the schools located within them — receive greater representation than comparatively disadvantaged ones.

Grissom and Meredith focused their research on two election cycles, 2009 and 2011, when candidates ran for seats on school boards in 610 Ohio school districts. They contacted local election offices to gain residency data for about 4,500 candidates, linking them to their individual census blocks (the Census Bureau’s smallest geographic unit, often assembled together in block groups of roughly 1,500 people). Next, they used information from the National Center for Education Statistics to further track each candidate to his or her zoned neighborhood school.

There is even a partisan dimension to the trend. Using voter registration data, Grissom and Meredith found that the more Democratic voters resided within a census block group, the less likely it was to produce a school board member.

The disparities in socioeconomic status are far greater in urban and suburban areas than in rural ones, the authors note, because earnings and home values are generally more polarized in cities. Rural census block groups that produce school board members enjoy a $11,000 home value premium versus those with no school board representation, but that gap more than doubles among city census block groups with or without representation. 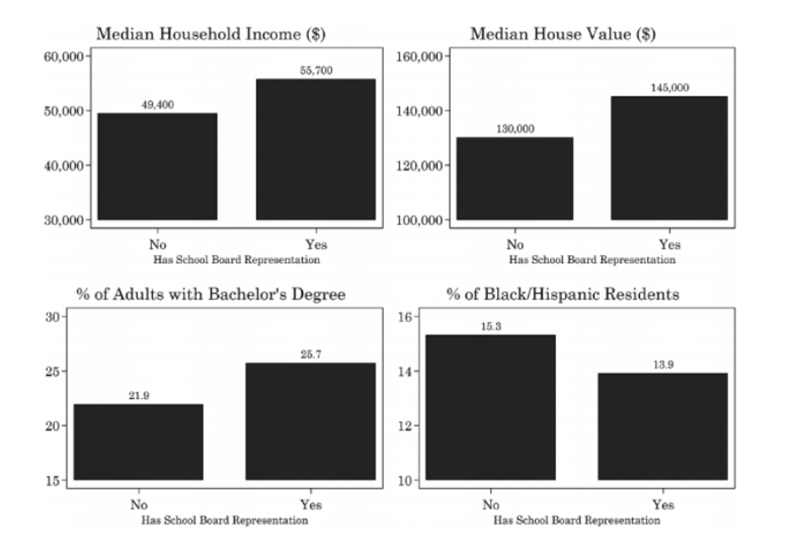 Schools that have board members living in their attendance zones enroll smaller percentages of children eligible to receive free or reduced-price lunch, a common marker of low-income status. Children at those schools also perform better, relative to the rest of the state, than schools with no board representation, according to achievement data collected by the Ohio Department of Education.

In essence, the study finds that Ohio school boards — which hold significant influence over the school districts they oversee — provide a greater voice to families and schools that already hold an edge over their neighbors.

That presents major governance problems, Grissom and Meredith conclude. Board members might favor their nearby schools with greater resources (this is true even if their kids aren’t enrolled in those schools, since school quality is tightly linked with surrounding property values). In a broader sense, though, privileging the input of the wealthy and well-connected can contribute to equity problems between schools.

Education researchers have previously chronicled the remarkable ability of well-off parents to influence school board decisions in ways that benefit their children. Those parents are willing to use their professional skills, along with the resources of extra time and money, to combat district decisions they don’t like. This spring, for instance, a group of parents in New York’s Upper West Side rose in angry protest against an integration campaign that they felt would deny their own kids access to well-regarded schools.

To address the problem of unequal representation, the authors suggest that states eliminate some of the hurdles that school board candidates face in running for office — for example, forcing aspiring candidates to pay filing fees and collect signatures from other voters in their district, or to be U.S. citizens registered to vote.

“In addition to targeted recruitment of candidates from underserved areas, removing barriers to candidate entry and building sources of support for candidates who may have less access to financial resources may help ensure that school board members are more representative of the populations they serve,” the authors conclude.