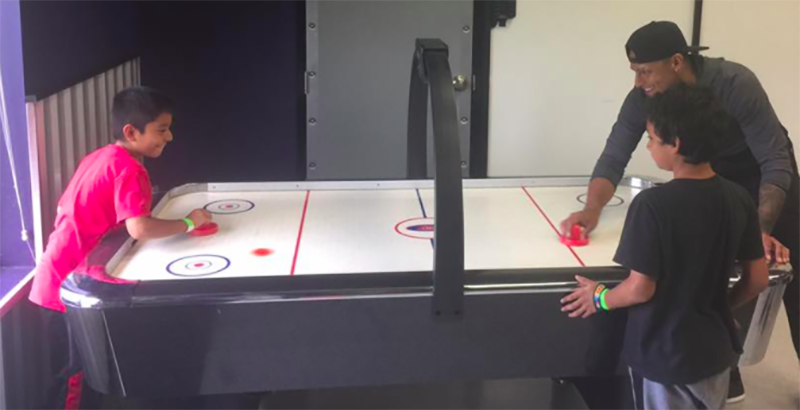 A teacher plays air hockey with students at a day camp. Photo: twitter.com/andi9683

Teachers are wired to help kids. It’s what they do.

So when Simone Kern, director of literacy interventions at YES Prep Public Schools in Houston, couldn’t go in person to work with children evacuated to shelters after Hurricane Harvey, she found a way to organize teachers who could.

She started with a simple Facebook post asking if teachers in her social network would be willing to go into shelters in southeast Texas and help teach, engage, and care for displaced children.

Kern herself was stuck in Porter, Texas. She had evacuated her home in Houston, was recovering from surgery, and had a new baby. But she was able to post on Facebook — and she was quickly overwhelmed by responses. Now, more than 1,600 certified teachers have joined her new group, called Teachers Volunteering in Shelters, providing lessons, activities, and childcare for families displaced by Harvey. The website has a sign-up sheet for requesting teachers at a shelter.

Some parents, she said, need something as simple as reliable childcare so they can clean up their homes, call their insurance companies, or even just take a shower.

“Who better can parents trust than teachers, who are already trained and certified to take care of kids?” she said. “Teachers know how to deal with chaos; teachers know how to make magic happen on a shoestring budget, or no budget at all.”

Teachers Volunteering in Shelters: TEAM CYPRESS ready for Day Camp in Copperfield! Had a blast with AWESOME kiddos!!! Made my heart smile ☺️ pic.twitter.com/FrIRjuNMBZ

Even after Houston’s schools reopen, Teachers Volunteering in Shelters plans to continue supporting students and families by providing activities on Saturdays and tutoring during the week to close gaps in childcare and help students who are struggling in class because of trauma and missed days of school, said Sarah Gonzales, a teacher and spokeswoman for the organization.

“The ongoing work is important because these children are potentially going to be displaced for months … and having that uncertainty makes it hard to focus at school,” Gonzales said.

School is expected to start Sept. 11 for the Houston Independent School District, the largest of 18 districts in the Houston Metro area. But some Houston schools will not be ready, and Superintendent Richard Carranza has emphasized that schools will not reopen until they are completely safe, The Wall Street Journal reported. Other districts in the area started as early as Tuesday or plan to open throughout the week, according to The Houston Chronicle.

As of Saturday, district officials had visited 245 of 280 total schools and found about 200 had standing water, 53 had major damage, and 22 had “extensive” damage, The Chronicle reported.

Kern said she has been amazed by how her initiative has united public, private, and charter school teachers and administrators from all over southeast Texas. There will always be a need for teachers to cooperate to serve students, she said, and she believes Teachers Volunteering in Shelters can help meet that need.

“This community is going to have needs for months, if not years, into the future, because of Harvey,” she said.