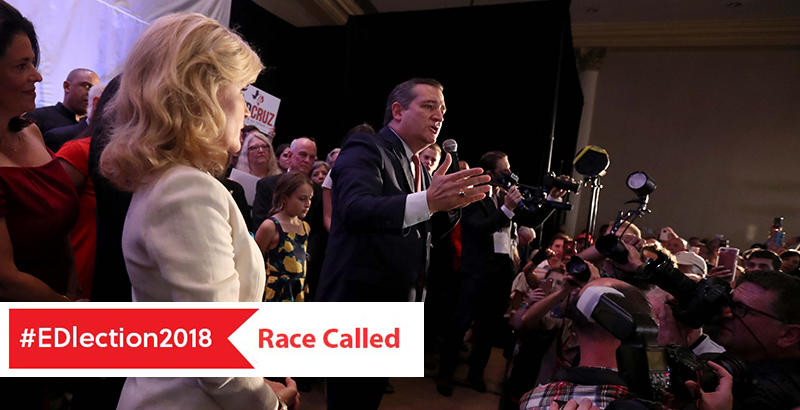 A national following, a tsunami of early votes and an eleventh-hour social media appeal by Beyonce: In the end, none of it was enough to push Rep. Beto O’Rourke past incumbent Texas Sen. Ted Cruz. With more than 80 percent of votes tallied, NBC News called the race about an hour after polls closed in much of the state.

Republican Cruz held onto his seat with 51 percent of the vote, the network reported, with O’Rourke winning more than 48 percent. The margin was narrower than most of the polls, which consistently showed Cruz with a small but comfortable lead.

Education was one of many arenas in which the candidates had starkly contrasting positions. Cruz favors arming teachers, supports private school vouchers and was a sharp critic of the Obama administration’s inclusion of LGBT students in its enforcement of federal civil rights laws.

On the campaign trail, O’Rourke called for fixing Texas’ notoriously hobbled school funding system, for shoring up teacher retirement benefits and for keeping public dollars out of private education. He did not talk about his wife’s work starting and running a public charter school and pushing for dramatic increases in the quality of education in El Paso, where the couple live.

Whether either candidate would have much influence over K-12 education policy in the Senate was irrelevant, according to political scientists. What mattered was how each talked about the issues, signaling something broader about their values to voters: in Cruz’s case, small government and fiscal restraint, in O’Rourke’s economic opportunity.

(Check out what’s going on in congressional races across the country on The 74’s liveblog.)

O’Rourke also pledged not to take campaign funds from political action committees, forcing him to raise a war chest from small, individual donations. Educators — many from outside Texas — were among his top contributors.

In the runup to Janus vs. AFSCME, the Supreme Court’s decision striking down union agency fees earlier this year, the National Education Association-affiliated Texas State Teachers Association endorsed O’Rourke despite his wife’s work with charter schools and its El Paso affiliate’s campaign to halt the work of Choose to Excel, the education arm of the Council on Regional Economic Expansion and Educational Development, which is headed by Amy O’Rourke.

Threading the Needle on School Reform in TX Senate Race

Had O’Rourke won, it would have been the first time in 24 years that a Democrat was elected to statewide office in Texas. Within minutes of Cruz claiming victory, pundits were crediting O’Rourke with sparking a Democratic revival in Texas and speculating about his political future.

Will Beto O’Rourke run for president in 2020? Defeat to Ted Cruz increases odds of run against Trump https://t.co/XXANRwDstG #ElectionNight pic.twitter.com/8aNER0Jx7L