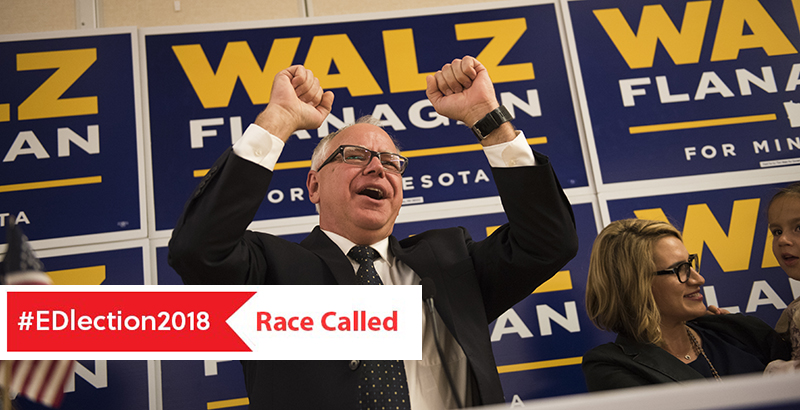 After a dozen years representing southeast Minnesota in Congress, Tim Walz is moving into the governor’s mansion. If anything, he promises to be even more of a traditional Democratic-Farmer-Labor leader in terms of education than outgoing Gov. Mark Dayton, whose administration blocked numerous centrist efforts to push schools to close some of the largest racial and socioeconomic achievement gaps in the nation.

“I am labor, I stand with labor, and as governor, I will keep Minnesota a labor state,” he pronounced on multiple occasions, sometimes accompanied by the hashtag #WalzOrWisconsin, a jab at Wisconsin Gov. Scott Walker.

I am labor, I stand with labor, and as governor, I will keep Minnesota a labor state. I’m incredibly proud to have the endorsement of all 14 building trades unions in this state. #WalzOrWisconsin https://t.co/PdETCfeesk

It’s perhaps not surprising, then, that Walz’s frontline education platform jibes with the positions of Education Minnesota, the state’s merged affiliate of both the National Education Association and American Federation of Teachers. He has called for more state funding for schools, more school support personnel such as counselors and nurses and universal preschool, something Dayton pushed relentlessly versus the pre-K funding targeted to low-income children most early childhood education leaders pushed for.

Though not on the stump, Walz has also called for innovations in science, technology, engineering and math instruction, personalized learning, high school redesign and the diversification of Minnesota’s teacher corps, which is 96 percent white. Whether the somewhat different agendas can be explained by Democrats’ universal need to get their left flank to the polls remains to be seen.

Walz spent 24 years in the National Guard and 20 as a teacher and coach, a career trajectory launched by a stint in the classroom on the Pine Ridge Indian Reservation in South Dakota.

(Check out what’s going on in governor’s races across the country on The 74’s liveblog.)

Walz’s challenger, one-term state lawmaker Jeff Johnson, called for a laundry list of changes in education topped by “simplified” school funding. Johnson said he would push to reform the state’s Board of Teaching, despite the fact that it was dissolved at the beginning of the year after a decade of efforts to overhaul teacher licensure.

Criss-crossing the state in Paul Bunyan’s lumberjack flannels, Walz was boosted by his charismatic running mate Peggy Flanagan, a former state lawmaker who has the distinction of being both the youngest person ever elected to the Minneapolis School Board and the first Native American. The former head of the state’s branch of the Children’s Defense Fund, she has long advocated for equity in services for Minnesota children.

As of midnight EST, with 67 percent of precincts reporting, Walz had captured 55 percent of the vote to Johnson’s 42 percent.