EDlection2018: 2016 National Teacher of the Year Jahana Hayes Elected to U.S. Congress in CT, Promising to Back Teachers and Increase School Funding 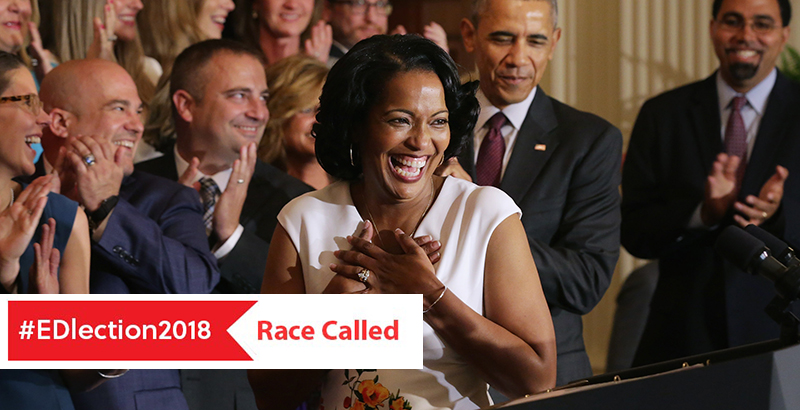 Democrat and 2016 National Teacher of the Year Jahana Hayes made history Tuesday night, becoming the first black woman elected to Congress in Connecticut.

“We were waiting upstairs for all of the numbers to come in,” Hayes, 45, told a crowd of supporters. “But there is no path to victory — so I am declaring it right here and now.”

Santos hadn’t conceded by midnight, calling Hayes’ declaration of victory “premature.” He is a military veteran, immigrant and the former mayor of Meriden, Connecticut.

The mother of four regularly generated media headlines for defying the odds — in her personal life and on the campaign trail.

Hayes grew up in Waterbury, Connecticut’s housing projects, was temporarily homeless and gave birth to a daughter at 17. But after earning three college degrees and working for years as a high school history teacher, she nabbed the 2016 National Teacher of the Year Award, receiving accolades from President Barack Obama.

“She gets through to her students precisely because she remembers what it was like to be one of them,” Obama said at a White House ceremony in May 2016.

Hayes mounted her campaign this year while working in the school district’s central office, where she mentors new teachers.

Though she failed to win the endorsement of the Connecticut Democratic Party, Hayes clinched an unexpectedly sizable primary victory — earning 62 percent of the vote — over seasoned opponent and local city official Mary Glassman in August.