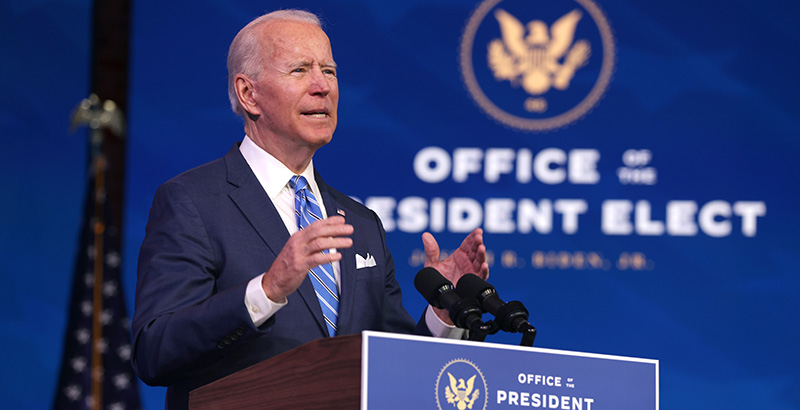 Education groups and Democrats in Congress are applauding President-elect Joe Biden’s $130 billion proposal to help schools reopen with safety procedures in place and to target the needs of students hurt most by the pandemic. But some experts noted that even with the Democrats in control, Biden might struggle to get the package through Congress.

The total $1.9 trillion American Rescue Plan backs up Biden’s earlier statements that he viewed the relief package that President Donald Trump signed in December as only a “down payment” on recovery.

Democratic Sen. Patty Murray of Washington, expected to be the next chair of the education committee, agreed.

“When we passed a relief bill in December, I was clear that we needed to double down in the year ahead on fighting for policies that truly reflect the depth of the crisis we’re facing, and help us dig out of this pandemic and come back stronger and fairer,” she said in a statement.

The education portion of the package that Biden will present to Congress includes $130 billion that schools would be able to use for initiatives ranging from lowering class sizes to allow for social distancing to providing tutoring and summer school. The plan also includes a $5 billion “hardest hit education fund” for governors to spend on K-12, higher education or early childhood. The plan notes that Black and Hispanic students and those with disabilities have missed the most learning while schools have been closed.

In his comments Thursday night, Biden reiterated his goal to reopen most K-8 schools in the first 100 days of his administration.

“We can do it if we give school districts, communities and states the clear guidance they need as well as the resources they will need that they can not afford right now because of the economic crisis we are in,” he said.

John Bailey, a fellow at the conservative American Enterprise Institute said in a summary of the plan that even with Vice President-elect Kamala Harris on hand to break a tie in the 50-50 Senate, the full plan might not win approval.

“It’s difficult to see how this gets 60 votes in the Senate or even 51 if done through reconciliation,” he wrote in his analysis. “A number of members will balk at the size given that December’s funds haven’t even begun to be used.”

But he added that it took nine months between the March and December relief packages, so the “Biden team is starting the discussion now understanding that it may not pass until the Spring or later.”

“This will ensure that the educators and school board members with the best knowledge and awareness of community needs have the tools to serve their students,” she said.

Following calls from Chiefs for Change on Wednesday to prioritize schools as part of the vaccination rollout, the COVID-19 response will include $50 billion for tests in order to provide them for free and, in part, to “ensure that schools can implement regular testing to support safe reopening.”

In her response, American Federation of Teachers President Randi Weingarten said schools want to be part of the vaccination effort. “The AFT will join them to distribute the vaccine, scale testing, expand healthcare, maintain public services and safely reopen school buildings within the first 100 days,” she said.

The plan also includes a $25 billion stabilization fund for child care providers and $15 billion to help families afford child care costs, particularly women who had to leave their jobs because they could no longer afford care or their centers shut down. The December relief bill included $10 billion for child care.

In keeping with his campaign promises, Biden is also asking Congress to approve a child care tax credit of up to $4,000 for one child or $8,000 for two or more children for families earning less than $125,000 annually. Families earning up to $400,000 would receive a partial credit.

“Stabilizing the child care sector that has been decimated — and prioritizing the needs of parents, providers and the workforce — is essential to stabilizing the economy and sustaining families,” said Julie Kashen, the director of women’s economic justice and a senior fellow at The Century Foundation.