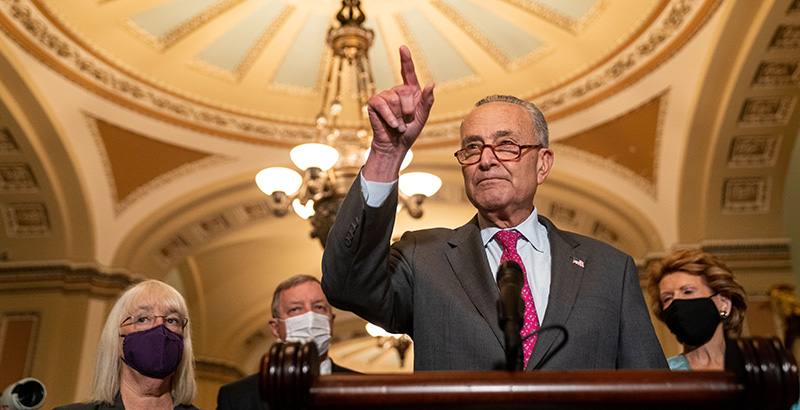 The U.S. Senate passed the $1.2 trillion infrastructure bill on Tuesday, with 19 Republicans joining 50 Democrats in approving the measure.

“I want to thank a group of senators, Democrats and Republicans for doing what they told me they would do,” President Joe Biden said. “They said they’re willing to work in a bipartisan manner, and I want to thank them for keeping their word.

“During remote learning during the pandemic last year,” he said, “we saw too many families forced to literally sit in their vehicles in a fast food parking lot so their children can get on the internet they couldn’t afford and didn’t have access to at home.”

The bill — the first phase of Biden’s domestic agenda — now heads to the House, but Speaker Nancy Pelosi isn’t expected to introduce it until it’s clear that all Democrats will support the second, and larger, social spending package.

The U.S. Senate is expected to pass a bi-partisan $1.2 trillion infrastructure package on Tuesday that includes funding for electric school buses, eliminating lead pipes in schools and expanding the nation’s access to broadband.

Most of President Joe Biden’s agenda for education and families, however, is included in a separate $3.5 trillion resolution Senate Democrats unveiled Monday, with plans to pass legislation over Republican opposition.

Progressive House members have been threatening for months that they won’t approve one without the other, setting up a potential drawn-out battle this fall if Democrats don’t get everything they want in the larger “American Family Plan.” Republican leaders, meanwhile, have urged Democrats to separate the two packages to ensure that their priorities to fix roads and bridges and expand public transportation, among others, make it to the president’s desk. Thus far, House Speaker Nancy Pelosi has resisted the piecemeal approach, showing a determination to pass as much of the president’s agenda as possible within his first year in office.

“I don’t believe leadership would move one [bill] without being confident the other is locked down,” said Julia Martin, legislative director of Brustein and Manasevit, a Washington-based education law firm.

The strategy, she said, is an effort to ensure the larger social spending bill — which includes universal pre-K, free community college and an extension of the Child Tax Credit — would pass despite reservations from moderates over the cost and objections from more liberal members that it doesn’t go far enough.

With Democrats in control of both houses in Congress, they can pursue a process known as reconciliation, which doesn’t require any Republican votes.

Some Democrats, for example, want to see the larger Child Tax Credit, which families began receiving last month, become permanent. The one-year increase passed as part of the March relief bill, and Biden’s plan extends it through 2025. House and Senate Democrats are also pushing for universal school meals, but Biden’s proposal doesn’t go that far. He’s calling for free school meals for all students in the highest poverty districts, covering about 70 percent of students in the elementary grades.

The chance Democrats could lose more seats in Congress is another reason they’re pushing to pass both packages. With midterm elections next year, some experts expect Republicans to challenge the majority on issues such as crime, inflation, and immigration.

Democrats “could very likely lose the House in ‘22, so this is the moment,” said Danny Carlson, associate executive director for policy and advocacy at the National Association for Elementary School Principals.

The $3.5 trillion package includes $726 billion for the Senate education committee, which will write bills for pre-K, expanding access to child care, building and renovating schools, and addressing teacher shortages. Senate Majority Leader Chuck Schumer of New York, in a letter Monday, asked the committees to submit their bills by Sept. 15.

He also urged Democrats to “go on the offense” during the upcoming recess “to explain how our budget will lower costs and cut taxes for American families.”

But Republicans argue it will only increase the national debt. In a tweet, Senate Minority Leader Mitch McConnell called the package “far-left radicalism” and said on the floor Saturday that budget committee Chairman Bernie Sanders’s “socialist shopping list will make every disagreement we’ve had in landing the infrastructure compromise look like a rounding error.”

Last week, the Congressional Budget Office released estimates showing the infrastructure bill would increase the federal deficit by $256 billion over the next 10 years. That figure isn’t likely to derail the bill, but is fueling objections to additional spending

McConnell specifically mentioned the administration’s child care proposal, calling it “government meddling … that would privilege certain families’ choices over others.’”

Biden’s plan seeks to lower the cost of child care, while still giving parents options, including centers and family child care providers. But some conservatives argue there’s still too much emphasis on group settings.

Katharine Stevens, a resident scholar at the conservative American Enterprise Institute, said while she understands that full-time child care is essential for working parents, “it’s not optimal for the majority of children — even harmful for some — during the most crucial period of development.”

The plan would increase pay for providers, which can allow centers to hire better-qualified teachers, but Stevens said ensuring all programs reach high quality is still “a very big if.”

When Congress returns in the fall, the Senate will also have to take up the fiscal year 2022 budget. The House has already passed seven appropriations bills, including nearly $103 billion for the Department of Education, a $29 billion increase over 2021.