Your DeVos Hearing CliffsNotes: These Are the 10 Education Issues Sure to Surface in the Senate 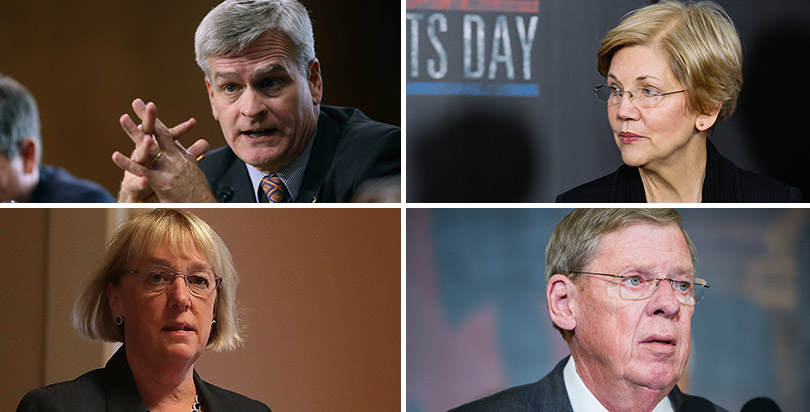 Get ready for the fireworks — at least as many as there can be in education policy, anyway.

Democrats are sure to spend a great deal of time hammering DeVos on her wealth — any financial entanglements that emerge from her ethics disclosure — and her support of Republican political campaigns (including some GOP members of the committee) and education reform advocacy groups. Republicans are likely to praise DeVos’s long advocacy record. Chairman Lamar Alexander last week, after meeting with DeVos, predicted she “will impress the Senate with her passionate support for improving education for all children.”

Once those battle lines are drawn, here are some more substantive policy questions that members of both parties could ask during their five minutes of allotted time each.

Sen. Lamar Alexander – The chairman, from Tennessee, is himself a former education secretary. He is certain to focus on how DeVos will implement the Every Student Succeeds Act, particularly the supplement-not-supplant spending regulation that governs how school districts must show they are using federal dollars to enhance services to disadvantaged students rather than replacing local dollars they should be spending. Those rules more than anything else have been the sharpest point of contention in his relationship with Education Secretary John King, who has advocated regulations Alexander says run afoul of ESSA because they would require consideration of teacher salaries. Look for Alexander to try to win a pledge from DeVos that she’ll scrap King’s proposal and implement something that would allow districts to dole out resources without considering a school’s poverty status.

(The 74 Interview: Lamar Alexander on Keeping ESSA From Becoming the Next Obamacare)

Elsewhere on K-12, look for Alexander to ask DeVos friendly questions about her plans for school choice. Alexander sponsored an amendment during Senate floor consideration of the Every Student Succeeds Act that would allow federal funds to follow low-income students no matter the type of school they attend — traditional public, charter, private, online, etc.

On higher education, Alexander has focused on reducing the administrative burden on colleges, so he is likely to ask DeVos which Obama administration regulations, like the “gainful employment” rules governing debt loads at for-profit colleges, she plans to end.

Sen. Bill Cassidy – The Louisiana senator and physician has long addressed the issue of dyslexia. His daughter was diagnosed at a young age, and Cassidy and his wife opened a charter school in Baton Rouge focused on children with the learning disability.

Sen. Johnny Isakson – The Georgia senator, one of the few primary authors of No Child Left Behind still serving in Congress, has sought to reduce testing burdens. “We caught plenty of hell for requiring too much testing” under NCLB, he said during King’s 2016 confirmation hearing. There, he asked King how to square the mandated 95 percent participation rate in ESSA with guarantees, authored by Isakson, that students can opt out of exams if states allow it. The Education Department warned New York and about 10 other states that their 2015 participation rate fell below 95 percent following an opt-out backlash.

Sen. Lisa Murkowski – Murkowski, representing Alaska, is sure to ask about DeVos’s views on rural education, given the makeup of her state. She’s also likely to ask DeVos to define the federal government’s responsibility for educating American Indian children, particularly preserving their native languages.

Sen. Pat Roberts – The Kansas senator is likely to turn the discussion to the Common Core. He asked King about new prohibitions in ESSA barring the Education Department from mandating curricula. The issue was Trump’s top education talking point for much of the campaign when he pledged to get rid of the more rigorous standards that many conservatives see as federal overreach. DeVos, who has supported organizations that were pro–Common Core, had to clarify her own position on the subject shortly after her nomination was announced, saying she is “not a supporter—period” and that while she favors high standards, the Common Core “turned into a federalized boondoggle.”

Sen. Bob Casey – Casey, of Pennsylvania, authored part of the Violence Against Women Act that expanded the law to require that incidences of stalking and dating violence be reported to the campus community and in the college’s annual security reports. It also mandates sexual assault prevention training for new employees and students. He could question DeVos on how she’ll ensure protections for victims of sexual assaults on college campuses under Title IX. The Obama administration issued guidance requiring a lower evidentiary standard for adjudicating the cases, and some conservatives saw it as eliminating due process protections for accused perpetrators.

Sen. Al Franken –The Minnesota Democrat has pushed for greater federal protections for LGBT students; look for him to follow up on a letter openly gay members of the House sent last week expressing “deep concern” about DeVos’s stance on LGBT students and past DeVos family donations to groups “known for their anti-LGBT activities.”

Sen. Chris Murphy – Murphy, of Connecticut, vowed early on to make sure DeVos faced sharp questioning. He was one of the most outspoken accountability hawks during the ESSA debate. He could focus on maintaining strong “guard rails” in ESSA that require intervention in schools that fail to educate low-income children or those of color, particularly invoking it as a civil rights issue.

Sen. Patty Murray – Murray, as the committee’s top Democrat, will take the lead in asking DeVos not only about her financial issues but also about things like her advocacy record in Michigan, accountability for charter schools (particularly those that are for-profit), and vouchers and private school choice. If she dives into other specific policies, look for Murray to ask about early learning — she was a preschool teacher in her native Washington state and sponsored an ESSA amendment to give states more leeway in using federal Title I funds to provide pre-K to high-need students.

Sen. Elizabeth Warren – Warren already publicly released a list of questions she’ll ask DeVos, including on private school choice, ESSA accountability and several in higher education. Warren has long focused on reducing student debt burdens, even threatening to vote against King’s nomination if he didn’t pledge new protections for student loan borrowers, particularly those who had enrolled at fraudulent schools that went bankrupt and closed. And a group of charter schools in her home state of Massachusetts, among the top-performing in the country, made waves last week when they wrote to Warren, asking her to push DeVos on strong accountability for charters.