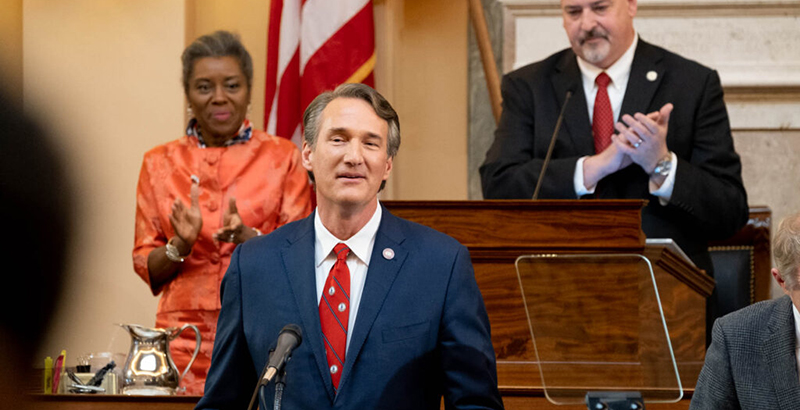 The possibility was first raised by Lt. Gov. Winsome Sears in a Monday afternoon appearance on Fox News. While Youngkin had previously stated he planned to use “every resource within the governor’s authority” to address noncompliant districts, he didn’t outline specific enforcement actions. Sears, though, suggested that state funding could be used as leverage in response to a question from a Fox interviewer.

“There are certain combinations of money we send to the local school boards and he could withhold some of that,” she said. When asked by the Mercury whether Youngkin agreed with the statement, spokesperson Macaulay Porter said Tuesday that Democrats had “willfully mischaracterized” the remarks, but did not say whether Youngkin was considering the possibility or other specific enforcement mechanisms.

“The executive order allows parents to opt out of mask mandates so that they can make the best decisions for their children and anyone who wants to wear a mask is free to do so,” Porter said. “Consistent with the governor’s past remarks, we will consider the tools available to make sure that parents’ rights are protected.”

Both legislators and local school divisions have been scrambling to respond to the directive, which has already been challenged in the Supreme Court of Virginia by a group of Chesapeake parents, according to the Richmond Times-Dispatch. More than a dozen other school districts have already announced they plan to keep their universal masking policies despite the directive.

It’s true that the executive order does not ban masks in schools, despite some characterizations by the Democratic Party of Virginia and some individual legislators. Instead, it’s largely directed at parents, allowing them to opt their children out of any universal masking requirement adopted by their division.

That still puts school districts in a difficult position as Virginia continues to see historically high levels of new coronavirus infections, largely driven by the highly infectious omicron variant, according to state health officials. Divisions are required to stay open for in-person instruction under a law passed last February by the state’s General Assembly and signed by former Gov. Ralph Northam. But the language of the bill also orders local school districts to follow mitigation guidance from the Centers of Disease Control and Prevention “to the maximum extent practicable.”

Current federal guidance explicitly recommends universal masking for all students, staff and visitors regardless of vaccination status. Shortly after those guidelines were published last July, Northam also announced that masks would be required in Virginia schools.

For local divisions, there’s wide concern that following Youngkin’s executive order puts them in direct conflict with existing state law. Others are worried about the timing amid a deluge of staff and student absences. Large Virginia school districts, including Fairfax, Loudoun and Prince William, are among those who say they plan to keep their universal masking policies despite Youngkin’s directive. Even divisions in more conservative areas of the state are encouraging students and staff to maintain the use of face coverings.

“We are struggling to keep all schools open for in-person learning due to quarantines, isolations and normal absences among faculty and support staff,” Bristol superintendent Keith Perrigan wrote in a Monday email to families. “We will strongly encourage everyone to wear masks until the Omicron surge ends.”

While Youngkin’s directive doesn’t take effect until Monday, potential enforcement is still top of mind for many school administrators. Ben Kiser, executive director of the Virginia Association of School Superintendents, said there’s been no communication from the administration regarding the governor’s order. The text directs Jillian Balow, the state’s newly appointed superintendent of public instruction, to issue new guidance for schools on COVID-19 mitigation measures, but Kiser said there are still significant questions on how communities with surging case numbers should protect both students and staff.

“There’s just a lot of uncertainty right now as a result of the order,” he said. “And I hope we’ll eventually get clarity so we can do what’s required of us.” Both the CDC and the Virginia chapeter of the American Academy of Pediatrics recommend wearing masks in schools as a way to curb the spread of COVID-19. And while some studies have shown mixed results on how extensively face coverings curb transmission in schools, wider research shows masks can significantly reduce infections and deaths, especially combined with other mitigation measures like vaccinations and social distancing.

Some Republican-led states have already set a precedent for punishing schools with masking policies, including Texas, where the attorney general sued districts that defied Gov. Greg Abbott’s ban on local mandates. The Florida Department of Education also threatened to withhold funding from schools that kept their mask policies after a similar executive order from Gov. Ron DeSantis.

Some legal experts, though, said they’d be surprised if the issue progressed as far in Virginia. Historically, the state’s pandemic orders have largely counted on compliance despite the threat of enforcement. There’s also a legitimate constitutional question of whether the governor has the authority to supersede state law — in this case, the legislation directing schools to reopen — or local school board policies.

In his executive order, Youngkin cited a brief section of Virginia code giving parents the “fundamental right to make decisions concerning the upbringing, education, and care” of their children. That section was codified into law in 2013 after a court decision involving parental custody rights. Sen. Jennifer McClellan, D-Richmond, said it doesn’t override the law passed last year — or change the state’s constitutional language regarding public education.

“The constitution makes clear that overall education policy is made by the Board of Education,” she said in a Tuesday morning news conference organized by General Assembly Democrats to push back on the executive order. “But the day-to-day supervision of schools is left to local school boards.” The governor himself has previously stated that school divisions would have to make their own decisions on whether to keep local mask mandates in place.

If Gov. Youngkin does try to withhold funds from localities that want to keep school mask mandates in place, it would seemingly contradict what he us in Nov: “Localities are going to have to make decisions the way the law works and that is going to be up to individual decisions.”

“I think the governor’s own words really speak to it,” added Jon Becker, an associate professor of educational leadership at Virginia Commonwealth University. “He’s said he doesn’t have the power to tell local school divisions that they can’t mandate masks. Virginia has a long history of local control, especially in education, so this type of executive authority is antithetical to how we’ve operated for a very long time.”

Kate Masters is a reporter for virginiamercury.com