Yet More Confusing Charter School Talk from Bernie Sanders: What Is a ‘Private Charter’ Anyway? 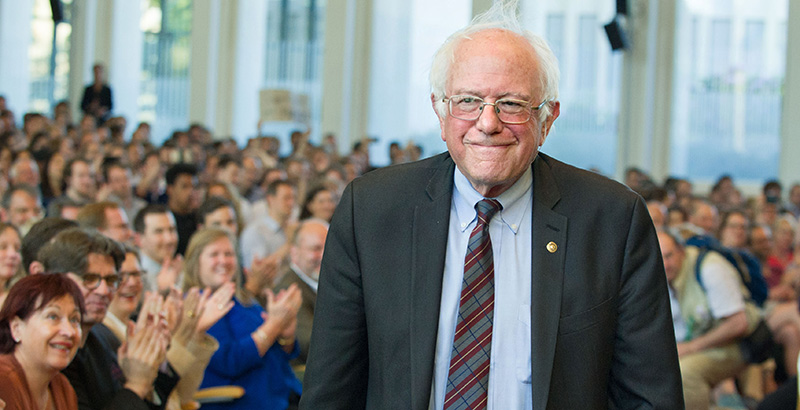 Vermont Sen. Bernie Sanders said Sunday that he supports public charter schools, though his answer seemed to confuse the issue.
“I believe in public education, and I believe in public charter schools. I do not believe in privately controlled charter schools,” he said at a CNN Town Hall in Ohio.
Sanders’ answer on charters is unclear because most charters are privately run but publicly funded and open to all students. He didn’t clarify his position, but there are distinctions to be made among what type of entity authorizes and oversees charters (local school boards, independent charter authorization boards, etc.) and between the status of charter operators (nonprofit vs. for-profit.)
The muddled answer came in response to a question from KIPP Columbus administrator Caitlynn Dunn, who cited a recent Columbus Dispatch article that said six of the state’s top 10 schools are in Columbus and of those, two (one-third) are charters. She asked if Sanders supported charters as a viable way to improve education outcomes for kids of color.
The comments are similar to ones he made to Martin and other journalists earlier this month ahead of the Super Tuesday contests, when he also said he does not support privately controlled charters. (The 74: #WhichBernie Supports School Choice? Inside Sanders’ Super Tuesday Pivot on Charter Schools)
Sanders said he supports school innovation and after a long pause, some moments of  confusion and prompting from moderator Roland Martin, cited magnet schools, which are public schools that offer specialized curriculum meant to draw students across neighborhood lines.
Vermont does not have charter schools. Sanders said he supports the school innovations underway in his home town of Burlington. Several years ago, city officials turned two of the worst-performing schools with the neediest students into magnet campuses, and they began thriving, The Atlantic reported in 2013.
“I support experimentation, but I do not want to see money leave the public schools,” Sanders said.
Martin also asked Sanders about school vouchers, noting that public funds go to private colleges through grants and government-backed loans so why not to exercise school choice in K-12. Sanders was clear that he opposes using public funds to send children to private schools.
“The difference is that right now public schools all over this country are being de-funded, and money is leaving the public school system,” Sanders said. He said neighborhood schools, where students from all economic backgrounds come together, “is one of the reasons that we created the kind of great nation that we have.”
Public schools in many places are not socioeconomic melting pots, however. For the first time, most public school students in America are racial minorities and more than half are low income. Those students are much more likely to be in highly segregated schools.
Discussion of K-12 education in this election cycle has been, charitably, limited and surface-level. Republicans have muddied the waters themselves with statements about the Common Core and the federal government that begged for a fact check. Sanders and, more visibly, his chief Democratic rival, Hillary Clinton, have been dinged for their stances on charter schools.
Clinton at a Town Hall event in November hosted by Martin said she had long supported charters, but that charters often don’t take the hardest to teach kids or, if they do, don’t keep those students enrolled.
The reaction from the education reform world was swift, and Clinton’s campaign rushed to clarify that yes, she does support charters and has for many years.
Clinton was not asked about charters or K-12 education at the Ohio Town Hall, but did say the country needs to replace the school-to-prison pipeline with a cradle-to-college system.
Submit a Letter to the Editor
March 14, 2016