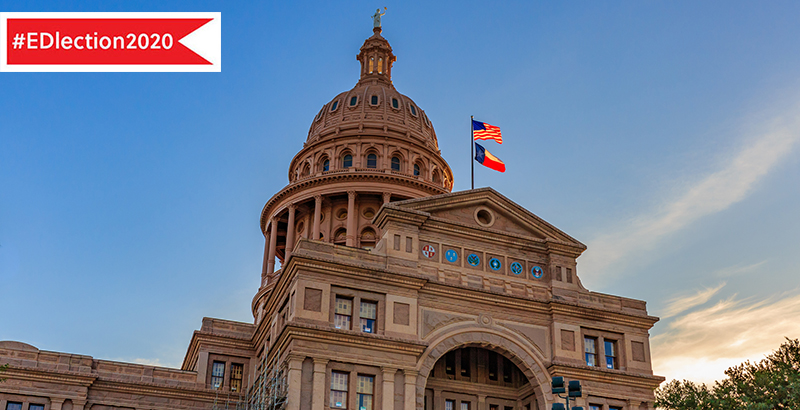 The first: For the last 18 years, Republicans have had an iron grip on Texas politics. Republicans have occupied the governor’s mansion since 1995, when George W. Bush ousted Ann Richards, and dominated the state Senate since 1997. They have controlled the House of Representatives since 2003.

They have talked a lot about school vouchers, introducing dozens of bills. But in all that time, private school choice has gone nowhere. The measures usually die at the hands of House Republicans who, in 2019, the last time the Texas legislature was in session, told the governor and their colleagues in the Senate not to bother with another voucher bill.

The second: In part because public education was a marquee topic in Texas’s 2018 election, Democrats are within striking distance of retaking control of the state House in November. Thank — or blame — #RedForEd teacher protests, Beto O’Rourke’s senate campaign trail exhortations for higher teacher pay and a long-awaited overhaul of the state’s school finance system in the last legislative session.

But if, having tapped voter frustration with public education to drive turnout, Democrats win the nine seats they need to control the House, there’s little chance they can maneuver those issues onto the agenda when the 2021 session begins in January, poll watchers and education advocates say.

Welcome to Texas. You can go ahead and forget what you think you know about the politics of K-12. Here, the governor and the Senate matter, but not as much as the House. And when it comes to education, the views of the state representatives who comprise the lower chamber depend more on geography than partisan affiliation.

In many statehouses, education policy cleaves neatly down a well-defined aisle, with Democrats on one side decrying the underfunding of K-12 education and on the other their GOP counterparts insisting that schools should be more accountable for the money they have.

The divide in Texas is geographic, by contrast. “The way that I would think about it is, Texas is both an incredibly urban and an incredibly rural state,” says Josh Blank, research director of the University of Texas at Austin’s Texas Politics Project.

The state is home to five of the 13 largest U.S. cities, as well as vast spaces losing population to the urban centers. The 150 members of the House each represents fewer than 200,000 people, while the 31 state senators each represent more than 1 million.

Rural lawmakers tend to be protective of their traditional school districts, which, in addition to being the heart of a small community, are often its largest employer. Charter schools and vouchers, many believe, would only weaken their local district.

“Lots of places are not mineral-rich or resource-rich,” says Seth Rau, the senior manager of policy at Empower Schools and a former district lobbyist. “In a lot of places, the district is what keeps the community on the map.”

This urban-rural divide also complicates the political landscape when it comes to public charter schools. A lawmaker’s political affiliation is less likely to influence the level of support for the expansion of Texas’ charter sector than concern that new schools will pose an existential threat — especially in an area where the population is shrinking.

To this, add the fact that the Texas legislature meets only every other year, and for just 140 days. Major agenda items are often discussed in the off year, with the goal of ensuring that the measures the House speaker backs enjoy broad support when the session is underway.

“The speaker is elected by members to prevent bad votes from taking place,” says Blank. Because this inevitably requires coalition-building, the last speaker, Rep. Dennis Bonnen of Angleton, nominated both Democrats and Republicans to head committees.

In 2011, after the last recession, the legislature slashed $5 billion in state school funding — the largest cuts to public education since World War II, according to The New York Times. The cuts, needed to meet the state Constitution’s balanced-budget requirement, would have been more dramatic without federal stimulus funds.

The lawmakers who attempted to restore the aid after the economy rebounded were met with quid-pro-quo demands from the governor and lieutenant governor, who serves as the Senate president. If House members wanted to relieve financial pressure on schools in their districts, they would have to agree to curtail transgender rights, to arm teachers or to fund vouchers.

As the cuts went unrestored, the share of school funding that came from property taxes rose, infuriating voters who struggled to understand why both their tax bills and class sizes kept increasing. Coupled with a sharp rise in new Democratic voters in cities, near-constant attention by O’Rourke and a campaign by teachers unions against Lt. Gov. Dan Patrick, popular frustrations boiled over.

Threading the Needle on School Reform in TX Senate Race

Democrats did not break the GOP stronghold on the state, but they did narrow the electoral margins enough to send a signal to Republican leadership. “It was a warning sign that they needed to focus more on kitchen table issues and less on things like bathroom bills,” says Blank.

House leadership pushed school finance reform to the top of the 2019 agenda, where a careful series of compromises drew bipartisan support.

“For the first time in a long time, vouchers were off the table,” says Michelle Smith, vice president of policy and advocacy at Raise Your Hand Texas, a nonprofit that advocates for high-quality public schools. “In 2019, the trade was property tax relief.”

Never mind that it passed both the House and Senate unanimously and Gov. Greg Abbott signed it; critics pounced. Some called the funding unsustainable, while others complained that Texas is still among the 10 states with the lowest school funding levels.

With COVID-19, the subsequent recession and rock-bottom oil prices, the Legislature that convenes in January will be tasked with drawing up a new budget that will run from September 2021 to September 2023. Whether they can do this without resorting to the kinds of cuts they made in 2011 depends on a host of factors, including the GOP’s historic reluctance to tap either of two hefty reserve funds.

“The House is going to shape those cuts,” says Blank. “And Democrats are going to be reluctant, especially given that the pandemic has exposed gaps in child care, etc.

There is a possibility the budget problems won’t be as deep as feared, Rau suggests. If Congress approves new federal stimulus funds, like the money sent to states in 2011, it could mean $7 billion for Texas, potentially allowing lawmakers to leave the education budget intact. But President Donald Trump has said he doesn’t want to “bail out” states, and U.S. Senate leaders seem reluctant to move forward with a stimulus package before the election.

Also complicating things is that Texas is due to redraw its political maps next year, and with much of the state’s explosive population growth consisting of Latinos, the high-stakes redistricting is expected to be contentious.

There is one more way November’s election could impact K-12 education in Texas. Starlee Coleman, CEO of the Texas Charter Schools Association, says that right now, 78 House seats are held by members she considers friendly to charters. Twenty are in play in the upcoming election.

“Every single Black and Latino pro-charter Democrat was primaried from the left this year,” she says. She believes it’s a litmus test — one the charter school community will need to confront if Texas is to become increasingly Democratic.