Would You Be My Friend? How Buddy Benches Are Helping Lonely Kids Find Playmates at Recess 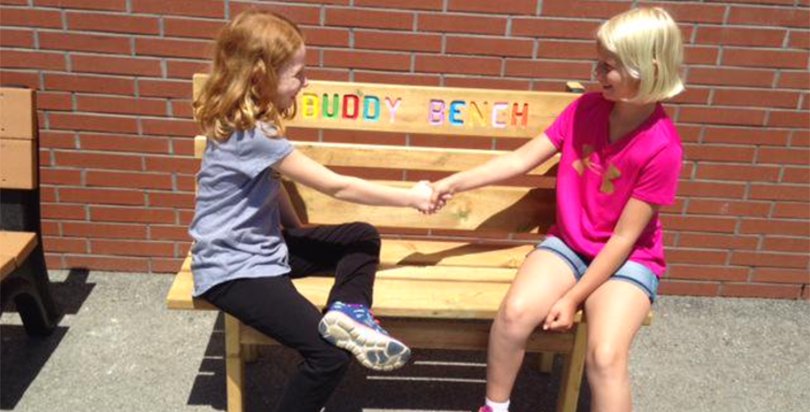 Life at school can be tough. It can be a lot tougher without friends. But Star Hill Elementary School in Dover, Del., has a solution — a Buddy Bench in the playground.

Mackenzie Reynolds, a second-grader at the school, told the Delaware State News, “If you don’t have a friend to play with, you can go sit on the Buddy Bench and someone will come to ask you if you want to play with them. After I sat on the bench, someone came over and asked me to play. We swung on the swing set and we walked and talked.”

Looking for a friend? Have a seat on the Buddy Bench https://t.co/GrVC7lZo3s

First-grader Audriana Crockett said she keeps a keen eye on the bench, watching for someone sitting all alone. “A few days ago a girl named Carmen sat on it. She was so sad. I went over to her, because I saw her first, and asked her if she wanted to play. She said yes, and we had fun together.”

That’s just what Parent Teacher Organization President Shannon Hardee had in mind after seeing a video of kids using a Buddy Bench at another school.

Her group asked community members to donate wood, paint and labor, and then it gave the finished bench to the school district.

So excited for students to use our new #buddybench Mrs. Garvin did an amazing job! #mnesrocks pic.twitter.com/L4xtfxnUtG

One key, Hardee told the News, was having all the students dip fingers in paint and place them on the bench so they could take ownership. “It’s a great way to get the kids thinking about spreading their generosity,” she said.

And it works: No one, said Principal Nicole Kurz-McDowell, remains on the bench for long: “The kids are very cognizant — they’re always watching to see if someone sits on the bench.”