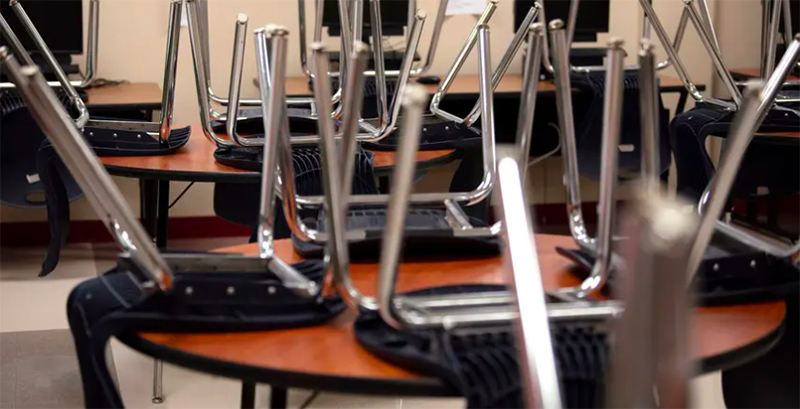 The state’s funding for schools is based on attendance, whether students are learning in classrooms or, in response to the pandemic this fall, tuning in at home from their computers or phones. Knowing that the transition to remote learning has been difficult for many schools and students, Texas had already agreed to fund school districts for the first 12 weeks of school based on their projected attendance numbers.

For most districts, the six-week extension added to the initial 12 weeks will cover the entire first semester.

As economic instability and evictions persist in some regions of the state, administrators and teachers are still calling parent cellphones, knocking on doors and scouring neighborhoods in search of thousands of missing students. The six-week extension “provides time for the enrollment picture to become more stable, so that schools can wait to make operational and budget adjustments based upon clearer information,” according to a statement from the Texas Education Agency.

To receive the extension, school districts must offer in-person instruction to all students whose parents who want it. They must also continue trying to find students who are missing from their enrollment data. The TEA will consider extending the financial grace period further before January.

Superintendents and advocates say the extension is a good first step, but they hope relief will continue through the rest of the academic year. Houston-area Alief ISD has experienced a 7.5 percent decrease in enrollment — about 3,400 students — mostly in pre-K and kindergarten, according to Superintendent HD Chambers. Many of those students are lost. “We have over 100 volunteers that are literally going door to door to the addresses that we believe, based on our data of students, should be enrolled in school,” he said.

School superintendents, especially those in urban and suburban areas competing with nearby school districts, budget for enrollment declines each year, expecting students to leave for other districts or charter schools. But the pandemic has upended normal expectations, leaving school administrators nervously checking their budgets.

About 1 million of the state’s 5.5 million public school students are learning in person, according to a TEA calculation. But the vast majority are staying home, sometimes struggling to access reliable internet connections or sharing devices with multiple siblings. Last year, state data showed that more than 10 percent of students, especially Black and Hispanic ones, were not engaged with online schooling after school buildings closed during the pandemic. Other parents have chosen this fall to homeschool their children or enroll them in smaller child care centers and private schools.

In response to the TEA’s announcement, the Association of Texas Professional Educators criticized state officials for tying “much-needed funding to being open for 100 percent in-person education,” a decision it said is best left to health officials.

The Texas School Alliance, which represents districts educating about 40 percent of the state’s students, sent a letter to lawmakers this week asking for the financial grace period to be extended through the entire academic year. School districts, the letter reads, are experiencing decreases in enrollment ranging from 2 percent to 7 percent going into October.

“The unanticipated enrollment decline is resulting in significant losses in state funding for the 2020-21 school year and the loss of enrollment is not projected to significantly improve in the coming months,” it reads. Schools must still pay for staff, facilities and other fixed costs this year, and less money might force staff cuts at the end of the academic year.

And educators are concerned that with the end of the pandemic nowhere in sight, some students could be lost forever. “I’m concerned about the number of students that are unschooled right now, that people are making decisions to wait and see what happens,” said Curtis Culwell, executive director of the Texas School Alliance.

Richardson ISD in north Texas had about 2,100 fewer students in mid-September compared with the same time last year, Assistant Superintendent Brenda Payne told school board members last month. The decrease could have major financial impacts for the district without further action from the state, board members said.

Some of the biggest decreases have been in pre-K, kindergarten and fifth and ninth grades, when students usually begin new schools, she said. Some of the younger students may have enrolled in private schools or child care centers or are being homeschooled.

“We were kind of hearing the buzz that parents were making the decision to potentially not bring their kids to school, to not start in this environment, and it’s proven to be true,” Payne said. Bilingual students have also left the district in higher numbers, but it’s unclear exactly why, she said.

Board members and educators have been concerned about where those students have gone. Administrators began calling parents and visiting their homes in March when teachers noticed students were not consistently logging on or completing assignments, Payne said.

In some cases, administrators have knocked on lost students’ doors every single day. “We want to make sure you live in our ISD, and if you live in our ISD, we want to find you and we want to bring you to school,” Payne said. “We are hearing some pretty sad stories. There are some reasons kids are sitting at home, and they need us to find them, and they need us to bring them back and to provide them resources.”

Aliyya Swaby is the public education reporter at the Texas Tribune, the only member-supported, digital-first, nonpartisan media organization that informs Texans about public policy, politics, government and statewide issues.

Aliyya Swaby is the public education reporter at the Texas Tribune, the only member-supported, digital-first, nonpartisan media organization that informs Texans about public policy, politics, government and statewide issues