With Eye Toward Trump, King Urges Advocates to Stand Together for Public Education 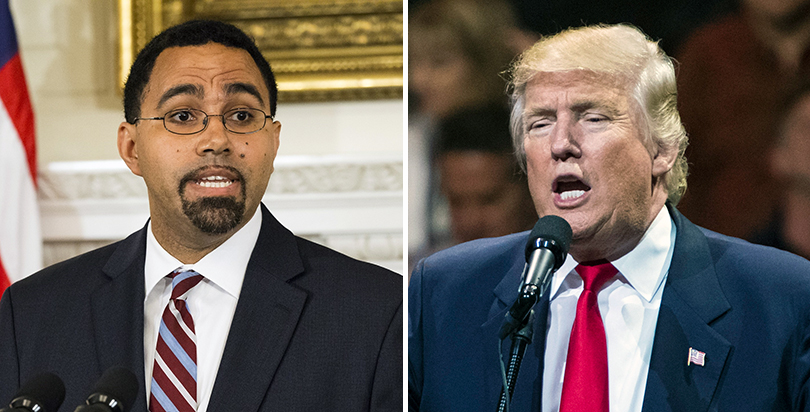 Education Secretary John King on Wednesday called for unity among “advocates for public education” in a pointed speech that seemed aimed at rallying liberal groups against ideas advocated by the incoming Trump administration.

“For all who believe that strong, equitable public education is central to a healthy democracy and a thriving economy, now is the moment for us to set aside the policy differences that we have let divide us and move forward together courageously to defend and extend this fundamental American institution,” King said in the last public speech of his tenure.

The speech, just over five weeks before President-elect Donald Trump’s inauguration, came as politicians, advocates and ordinary citizens of both parties have been taking stock of the president-elect’s positions and calculating on which issues, and to what extent, they can cooperate with his administration.
(The 74: Analysis – How Betsy DeVos Could Scramble the Ideology and Politics of Education Reform)

Shavar Jeffries, president of Democrats for Education Reform, said his group is “very interested in working with the administration where we can, to expand opportunity to kids,” but remains concerned about many of Trump's “relentlessly divisive and relentlessly bigoted” campaign promises.

“These are basic issues of decency and basic issues, frankly, of integrity,” Jeffries said of proposals like building a wall on the Mexican border, ending health insurance under the Affordable Care Act or registering American Muslims with the FBI. “We would stand in unison against those type of efforts” with groups DFER might otherwise disagree with, he said.

King, speaking at the liberal Center for American Progress, did not explicitly reference Trump, Education Secretary–designate Betsy DeVos or any of the school-choice policies they have advocated. Nor did he answer a specific question about whether he agreed that DeVos would not “protect public schools,” as some have charged.

But his repeated references to public education and explicit calls to “stay vigilant” on civil rights in education seemed to refute themes that many saw as implicit in Trump’s campaign.

King, for example, said, “We must continue to press on, firm in the knowledge that when we pull others up, they do not pull us down. When the light of opportunity shines on those who lack it, it does not dim for those already in its glow.”

Some critics interpreted Trump’s “Make America Great Again” slogan as a call to return to a time when the rights of traditionally marginalized groups like people of color, LGBT Americans, immigrants and women were limited. In their eyes, the slogan meant that the more recent ascendancy of some groups necessarily meant the subordination of those who had held power.

In contrast, President Obama’s Education Department has, through its Office for Civil Rights, focused on issues like ending racial disparities in school discipline, providing appropriate facilities access for transgender students and ensuring access to public schools for undocumented immigrant children.

(The 74: DeVos Poised to Take Over Ed Department as Civil Rights Complaints Surge and Advocates Worry)

“The president has articulated from the beginning a vision of education that is about equity and opportunity for all kids, and we’re going to need to be vigilant about that, making sure the next administration, the next Congress, protect the interest of our students” who are English-language learners, undocumented immigrants or LGBT, King said during a question-and-answer session following the speech.

“I don’t know what the next administration will do, but if you look historically at previous administrations that have not been sufficiently aggressive on civil rights protections, it was advocates insisting [on better enforcement] … that helped embarrass, at times, prior administrations into doing the right thing. We’ve got to stay active,” he said.

Greg Richmond, president of the National Association of Charter School Authorizers, said it is “not terribly helpful” to game out consequences of the new administration and rally troops in a partisan way. “We’re willing to work with anyone, on the left or on the right, to create more good schools for kids and taxpayers,” he said.

However, King’s call for unity will likely appeal to Democratic and liberal groups that have held vastly different opinions on issues such as charter schools but could well align themselves against GOP efforts to expand private-school choice or limit civil rights advocacy.

Already, teachers unions and civil rights groups, which had been at odds over some accountability and funding measures in the new Every Student Succeeds Act, jointly signed a letter raising concerns over DeVos’s past support for school vouchers and anti-LGBT organizations.

King, however, went further, urging “advocates of public education” to find a middle ground on testing and accountability and on charter schools — issues that have most visibly divided education reform groups and the unions and would be much larger hurdles to overcome.

(The 74: Cory Booker Has ‘Serious Early Concerns’ About Nomination of DeVos as Education Secretary)

“I am not saying that we’re going to agree on every tactic or every strategy…. [But] we can stop questioning our allies’ intentions,” King said.

On testing and its place in school accountability, he called for a “balance,” using “only the highest-quality assessments” that show students’ critical thinking, creativity and problem-solving, rather than rote memorization. Those tests should be part of a “rich and varied” accountability system, he said.

He also urged allies to “resist a false choice between allowing public charter schools and supporting traditional district public schools. Our primary concern shouldn’t be the management structure of schools; it should be whether schools serve all students well.”

“It would be naive to ignore that diverse views exist as to how we support public education for all students, but these varying perspectives stem from the same place of concern, support and resolution,” she told The 74. “As our country ushers in a new administration, and in many ways a new landscape, it’s important that public schools come together to stand for students in all ways — whether that’s sharing ideas among charter and district schools or ensuring that all students enjoy a safe learning environment when they walk through their school’s doors.”

King called for charter school supporters to demand that charter authorizers set a higher bar for their schools, and also for strong monitoring and turnaround efforts at traditional public schools.

He also called for an end to the “false dichotomy” that teachers are praised as the only solution to the country’s educational woes or criticized for failing to solve them single-handedly.

In the end, King said, everyone must be part of the solution.

“We may disagree about tactics and strategies, but, as advocates of public education, we cannot afford to disagree about the need to make choices that reflect the best interests of students and to push ahead bravely,” he said.