Winters: When It Comes to School Quality in Your City, from New York to Dallas to Anchorage, Mind the Performance Gap 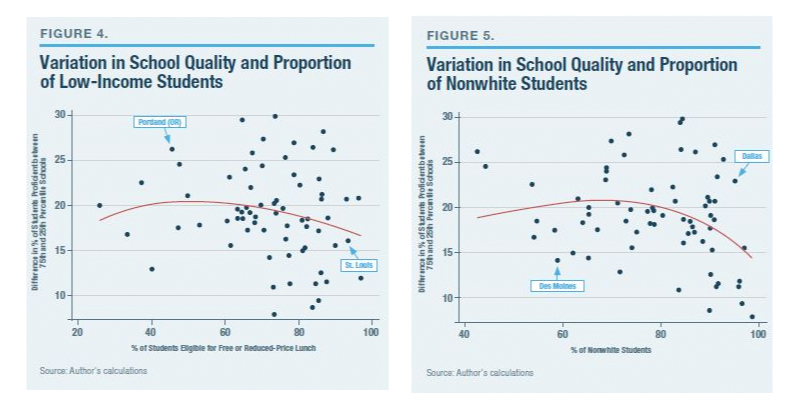 Every parent knows that school quality and student performance can vary widely in any given city. That’s why families look closely at the school quality in the neighborhoods they’re considering when they’re planning to move.

What’s less understood is how cities across the country rank in terms of providing consistently good public schools and educational opportunities for all children who attend them, regardless of neighborhood.

As an education policy expert, I was curious to find out just how big the difference is between a metro area’s most and least effective public schools. I did this by gathering data from 68 of the largest districts in the country — from New York to Los Angeles, Dallas to Anchorage — which collectively serve about 7.8 million students.

What I discovered is both depressing, for those parents stuck in metro areas where the quality of schools is consistently low or where the gap is greatest between the best and worst schools; and hopeful, in that if we examine areas where schools are consistently high-quality, with little variation between top and bottom student performance, we may better understand how to help all students.

Sadly, there are also cities like Detroit; Rochester, New York; and Birmingham, Alabama, where the public schools perform at a consistently low level with relatively little variation.

Why is there a bigger difference between the best and worst schools in some cities than in others? There’s no simple explanation. Average school performance doesn’t explain it. Nor does the number of schools in the city or the percentage of students who are nonwhite or low-income.

Why is this so? First, as I point out in my report, cities that do not equally distribute such students might also inequitably allocate resources between schools — directly, via spending per pupil, and indirectly, via, say, uneven distribution of the best and worst teachers.

Second, low-income students who attend schools with heavier concentrations of higher-income students often have access to more high-performing peers as well as better-qualified teachers, which can have a positive impact on academic outcomes.

Yet other, less understood, factors specific to a certain city also help to explain the outliers. For example, of all the metro areas I studied, New York City has the largest spread between the most and least effective schools. What accounts for this? One possible explanation is that some public schools have test-in or other enrollment requirements that cluster students by ability, which can affect the level of instruction.

The lack of a simple explanation for variation in urban school quality means we also lack a simple solution. The purpose of my study is to quantify the issue and introduce it into the discussion. Policymakers in cities where public school quality is especially unequal should investigate what is leading some of their schools to excel while others fail.

That said, as for the relationship between variation in school quality and a district’s proportion of students who are low-income or nonwhite, no strong correlation exists. However, cities where low-income and nonwhite students are more heavily concentrated within particular schools do exhibit a larger variation in school quality. These include places like Minneapolis, Denver and Portland, Oregon.

In short, few of America’s largest public-school districts offer consistently decent elementary and middle schools. But motivated parents in low-quality districts should not despair entirely: In 29 districts (43 percent of the total), at least 40 percent of students were proficient, or better, at the 75th-percentile school. In other words, in many districts that are of low quality overall, there are pockets of decent schools.

Hopefully, policymakers and educators will learn from this study, and not only find new and innovative ways to increase student and teacher performance across the board, but also narrow the gap between the best- and worst-performing schools no matter what city or state they are in.