Williams: Together, Student Report Cards and School Report Cards Can Show Parents How Their Kids Are Really Doing in School. 5 States That Get It Right 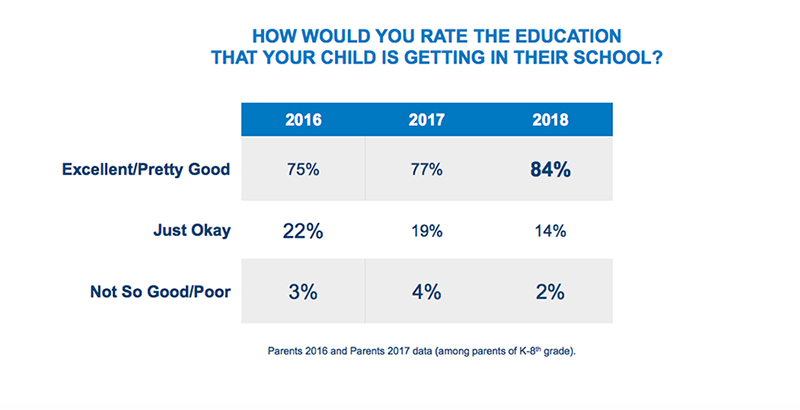 A handful of visionary state leaders in education are doing something unprecedented — prioritizing parents. It is not a minute too soon. Parents currently receive limited, piecemeal, hard-to-understand information on both how their school is performing and how their child is achieving.

When parents think their school is good and their child is fine academically, they focus their time and energy on other pressing issues. But in most places, there is a Grand Canyon-size gap between what parents are told about their children’s learning and what the school knows to be true.

To understand the scope of the problem, consider these three seemingly contradictory statements:

● Only 37 percent of fourth-graders are proficient in reading, and 40 percent in math.

● Almost 90 percent of all parents, irrespective of race, income, geography or education level, are confident that their child is at or above grade level in reading and math.

● 84 percent of parents rate their child’s school as excellent or pretty good.

In fact, all these statements are true. And the statistics become even more heartbreaking when viewed through an equity lens: Since only 20 percent of African-American students and 23 percent of Hispanic students are proficient in fourth-grade reading, if their parents are among the 90 percent who believe their child is at or above grade level, the impact is even more egregious.

The issue is not a lack of information. Superintendents and principals have a multitude of diagnostics, such as Lexile, Quartile and MAP, that can be compared and contrasted to tell them exactly how each student is performing in math, English and, in many cases, science and social studies. But very little in our vast public education system, with the exception of the student report card, is designed for the parent. It is not uncommon for a student to be several grade levels behind and still get a B because report cards measure lots of things, from behavior and participation to effort and progress. And, in a chronically low-performing school, if the report cards are produced on a bell curve, the highest-performing student could actually be at the same level as the lowest-performing student at another school.

As important as student report cards are, in isolation, they cannot tell the whole story. Nonetheless, parents rely on them almost exclusively.

Compounding the problem is the slew of negativity around state assessments. Although these tests are a more accurate measure of grade-level performance in most states, and can provide valuable context for families, parents do not trust them as much as they do student report cards.

But there is good news, and a path forward. Five states have embraced the new federal requirement under the Every Student Succeeds Act to create easily understood school report cards as an opportunity to give parents complete, usable information about their child’s school. Awareness is the first step toward advocacy, and there is no better advocate for a child than his or her parent.

This means that something that might appear perfunctory or even bureaucratic can be, in fact, a lever for change.

As states start to roll out their new school report cards, the data will begin to appear on school websites, thanks in no small part to the hard and tireless work of the Data Quality Campaign. Historically, school performance data have been buried deep in the bowels of state Department of Education websites and contained in spreadsheets or dense reports largely undecipherable to anyone not employed by the public education system. But the campaign’s recently released report, Show Me the Data, highlights states that take the new requirement seriously and have used it as an opportunity to reimagine their school report cards — for example, prioritizing Spanish as well as English, innovative design and accessible language.

At Learning Heroes, we have engaged in a comprehensive body of research around parental mindsets and expectations, including more than 125 focus groups across 23 states. We are now partnering with state leaders to translate that research into action.

South Dakota chose not to tweak a previous state report but instead started over, designing a school report card that is truly responsive to what parents want to know and using easy-to-understand language.

Massachusetts partnered with local parent organizations to hold feedback sessions on the usability of its draft report and incorporated that information into its final school report card.

Texas included an illustrated “show me how it works” section for every indicator, to help parents understand how the data relate to one another and are calculated into the overall score.

Louisiana went above and beyond the required academic data points to include information that parents expressed interest in, such as extracurricular activities, uniform policies and music and art offerings.

The research is clear: When parents see that their child’s school does not perform well on its school report card, they don’t just get more involved; they are also more likely to question whether the student report card is an accurate reflection of their child’s achievement. Closing the parent information gap is doable. We know how to do it and have examples of states that are leading the way. It is time for our public education system to value parents as partners and give them the information they deserve.

Cindi Williams is a co-founder of Learning Heroes and a principal at HCM Strategists, leading the K-12 practice. She previously served as a senior leader at the Bill & Melinda Gates Foundation, as well as the White House and the U.S. Department of Education under President George W. Bush.

Cindi Williams is a co-founder of Learning Heroes and a principal at HCM Strategists, leading the K-12 practice. She previously served as a senior leader at the Bill & Melinda Gates Foundation, as well as the White House and the U.S. Department of Education under President George W. Bush.