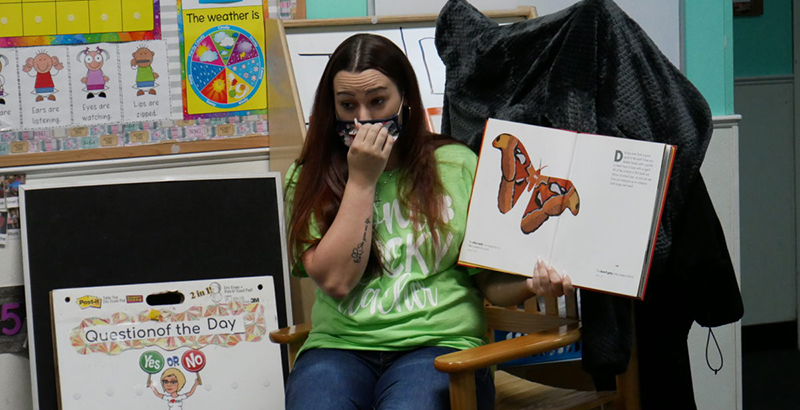 Early education providers across the state and country are struggling to find and keep teachers. That has always been the case, but the current labor market and pandemic disruptions have worsened the problem.

And the turnover in teachers is causing some providers to make sacrifices in quality.

Owens declined her own pay last month and plans to increase class sizes so she can pay teachers as much as possible.

“I’ve done everything I can to make it the best place to work, and I can’t keep them.”

Research on turnover among early childhood teachers from Louisiana and Virginia provides some context on the magnitude of the problem, but also a potential solution: Put more money in teachers’ pockets.

In Louisiana, a longitudinal study of early childhood teachers found turnover rates of 33% over a year and 67% over three years. The study in Virginia found that pay incentives totaling $1,500, spread over eight months, reduced turnover in early childhood classrooms by 11 percentage points, and cut the rate in half in child care settings.

The research was done before the pandemic, but it’s “hugely connected to current conditions and, I think, has huge implications for how we proceed,” lead researcher Daphna Bassok, associate professor of education and policy at the University of Virginia, said in a webinar last week hosted by Duke’s Center for Child and Family Policy.

In Louisiana, half of child care teachers are gone in a year

“These are very striking turnover rates,” Bassok said. For comparison, average K-12 turnover rates are between 10% and 20% in a year, she said.

“These (findings) have negative implications for kids, but they also have implications for our investments in providing high-quality early education in general and make it very difficult to offer families reliable care,” Bassok said. “And again, all of this is pre-pandemic… It’s only sort of gotten worse in the more recent period. So that led us to a lot of questions around like, OK, we know it’s bad, and how do we start addressing it?”

In Virginia, a small pay increase made a big difference

Through a federal Preschool Development Grant, Bassok was able to start to answer that question in Virginia. In one large urban county, the research team randomized early childhood sites, giving teachers in one group $1,500 in three payments over eight months. The control group continued to receive normal wages.

As in the Louisiana data, multiple kinds of settings were included in the research — Head Start, pre-K, child care, and home-based settings. Yet again, there was wide variation across settings.

The financial incentives did not make a difference for the school-based pre-K teachers. But for child care teachers, turnover was cut in half. In the control group, 30% of teachers had left after eight months. In the group receiving the payments, 15% of teachers left.

The financial incentives made the biggest difference for assistant teachers, whose rate of departure fell by 24 percentage points.

The majority of teachers said in surveys that they spent the money for such basic necessities as bills, food, and housing. The second most common response was paying off debt.

The $1,500 payments translate to about a 75-cent wage increase. In North Carolina, the 2019 median wage for child care workers was $10.62 an hour, compared with $12.83 for preschool teachers and $27.89 for kindergarten teachers, according to a report from the Center for the Study of Child Care Employment.

In Monroe, Owens said, a small difference could go a long way. Her teachers often rely on government assistance programs for food and housing.

“I think a lot of people who make the laws and the standards don’t realize what level folks are living,” Owens said.

Owens said she wishes her county, Union County, was participating in WAGE$, a wage supplement program run by the Child Care Services Association (CCSA) that reaches early education professionals in 58 North Carolina counties. The program is funded by Smart Start partnerships and the Division of Child Development and Early Education.

The program has never had the resources to conduct the kind of study Bassok’s team ran in Virginia, said Marsha Basloe, CCSA’s president. But there is reason to believe the program is having a similar impact. Within the sites receiving supplements last year, the turnover rate was 12%.

Early childhood advocates, including Basloe, were hoping for funds to expand the WAGE$ program to all 100 counties in the state budget, which is still under negotiation. The House’s version of the budget included $35 million for the program out of $503 million in American Rescue Plan (ARP) relief funds “with the intent that, upon full implementation, access to the program shall be statewide and available in every county.”

The Senate’s budget proposal did not include the program in its ARP allocation, while Gov. Roy Cooper’s plan included $36 million for the program and a little over $9 million to raise compensation for pre-K teachers working in private child care settings.

“I’m hoping that will happen,” Owens said. “That will help my teachers; it’s such an encouragement… You get it twice a year and they can either make a car payment or, you know, pay a bill that they’ve been needing to pay.”

Basloe said she often hears about providers using the program as a recruiting tool. Though she said serious public investment will be needed to solve long-term workforce issues, the supplements help in the meantime.

“It’s what’s keeping some people in the field,” Basloe said.

This article originally appeared at EdNC.org

Liz Bell is the early childhood reporter for EducationNC.