Donald Trump has done it again. Just a few months ago, nobody expected the bombastic businessman would sweep the Nevada Republican caucuses. But that’s what happened on Tuesday.

Then — in typical Trump fashion — his victory speech made Twitter erupt in fury Wednesday after he declared his love for the “poorly educated.”

I LOVE THE POORLY EDUCATED
Your GOP front runner everyone. If this doesn't make you ? the direction of this country https://t.co/55r8sqCP8S

"I love the poorly educated" may be the most on-the-nose pander that's ever been pandered.

In a lot of ways, Trump’s hat tip to “poorly educated” voters makes a lot of sense. In December, FiveThirtyEight analysed the data from three national surveys and determined Trump’s lead over other candidates in the GOP field relies heavily on Americans without college degrees. In fact, Trump had a double-digit lead among voters without college degrees. Of the survey respondents who had received a college degree, Trump’s appeal was similar to that of Ted Cruz and Marco Rubio. 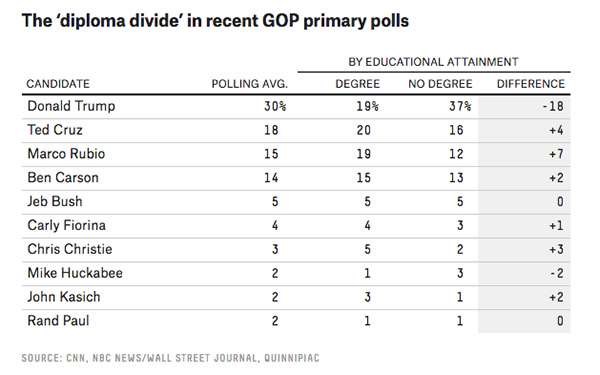 Source: FiveThirtyEight
So far, substantive education policy has been largely absent from Trump’s talking points — like pretty much all the other candidates on both ends of the political divide. (Read The 74: And Then There Were Seven: What We Know About Every Candidate’s Education Agenda)
American voters have always been uneasy with presidential candidates that come off as overly intellectual but we are also fond of being Number 1 in the world — or we used to be.
According to the most recent scores from the Program for International Student Assessment, American 15-year-olds ranked below average in math among the countries that participate in the test. American students’ scores in reading and science were about average on the test, which was conducted in 2012.
As one Twitter user noted, Trumps remarks are “the drop-the-mic ending to America’s superpower status.”

"I love the poorly educated" is the drop-the-mic ending to America's superpower status. https://t.co/xuU6F3xgI7

Others saw a marketing opportunity.