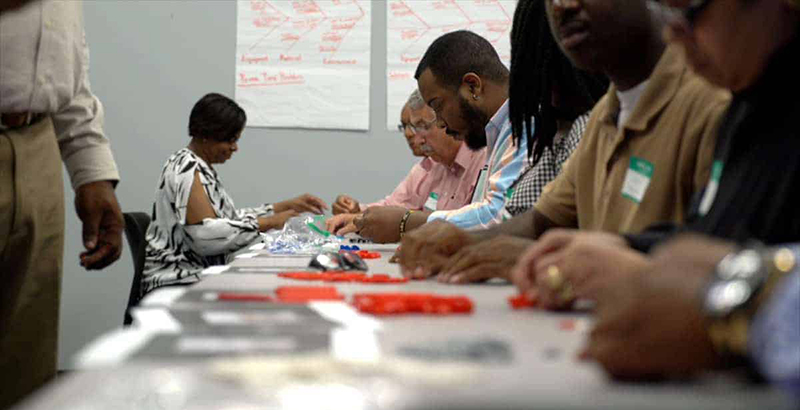 If North Carolina community colleges are going to boost enrollment, and if the state is going to meet its attainment goal of credentialing 2 million North Carolinians by 2030, adult learners will need to be part of the equation.

Adult learners are categorized as students over the age of 25.

“Adult learners have different needs than … our traditional students coming straight out of high school,” said Lawrence Rouse, president of Pitt Community College. “They need what I call wrap-around services.”

Those services can include everything from help with transportation to childcare, food, and clothing.

And because the age ranges, needs, and life experiences of an adult learner vary, postsecondary institutions will need to reimagine their business and education models to meet the needs of students older than 25.

One effort to do so is underway in North Carolina.

In June 2021, the John M Belk Endowment, myFutureNC, and the Belk Center for Community College Leadership and Research announced a pilot project and outreach campaign to engage and enroll adult learners.

To better understand how these five community colleges used this initiative to make changes across their campuses, EdNC, along with the Belk Center for Community College Leadership and Research, interviewed presidents, staff, and students at each of the pilot schools.

Recruiting and communicating with adult learners

Unlike high school students, adult learners are in different locations, and colleges may not know they are interested in attending until the adult learner initiates communication.

Working with InsideTrack, each of the five colleges identified students who had started a degree, diploma, or certificate at their institution but never completed it.

InsideTrack is a member of the nonprofit Strada Education Network and partners with colleges and universities to improve enrollment, persistence, and career readiness. During this campaign, InsideTrack reached out to the previously enrolled students at each of the five colleges using text, phone, and email.

Laura Leatherwood, president of Blue Ridge Community College, said Blue Ridge identified students who had left the institution no more than five years ago and who had completed at least 50% of their credential.

The institutions shared that when it comes to reaching adult learners, choosing the right recruiting and marketing strategies can prove difficult, particularly when adult learners say different types of communication helped them make their decision to return to school.

“We need to make sure that we’re communicating in a way that’s right for our community,” said Vance-Granville Community College president Rachel Desmarais.

Vance-Granville serves Vance, Granville, Franklin, and Warren counties. According to Desmarais, print and radio still work as recruiting tools in those counties. In many cases, older individuals who read the newspaper are telling younger people in their homes about opportunities at Vance-Granville.

Staff at each college discussed the importance of being in the community and creating partnerships. From attending baseball games to participating in food drives to hosting trivia nights, being present in the community they serve is critical.

“I will sometimes see my old students at the gym. And they will say, ‘Oh, Mr. Blake, I know you’re riding that bike, but can you talk … to my friend. I want him to take a welding class,’” said Blake Williams, success coach coordinator at Durham Technical Community College.

Responding in a timely manner to student inquiries is also critical, staff said.

“Any individual who is engaged with a potential student or returning student…[needs] to be well versed in the work that we’re doing overall. It can’t be compartmentalized,” said Abraham Dones, assistant dean and registrar at Durham Tech.

Staff also emphasized the need for a strategic communication plan during the initial recruitment phase and beyond.

Fayetteville Technical Community College is in the process of implementing a customer relationship management (CRM) tool that will send personalized messages to students and track where students are in the admissions process. The CRM can be customized, allowing for segmentation between different audiences, and it is automated.

But you don’t need a CRM to segment audiences.

As Durham Tech president JB Buxton said, “This initiative gave us a chance to address a population that we knew was interested in what Durham Tech had to offer, but we didn’t always talk to in a targeted way.”

Buxton said a lot of their marketing felt like it was for recent high school graduates, and while it was good marketing, he didn’t feel as if the college was speaking with a very united voice to adults.

“We are more connected than we’ve ever been in history. However, we are harder to get ahold of, and it’s harder to market because people don’t have all those normal avenues that we used in the past,” said Lyons.

Community colleges have historically been structured in a way that represents the college experiences of their leaders, which is often a traditional college model.

While community colleges have trained and educated adult learners for years, their operating models do not often reflect the student population they serve and are trying to reach.

“We need to change our hours of operation,” said Desmarais, giving one example of how colleges can adapt to better serve adult learners who may only be able to engage with the college at night and on weekends.

But operating hours aren’t the only problem. For many students, navigating the college during the admissions process is a pain point. Whether it be physically navigating the campus or having to connect with multiple offices, students can often feel overwhelmed.

To alleviate some of this, Pitt Community College has plans to launch an Adult Center. It will be a centralized location where adult learners can find support and resources in one place. The center will also house staff who have been trained to counsel adult learners, said Rouse.

At Blue Ridge Community College, adult learners were given a branded backpack filled with items they will need throughout their college journey.

During our student interviews, almost every student said it would be good to have a refresher of the resources the college offers at different points in their academic career. Students described being bombarded with information initially and forgetting much of it later on in the semester. One student suggested having a landing page that lists every resource the college offers in one place.

Students taking non-credit classes suggested having more information up front about credit-bearing courses that could provide a seamless transition.

Desmarais agreed. These students need guidance, she said. And her goal is to have even more non-credit to credit offerings — though she would like to do away with the term non-credit because she does not like speaking about courses and students with a deficit term.

Planning and paying for college can be a burden for many adult learners.

For students who fall into the “some college, no degree” population, finances can be a challenge.

Whether they have used all of their federal Pell grant money or have outstanding college debts, starting school with a financial burden can impact a student’s decision to return.

In an effort to reengage students, some colleges are using HERF (Higher Education Relief Funds) funds or private money to forgive small debts to help students.

Other colleges are offering free tuition.

Leatherwood ran a data scenario with a 10% enrollment increase over the next academic year. She then asked, how much money would I need to cover the tuition of every student, no matter the credential or degree?

“Then we took all the pots of money and threw them into one big pot and we asked, can we cover these students?”

And the answer was yes.

Without prompting, students discussed the impact someone from the college had on their academic career. Sometimes it was an instructor or an advisor, but the sentiment was always the same — the relationships that were built made a difference.

The intentional one-on-one relationship is key to retaining students.

Three of the five pilot schools have or plan to hire additional success coaches who are responsible for tracking and following-up with students once they are enrolled.

All of the colleges were looking at ways their advising model could be revamped to create a case-management approach to academic advising.

“If you are in a CTE program on campus, you probably have quality advising. But if you’re in college transfer, there’s a problem because most of the students get assigned an advisor that they never have in class,” Sorrells said.

Is the work worth doing?

Each college shared the fast pace at which the pilot initiative was implemented. And that it added additional work on staff who already wear multiple hats.

So we asked the staff, “Is the work worth doing?”

Bunch and others recently attended a scholarship luncheon where a former Blue Ridge student, Luke, was speaking.

When Bunch stood up to refill her water, Luke walked with her. While standing in line, he leaned over and asked Bunch if she had ever worked in the admissions office.

And that’s when the student told her he remembered her. He had called one day with an issue and Bunch worked with him over the phone, helping him stay in his classes. It meant a lot to him.

“That story is exactly why we do what we do,” said Bunch. “So you asked, ‘Is it worth doing?’”

“One Luke is worth what we are doing.”

In the next article of our adult learner series, you will hear from Mike Krause, former executive director of Tennessee’s Higher Education Commission, on what North Carolina has to learn from Tennessee’s experience.

This article originally appeared at EdNC.org and is the second in a five-part series on adult learners at North Carolina’s community colleges. Click here to read the rest of the series. (Editor’s note: The John M Belk Endowment supports the work of EducationNC)