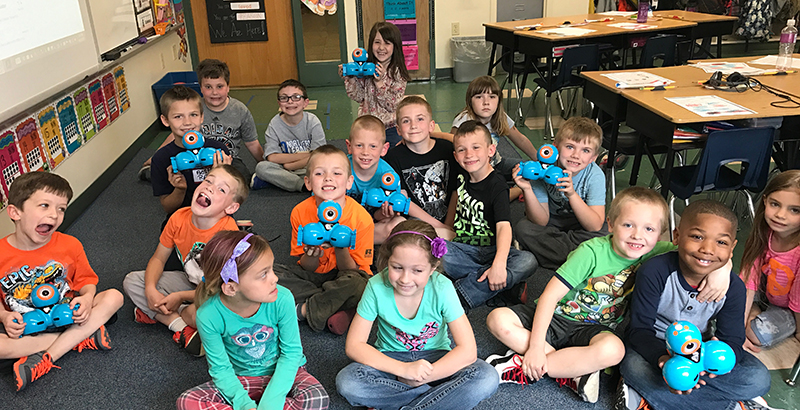 First-graders can’t do this.

That was teacher Tiffany Hogg’s first thought when her principal told the staff at Fredericksburg Elementary in southeastern Pennsylvania that the school would be participating in a one-day program teaching students how to code.

The thought didn’t last long. As Hogg walked around her classroom, helping 6- and 7-year-olds make animated characters dance across their screens, she noticed that some of her lowest-performing students were excelling. One boy, who could read only a few dozen words, looked up at her and said, “Mrs. Hogg, I can finally do this — I’m good at something!”

“It just broke my heart,” she said. “He was almost giving up on himself, and when I saw that reaction from him, I thought, ‘I really need to look into this more.’”

So Hogg drove almost two hours to New Jersey for a professional development session hosted by Code.org, where she learned more about coding and robotics. Then she set up a DonorsChoose.org fundraising account to buy robots from Wonder Workshop to teach coding and programming.

The robots have become so popular among her students that she now has a collection of seven, integrates them across content areas, and has started an afterschool program to teach coding to students in other grades.

Teachers ask to borrow Hogg’s robots, and students beg their parents to buy them robots for Christmas.

“It made them want to learn,” she said.

The excitement and energy pulsing through the school is, perhaps inadvertently, addressing an all too common problem in STEM:

“We all know about the huge diversity issues in the tech world,” said Pat Yongpradit, chief academic officer at Code.org. “Getting kids exposed early, both boys, girls, different ethnicities, what that shows them is they can do this from a young age, so that the stereotypes that ‘they don’t belong’ or ‘they can’t do this’ don’t make sense to them.”

Exposing young children to STEM skills like coding is recommended to help break down accessibility barriers. Gender stereotypes can steer girls away from STEM subjects, even though research shows they have as great an interest in the topic as their male peers in elementary school. Perhaps that’s why women are projected to hold only 1 in 5 computing jobs by 2025, according to a report from Accenture and Girls Who Code.

In Hogg’s home state of Pennsylvania, the Department of Education has been pushing to incorporate computer science throughout all grade levels. In July 2016, Act 86 allowed computer science to count as a graduation credit in math or science. “Once that took root, we knew we had to take a hard look at what teachers were teaching,” said Judd Pittman, special assistant to state Secretary of Education Pedro Rivera for STEM. “We were pretty clear that the K-5 space is a really important place to focus.”

Teacher training is the biggest hurdle, Pittman said, so Pennsylvania has offered 1,000 trainings on Code.org tools that focus on integrating coding across subject areas. To train early learners, these tools have pre-reader features, like audio and illustrated instructions, so students don’t have to be able to read to practice skills like sequences, looping, and algorithms.

Cost is also a hurdle, especially for tech tools like robots. A pair of Wonder Workshop robots costs $200, while accessories and curriculum materials can quickly ramp up the price. For Hogg, DonorsChoose.org, along with contributions from her mother and stepfather, helped cover the cost of her seven robots. Wonder Workshop now covers 10 percent of DonorsChoose.org robot purchases for any teacher with a project that qualifies.

Filling a STEM workforce is certainly a priority behind many education initiatives — Pennsylvania Gov. Tom Wolf wants to increase the number of enrolled computer science majors to 10,000 by 2020. The state predicts 71 percent of new jobs will require computer science skills.

But while educators support encouraging more students toward these jobs, this isn’t necessarily the primary goal behind teaching students to code. Hogg sees her students developing perseverance, collaboration, exposure to new vocabulary words, and exploration through play. She’s watched them write stories about the robots, solve math problems tracking how many baskets a robot can shoot, and even helped a student shy about public speaking program a bot to help verbalize part of her presentation.

Perhaps the best measure of success is the noise that radiates from Hogg’s classroom. People, she said, have commented to her about the volume, but she sees it as an indicator of student involvement.

“They are collaborating and working together and having fun when learning,” she said. “I will take that loudness every day of the week if I have my kids all engaged at the same time working on something together.”