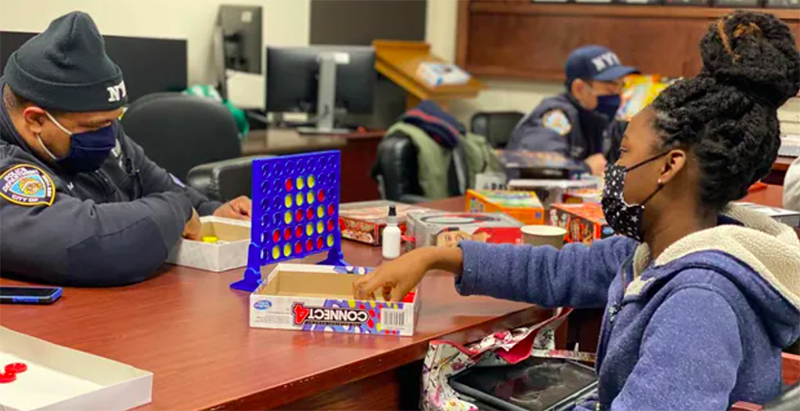 This article was originally published on Nov. 15 by THE CITY.

Last month, Mayor Bill de Blasio announced a fairly new kind of cop would be sent to city schools following a spate of violent incidents, including five guns allegedly recovered from students within a week.

The NYPD initially rolled out the “Youth Coordination Officers” program in 2020, with an early target of moving 350 cops into the role to cover the city’s 77 precincts.

The YCO division debuted as part of the department’s overall new “youth strategy,” and NYPD Commissioner Dermot Shea said the cops would focus on crime prevention by tracking teens and connecting them to social and educational services before they ever break any laws. YCOs were put in each precinct, officials said, as a first point of contact between young people and police.

“We have the information,” said Shea while unveiling the project last January. “We can identify these kids and assist them early in their downward trajectories.”

Since their debut, the youth officers’ activities — from basketball court renovations, to shooting responses, to marches, block parties and gun seizures — have been publicized across NYPD social media. For some neighborhood leaders, the program offers a welcome shift in the department’s relationship with youth.

But for other community organizers and police reformers THE CITY spoke to, the jury is still out on the effectiveness of the new YCOs. And many are wary about sending more police into schools.

Meanwhile, about one-third of the more than 90 YCOs identified by THE CITY were the subject of misconduct complaints before joining the new division, records show.

“How are they working with us? That’s a question,” said Iesha Sekou, executive director of Street Corner Resources, an anti-violence group in Harlem that’s part of the de Blasio administration’s “Cure Violence” initiative.

“Are they really working with us? Or is this just a show of like they’re doing something that may not necessarily be beneficial to the community, but it makes NYPD look good?”

When the mayor announced that the new type of cop would be assisting with school safety, police officials described it as a reinforcement effort.

“We do have a backup of our YCOs, our youth coordination officers, and our neighborhood coordination officers backfilling some of the schools where we don’t have the maximum amount of coverage of school safety agents,” NYPD Chief Rodney Harrison told reporters alongside the mayor on Oct. 26.

“So I’m optimistic that we’re doing all we can do to protect the students.”

Yet the move follows over a year of loud protests against school policing, largely led by students and their advocates, to have fewer police in schools, with some calling to end the traditional school safety agent program. 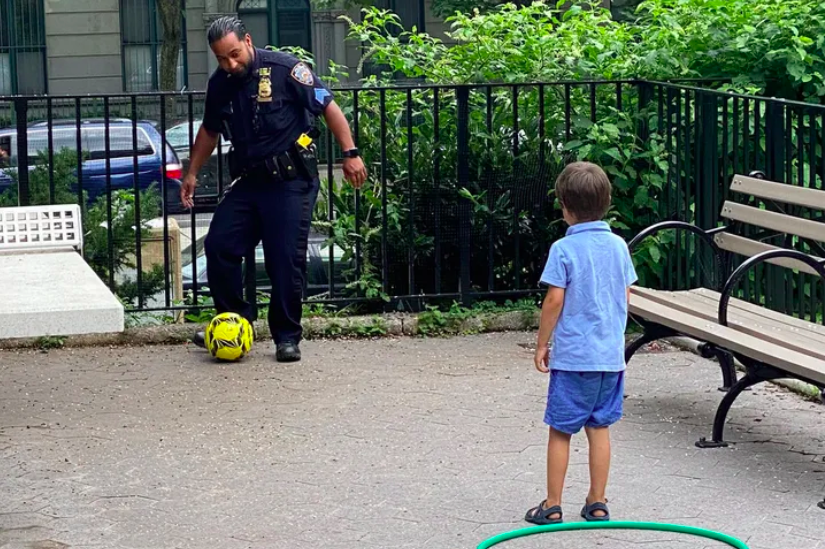 Meanwhile, neither the Mayor’s Office nor the NYPD would give any specific answers to questions from THE CITY about how many YCOs are currently employed, or how many would be sent to schools.

When not on campus, the kid cops’ duties include keeping track of young people who’ve had contact with the justice system, patrolling “areas frequented by youth” and visiting families of both alleged perpetrators and victims, in addition to making arrests and investigating crimes.

The officers also connect children to local activities for kids and create youth programs of their own, according to the department’s Patrol Guide.

In schools, “NYPD deployments will be determined based on intelligence gathered, schools that have had challenges, and schools that need an enhanced presence based on school safety agents,” said Sgt. Edward Riley, NYPD spokesperson.

Unannounced metal detector scans “will vary day-to-day,” said Riley. Schools will be chosen “based on a data analysis of recovered weapons, crimes, and overall violence both historically and also based on what crime trends,” as well as input from school safety officials and the Department of Education, he added.

Locations of new “safe corridors,” where cops secure paths between school and train and bus stops “will change routinely based upon an analysis of crime data and trending incidents,” he said.

But Gregory Floyd, the head of the school safety agent union Local 237, told THE CITY that even he was in the dark on the plans. He reiterated his call for hundreds more safety agents.

“I’ve seen no details,” said Floyd, adding that the effort “cannot make up for the [school safety agent] shortage.”

Jerry Ratcliffe, a professor of criminal justice at Temple University, noted that a force of youth officers — and cops helping out in schools — isn’t unique to New York City.

“I think this will be a success, if the NYPD puts the analytical effort into identifying the problem that they’re trying to solve,” he said. “If it’s been a thrown together response from the Mayor’s Office with not a lot of thought, then the flaws in this plan will become quite evident quickly.”

In February 2020, an NYPD spokesperson told THE CITY that the foundation of the new strategy would be “building community partnerships.”

“There are so many people and organizations in agencies across the city doing so much great work already to help kids,” the spokesperson, Al Baker, said at the time. “Our goal is to ensure the NYPD is doing all we can to contribute to that effort and to bring all of us to the same table to work together and share ideas and resources to achieve our common goal.”

City Councilmember Adrienne Adams (D-Queens) said she’ll be watching how the officers will fit into the school environment.

“I would like to see a plan and that’s been my issue,” said Adams, the chair of the Council’s Public Safety Committee.

But overall, the work that kid cops have already done in her district has been positive, she told THE CITY. The officers “really stepped up” in connecting with kids during the pandemic, said Adams, who noted the cops’ years of experience.

Some Have CCRB Records

Some of the veteran cops who joined the YCO division had been the subject of past complaints about their policing.

Of 91 youth coordination officers identified by the NYCLU and THE CITY from the NYPD’s social media accounts, 30 had at least one complaint lodged against them with the CCRB, ranging from offensive language to the use of physical force to property damage.

Allegations against at least five officers were “substantiated,” meaning the board concluded that misconduct had occurred.

Despite the substantiated allegations, two of which were for improper use of force, none received any significant disciplinary action, which as THE CITY has previously reported, is not uncommon.

Neither the NYPD nor the mayor’s office responded to requests for comment on the CCRB cases.

Some researchers warn that frequent contact with police impacts the academic performance and overall health of young people.

Last summer, THE CITY reported that Black and Hispanic youth were disproportionately likely to be victims of police misconduct, according to the Civilian Complaint Review Board.

The NYPD says the new YCO program was created, in part, to address that disparity. But not everyone is convinced.

Sekou, of Street Corner Resources, told THE CITY that she has been concerned after seeing the police use crisis management tactics in response to shootings — often right after violence interrupter groups like hers did the exact same thing.

Rev. Maurice Winley, who heads the Living Redemption Youth Opportunity Center in Harlem, said his organization has invited some YCOs to talk to members of his programs.

But, he said, when an officer shows up with a “gun on your hip” that creates a certain “power dynamic” that can be a barrier to the trust youth officers are seeking to build.

When THE CITY asked about how the NYPD trains or measures the success of YCOs, or the Youth Strategy program in general, the department would only point to its online Patrol Guide. 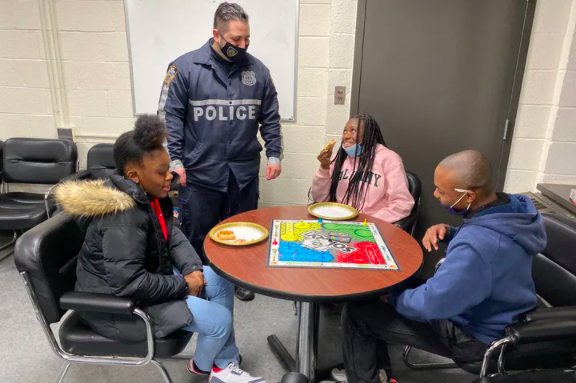 “We’ve seen this before: The NYPD identifies what it thinks is a problem and then it decides that the way to solve that problem is with more policing,’ said Miller, adding she’s also concerned about whether the cops would be gathering intelligence while ostensibly helping kids.

“We have no sense that they have any specialized training,” she told THE CITY.  “So this is a purely NYPD endeavor with no sort of even the minimal oversight of another agency that does specialize in working with young people.”

Camara Jackson, the head of Brownsville nonprofit Elite Learners Inc, lauded de Blasio for the new initiative. She said her organization, which provides athletic, educational, and mentorship programming, has enjoyed a positive relationship with local youth coordination officers, particularly over the summer.

“I just really want the NYPD to realize that we’re valuable partners in this work,” Jackson said of her own group and dozens of similar community organizations. “And as they get an expansion to go into schools, we should also get an expansion to work alongside them.”