Last week Denver released new school rankings based on the tough PARCC tests, which meant some schools got downgraded. The local press saw the story as a yawner; The Denver Post didn’t even write on it the next day.
But there was big national news concealed in the district’s press release: Denver’s important experiment — welcoming top charter schools into its system through a common enrollment system, co-locations, and the sharing of best practices — is paying big dividends.
That payoff is a message that needs to be heard in cities such as L.A., Boston and New York where charter-district relations remain locked in a combat zone. The bottom line: Cities that make charters combatants rather than partners cheat their own students.
There’s a second takeaway from the Denver success story, where the district offers parents a choice of traditional schools, hybrid innovation schools and charters. When districts refuse to partner with top charters, they miss out on a way to make themselves successful — the higher performances turned in by those charter students get credited to the district.
That second point goes way beyond a public relations issue: More students actually succeed. A true win-win.
Here’s what charters add to the education bottom line in Denver: Six of the 10 highest-ranking schools are charter schools, including four campuses of the homegrown DSST, University Prep and a KIPP school. Among those six charter campuses, four enroll a higher proportion of low-income students than the district average. By contrast, the top-rated traditional schools serve mostly higher-income students. 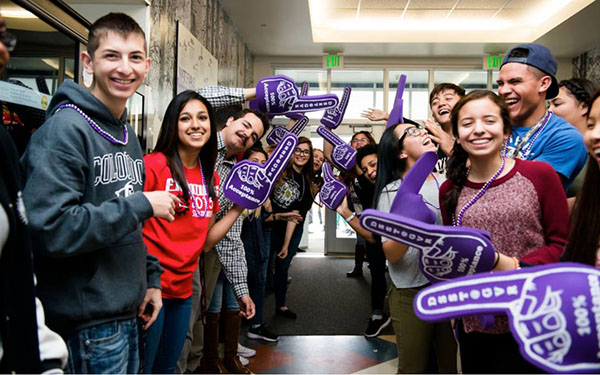 Green Valley Ranch High School in Denver celebrating being named a National Blue Ribbon school by the U.S. Department of Education in September.
That means the Denver partnership succeeds with the very students that other districts struggle with, including L.A., Boston and New York — all as a result of folding in the charters.
The cause for that success, concludes Robin Lake, director of the Center for Reinventing Public Education at the University of Washington, lies in the partnerships set up by Denver Public Schools.
“They are open to working with any school, district or charter, that can produce great results. And they are pretty seamlessly working with their charter partners to share district buildings and, increasingly, to try to learn from one another. They are much more concerned about results than labels.”
In short, it’s about school models that work best for kids, not models that are preferred by charter leaders, unions or superintendents. If a district school works best, great. If a charter works best, also great.
In Denver, schools that haven’t succeeded for years get closed, replaced by higher-performing schools. That’s a policy missing in cities where the education battle lines remain locked and loaded.
One of the top designers and administrators of the Denver model is Alyssa Whitehead-Bust, who just left the district to work as a consultant. One key in Denver, she said, was making the charters full partners, which means sharing revenue, facilities and the same accountability system.
“Our charters also have had a meaningful voice in shaping policy that applies to all schools,” she said. “That makes it easier for any charter, particularly the top performers, to scale.”
The approach has helped DSST, which currently serves 4,800 students in 12 schools. At full buildout, in 2025, DSST plans to serve 10,500 students.
“Denver charter school organizations like DSST Public Schools continue to run the highest-performing secondary schools in Denver — a track record that has been consistent for the last decade,” said Bill Kurtz, CEO of DSST, which garnered five of the 11 top schools in the district and five of the six top secondary schools.
Denver’s education record is far from perfect. Too many schools, including some charters, still struggle. And too many neighborhoods still lack good school options. But compared to most other cities, the district is reaching far more hard-to-reach students with quality schools.
It’s all about the partnership — a partnership that’s missing in most cities.
Charter schools continue to be controversial, even in Denver, but the controversy in Denver is minor compared to bitter disputes in cities such as Los Angeles, Boston and New York City. Kurtz, a veteran charter entrepreneur who follows developments in other cities, is in a good position to see what other cities are missing out on.
“Like Denver, charter schools are the top-performing schools in cities across the country like Boston and L.A. And yet, districts and local interests are preventing the expansion of the highest-performing schools in their cities. As a result, students and families are stuck in low-performing schools and denied access to schools that would provide an education equal to that of the best suburban districts in Massachusetts and California.” 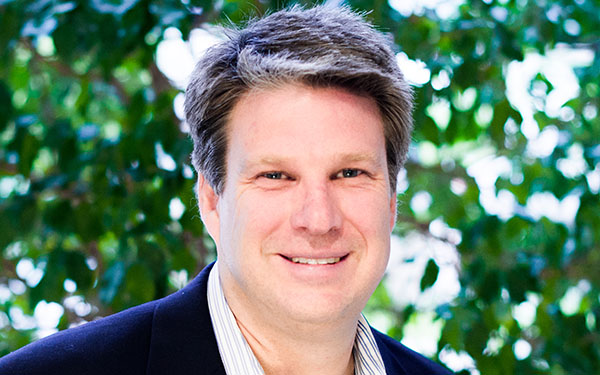 DSST CEO Bill Kurtz
An especially egregious example at the moment is Los Angeles, where a sharp drop in student enrollment (and a refusal to downsize the district accordingly) has pushed Los Angeles Unified toward bankruptcy.
That leaves the district in an awkward position: Either improve its own schools to attract more parents or force charter students back into district schools. The latter appears to be the more doable option.
One response by the school district, which authorizes most of the charters there, was to make their life miserable by vastly ramping up the paperwork accountability demands. Then, last month, the L.A. Board of Education voted to shut down five charters – all of them performing better than their district equivalents.
Denver has moved in the opposite direction. The district “operates in stark contrast to LAUSD’s recent hostility toward high-performing charters,” said Lake. “Denver’s approach is to replicate excellent charter schools and work with them as partners, while LAUSD seems to be looking for any excuse to close them down.”
Just for a moment, try to imagine LAUSD if, years ago, it had folded top charters there such as KIPP, Equitas Academy Charter School and Alliance College-Ready Public Schools into the traditional district. Maybe it would look more like Denver.
Boston is another city loaded with top charters — the best in the nation — where tensions are high and millions are being spent on an upcoming referendum that would lift the current cap on charters enough to allow an additional 12 charters per year in districts facing the biggest challenges.
(The 74: MA Labor Leaders Challenge Parents on Charters)
In recent years, attempts in Boston to pursue collaborations never got beyond the most rudimentary issues. There’s no Denver-style plan in Boston’s future.
One education observer familiar with both Denver and Boston is David Osborne, author of Reinventing Government, who lives in Massachusetts and has long been active in education reforms. His next book, Reinventing America’s Schools: Creating a 21st Century Public School System, will feature Denver as an education bright spot.
“Public-school students in Boston would benefit enormously from a Denver-style embrace of charters by Boston Public Schools. With so many outstanding charters and thousands of families on waiting lists, Boston could accelerate its improvement, as Denver has, by replacing failing district schools with high-quality charters. Perhaps if Question 2 passes, lifting the cap on charters a bit, that could happen. Unfortunately, the Boston Teachers Union will fight it to the death.”
(Osborne: A Note to Progressives: Remember, It Was Democrats Who Brought Charters to Town)
Just for a moment, try to imagine Boston today if, years ago, Boston Public Schools had folded in top charters there such as Brooke, Excel, KIPP and Match.
Let’s not be naive: The political compromises that made Denver possible were hard-won.
“It's easy to forget all the politics in Denver around this and years of advocacy work to get to this point,” said Andrew Rotherham, co-founder of Bellwether Education Partners, who has analyzed the charter sector for almost two decades. “The stable leadership there also helped a great deal. But people didn’t just sit around a table and look at the data and decide to agree. It will take the same efforts in other cities. Having good charters certainly helps, but what we’re seeing in Massachusetts is that the hard-core opponents oppose good charters with the same vehemence as lousy ones.”
True, and it’s possible that the compromises achieved in Denver are now beyond reach in cities such as L.A., Boston and New York. But there are scores of other cities where it’s not too late.
Education leaders in places such as Kansas City and San Antonio are beginning to look past the toxic education wars that have kept the two sides apart and asking what a partnership might look like. That needs to be nurtured.
In other cities, education and political leaders on both sides of the charter/district divide may need a stiff poke to move them in the partnership direction. Both teachers unions and superintendents passionately prefer the old system, in which children got assigned a neighborhood school, regardless of quality, and there were no charter schools offered as alternatives.
The only recourse, suggested Kurtz, may be asking parents and students to demand collaboration. “If districts are not going to support it, we need parents and students to demand it.”
Kauffman senior fellow Richard Whitmire is the author of The Founders: Inside the Revolution to Invent (and Reinvent) America’s Best Charter Schools.