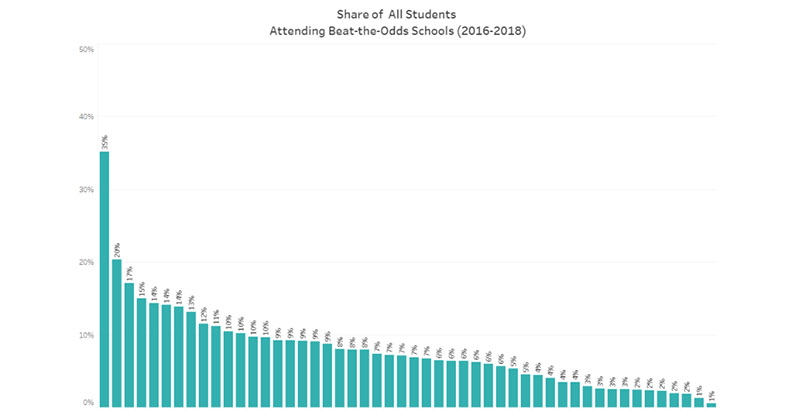 This is the latest article in The 74’s ongoing ‘Big Picture’ series, bringing American education into sharper focus through new research and data. Go deeper: See our full series.

Schools in Newark, Boston and Pittsburgh are the most successful at helping students outperform their academic peers, according to new research into K-12 education in the nation’s largest cities. Charter schools are often, though not exclusively, the major forces driving students’ exceptional learning outcomes, the authors write.

Released today by MarGrady Research, the study was funded by the New Jersey Children’s Foundation, a reform-oriented nonprofit focused on building collaboration between school districts and charters. A relatively new player on the education scene, the group has bankrolled earlier research touting the successes of education reforms instituted by former Newark mayor (and current senator) Cory Booker, including a major expansion of charters.

The most recent report takes a wider view, examining student academic data in 50 large American cities to determine how many of their students “beat the odds” — i.e., how many edge out demographically comparable students in other parts of their respective states. For example, if a given school in Albuquerque produces better state testing results than other New Mexico schools with similar racial and socioeconomic characteristics, it is considered a “beat-the-odds” institution.

The concept originally derives from a 2015 report released by the Center on Reinventing Public Education. That publication, which looked at the same 50 cities, also found Newark leading all others in the percentage of its students enrolled in beat-the-odds schools. The finding is frequently cited in debates around education reform in New Jersey’s largest city, which led the research team to update the report with newer data and a modified analysis.

“We definitely found that [the CRPE study] … still had a lot of traction in the context of Newark, and it has a fairly simple and compelling methodology,” said Jesse Margolis, MarGrady’s founder and the study’s lead author. “So it was something we decided to borrow from to look deeper into Newark and also look more broadly at a larger group of cities across the country.”

Kyle Rosenkrans, executive director of the New Jersey Children’s Foundation, said that his group had been curious to see which cities had improved on their performance from five years ago.

“Producing schools that beat the odds for children is the hardest work in public education,” he said. “It is the mission of education reform, and it is the equity and social justice mission that so many people bring to this work and have for years. The progress is slow and incremental, that’s what this study is showing me.”

Using figures from the federal EDFacts initiative and the Common Core of Data, which track statistics on enrollment and test scores for every public school in the United States, Margolis and co-author Eli Groves updated CRPE’s analysis to predict how schools in each city would perform on standardized tests. Those calculations took into account a school’s size, its share of students from various racial and ethnic groups, and its percentage of students eligible for free or reduced-price lunch (a commonly used proxy for socioeconomic status). Beat-the-odds schools were identified as those that significantly improve upon their expected performance on exams.

“This is very much a relative measure,” said Margolis. “The question is, how do schools in the rest of the state in the same year do as far as educating students who are low-income or who have traditionally had lower performance?” 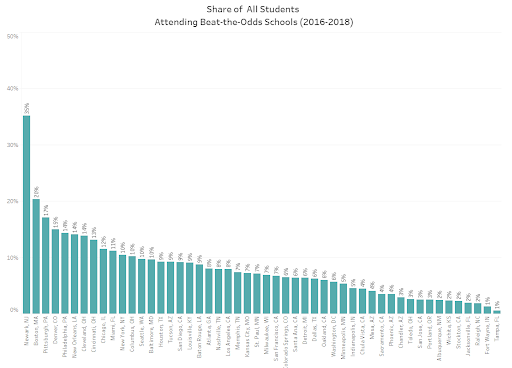 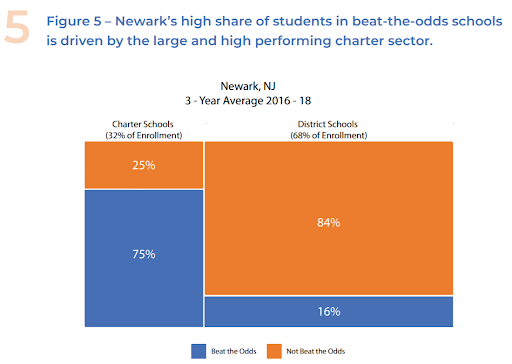 “It’s true in a number of cities — not just Newark, but Denver, Houston, Indianapolis, Los Angeles, Memphis, Nashville — that the charter sector is driving a lot of the outperformance,” said Margolis, adding that the finding was “certainly not universal.”

Pittsburgh, to take one example, featured the highest percentage of non-charter schools beating the odds of any city studied. The city also saw some of the largest growth in beat-the-odds enrollment over the past five years, along with Denver and Seattle.

By contrast, the authors noted, the cities of Baltimore and Cincinnati, which had ranked along with Newark as leaders in CRPE’s original study, have seen the most significant erosion of late. Nine percent fewer students in Cincinnati, and 11 percent fewer in Baltimore, now attend beat-the-odds schools, compared with 2012.

Disclosure: The City Fund provides financial support to the New Jersey Children’s Foundation and The 74.