When 1 in 10 Kids on Campus Doesn’t Have Enough to Eat: Inside the Campaign to Help Feed Hungry College Students 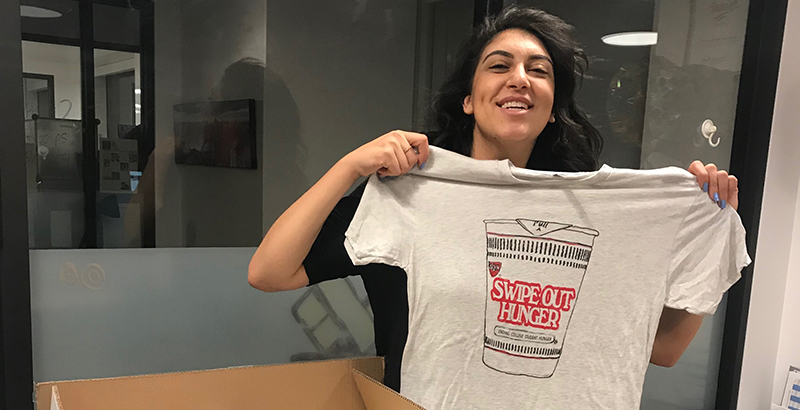 Rachel Sumekh, founder and CEO of Swipe Out Hunger, holding up a T-shirt with a ramen noodle cup to challenge myths about college student hunger. (Photo courtesy of Rachel Sumekh)

Joshua Ibarra is a fourth-year journalism and Japanese language student at East Los Angeles College. He takes four courses and walks to and from class across the 82-acre campus in Monterey Park, California. He lugs his backpack, filled with $200 textbooks, his pockets as empty as his growling stomach.

Ibarra is forced daily to decide between transportation to get to school or food to feed himself through the day — his budget does not allow him to have both. He doesn’t go to the school cafeteria because he doesn’t have a meal plan and the food items that were once moderately priced, Ibarra says, now cost $2 to $3 more.

“If I’m in class and I’m hungry, I just stick through it,” he explained. “Now that I don’t have financial aid, it’s a bit more difficult. Sometimes I rely on friends. The hope of someone or some [school] event coming along, you know you’ll get free food.”

He is not alone: 13 percent of students at two-year colleges and 11 percent of those at four-year schools do not have enough to eat. Students who are food insecure are more likely to miss a class, drop a class, or not purchase required textbooks. Not having enough food to eat is associated with poorer health and lackluster academic performance, as well as anxiety and depression in some cases — all of which place additional barriers for low-income students determined to make it to and through college.

The dire situation some college students face when it comes to having enough to eat received national attention in November after students at Spelman and Morehouse colleges in Atlanta staged a hunger strike to change a policy that prevented them from giving their unused meals to classmates in need. Student protesters ate vitamins and drank water in solidarity with the roughly 1,400 students on both campuses who did not have a meal plan or regular access to food at school.

The strike lasted for about a week when Aramark, the $9 billion food service giant, and Spelman reached a solution to reduce food insecurity on campus. Spelman president Mary Schmidt Campbell released a statement saying the college will provide up to 7,000 meals during the second semester to students who live off campus and are facing hunger. A petition circulated proposing that Spelman and Morehouse implement a Swipe Out Hunger system allowing students to share excess swipes on their meal plan cards.

Rachel Sumekh, founder and CEO of Swipe Out Hunger, told The 74 that she is working closely with student leaders and administration to bring the “Swipes” program to campus. The longtime hunger-free-campus advocate believes that a basic need like access to food should not stand in the way of a student and his diploma. The nonprofit works closely with colleges to implement meal-sharing programs, serving over 1.4 million meals to food-insecure students on 36 campuses since it was created in 2009. 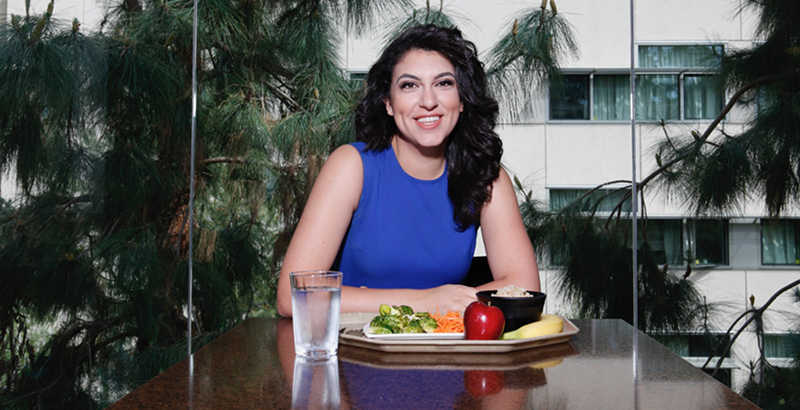 Sumekh points out that the students her organization helps are the same ones who qualified for free and reduced-price lunch when they were younger.

“Do you accept that it’s OK for us to give free food to K-12 students? [We need] to carry that same compassion that we have for a middle schooler to college,” she said. “What changes when that same kid hustles and gets to college that no longer makes them worthy of getting food so they can study in school?”

Sumekh, named to Forbes 30 Under 30 Social Entrepreneurs in 2017, believes that her organization is shepherding a breakthrough and hopes to share and recreate its success elsewhere. “We’re championing this idea that [colleges] are responsible to consider the basic needs of their students.”

Sumekh said she received an email a few weeks ago from a higher education official in New York governor Andrew Cuomo’s administration interested in setting up a Swipes program at SUNY Albany.

Ibarra, 23, lives with his grandmother and has a part-time job working security at a nightclub to pay for school. When he did receive financial aid, Ibarra said he still struggled.

“The common misconception was that I had money … It’s not like I can just freely spend that money on whatever I want,” he said. The funds had to cover tuition and supplies, and last for the fall and spring semesters, along with intersession and summer.

College is expensive. College textbooks prices have risen over 1,000 percent since 1977, with the average price now ranging between $200 and $400 per book.

“After paying for my school supplies, fees that I have to pay up front for my health insurance and other incidental expenses, usually half of it is gone by the first two months of the semester,” Ibarra explained.

While the cost of higher education skyrockets, financial aid programs could be shrinking. Congress is in the process of rewriting the Higher Education Act. The GOP-controlled House has put forward the “Promoting Real Opportunity, Success, and Prosperity Through Education Reform Act” — known as the PROSPER Act — which, among other things that could hurt low-income students, would eliminate the Federal Supplemental Educational Opportunity Grant. That grant provides as much as $4,000 for those with “exceptional financial need” and was used by more than 1.5 million students in the 2015–16 school year.

College student hunger is a pervasive issue, one that Sumekh thinks is perpetuated by worn-out stereotypes that glorify the hardships of university life.

“That narrative is a distraction from the reality. In many conversations, people have painted that sort of struggle — that, of course, you struggle your way through college — to be almost like a rite of passage,” she said. “It’s almost respected in the narratives today, and I think that’s really preventing us from seeing the problem.”

“One of the things we really believe in at Swipe Out Hunger is, how do we change the narrative there?” Sumekh said. “One of our images we’ve been using a lot lately was the ramen noodle cup and replace the words ‘Cup of Noodles’ with ‘Swipe Out Hunger’ to kind of say, ‘Yo, this isn’t OK anymore.’ It’s destructive to the work, that we have that narrative of the broke college student.”

Giving students a hand up, not a handout

Ibarra is the first in his family to attend college. Coming from a family with origins in Mexico and Peru, he says, there is a disconnect between what they think college is like and the reality of it all.

“My family always says, ‘Go ahead and study, do your best.’ But it’s not always about studying. Because they never had this opportunity … it’s difficult for them to relate to you,” Ibarra said. “Even though they’re not really helping, you still say thank you and acknowledge that they’re trying to help you. It’s not to hurt their feelings to let them know that I’m doing the best I can.”

Sumekh, a first-generation American born to Iranian immigrant parents, experienced childhood hardship and difficulty navigating college as well. When she was applying to school, she did not fill out the Free Application for Federal Student Aid (FAFSA) her first year simply because her parents did not know what it was.

Being the CEO of Swipe Out Hunger has made her acutely aware of the challenges that food- insecure students face, and for her, the support and resources that her family eventually received literally were the difference between an American dream realized and a dream deferred.

“We’re not trying to give handouts. My family grew up on food stamps and it was what gave my parents the capacity and the mental space to pursue the American dream that they moved to this country for. Before I finished middle school, they were thriving, they achieved the American dream because there was this public service that allowed them to do that,” she said.

“For people who hustled and got into college, that’s the best investment we can make. These people are on the path to greater earning potential, to living out their dreams, and food, this very simple low-cost thing, might be the thing that’ll stop them.”